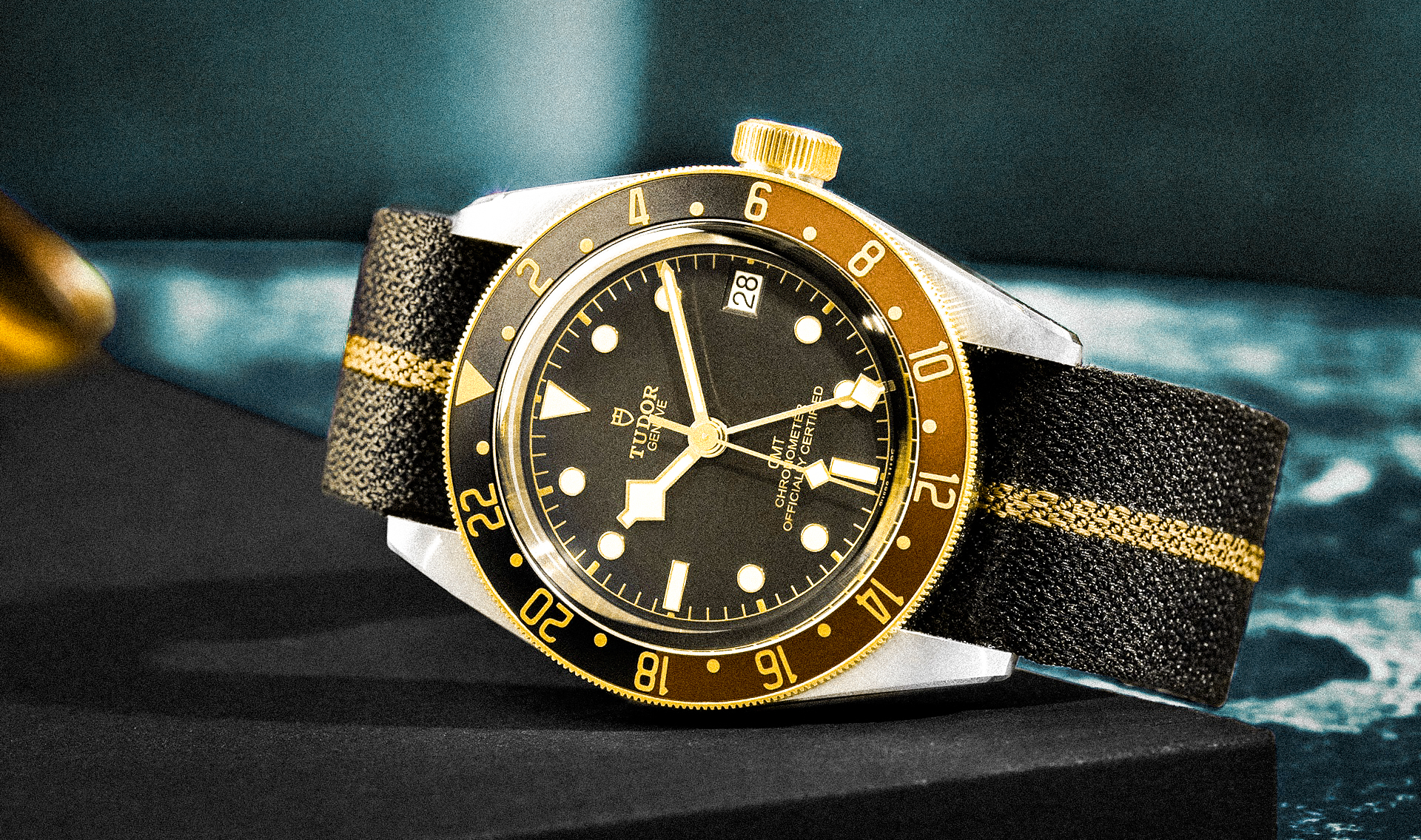 Men need a quality timepiece, it’s as simple as that. I like one built for travel, and one with some flash.

To that end, it’s hard to beat a Greenwich Mean Time (GMT) complication. These pieces are purpose built to track multiple time zones. And when it comes to GMTs, Rolex–and its little brother, Tudor–have got you covered.

There’s a good chance you’ve seen the famous Rolex GMT “Pepsi,” either on Magnum, P.I.’s wrist or here on Field Ethos. Then there’s the “Coke” bezel variant, and finally, the “Root Beer.”

The original Rolex Root Beer is admired by irreverent collectors and appreciated for its, ahem, “unique” appearance. Let’s be honest, the two-tone setup with a brown dial is too 1970s vintage for a lot of buyers. There are, however, many hardcore fans of this flashy, flagrant, and far-from-low-key look; its status as a collectors’ item is on the rise.

Of course, at this point the casual observer might be a bit confused. Pepsi? Coke? Root Beer? Are we ordering at the Arby’s drive through or are we shopping for freakin’ watches?

To get a grip on what’s going on here, it pays to remember that names are key. They’re one word wonders: Ferrari. Glock. Madonna. Even Shakespeare once wondered: “What’s in a name? That which we call a rose by any other name would smell just as sweet.”

Often the only thing more important than a formal name is a nickname. As Hodinkee explains, “They capture the shape of the case, or the color of the bezel, or an important person who wore it. The ‘why’ becomes less important over time. The nickname is what lasts.” Anyone still going by their high school football nickname gets it. The notoriety of a nickname can make or break a watch. Which brings us to the Root Beer…Float.

Now, given the outrageous popularity and widespread scarcity of Rolex watches these days, it’s almost impossible to get your hands on even basic models, let alone a Root Beer. Thankfully, Tudor has a solution. They’ve recently released their version of the famed Root Beer. Of course it’s less expensive, but it’s still well made and shows true GMT heritage.

Tudor is a younger, more casual brand than Rolex. And to understand the “Root Beer Float” nickname, let’s imagine it’s summertime. And you’re a child… . What are you supposed to do when you’re thirsty…but also craving ice cream?

That is where the root beer float comes in. It’s a cold glass of root beer poured over vanilla ice cream. Now, stick with me for a moment as we mix metaphors. The Tudor builds upon the classic sport watch formulation (the root beer), but is a bit more fun and carefree (the ice cream).

Given Tudor’s typical Swiss restraint, they don’t describe this watch with the prose it deserves. Instead of trumpeting the brand’s history and tough as nails reputation, Tudor simply says, “the Black Bay GMT Steel & Gold also gives a subtle aesthetic nod to the history of this watchmaking function.”

No one should give you grief about the Tudor, but if they do, here are two likely scenarios. 1. If they’re rocking an AP Royal Oak on the private j to Ibiza…fair play. Take the L and move on. 2. If they start droning on about the virtues of their Apple Watch, you can safely dismiss them and their groupthink.

Not to mention the fact that, with the money you save from purchasing the Tudor instead of the Rolex, you can buy plenty of whiskey to spike that float. After all, it’s summer, you’re thirsty, and you’re a man.