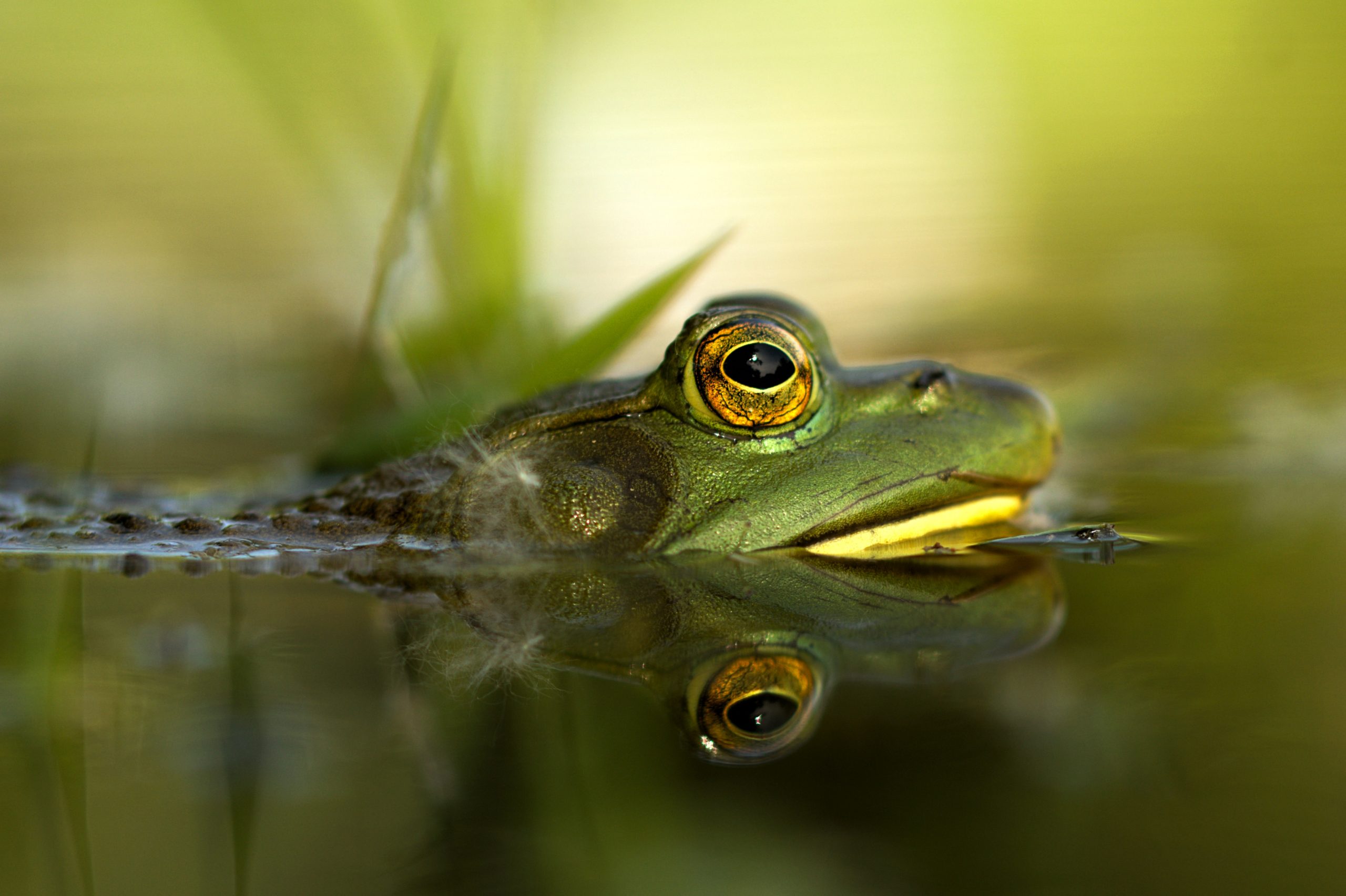 In Seamus Heaney’s poem “Death of a Naturalist”, the speaker describes in vivid detail how his curiosity as a child about the bullfrogs living in a bog near his town morphs into the terror of being sucked down under the mire by the jellied spawn of the “mud grenades”. The account is powerful and graphic albeit adverse. Had I been in those Irish shoes, I’d probably have jigged me-self far and away from that amphibian infested flax dam as well.

But the shoes I was wearing when I first encountered bullfrogs was a pair of worn blue KangaROOS hurriedly slipped on one night to run outside after my old man had called into the house, “Joshua! Come out here. I want to show you something.”

What I was shown was a bit more graphic than Heaney’s experience. On an orange nylon stringer I had only seen used for fish dangled the glistening green goblin bodies of fat frogs pierced through the sallow bellow of their lower jaws. Each frog’s stubby arm asynchronously swam in the air while its wide webbed feet groped at the next frog in line in an effort pull itself up for relief.

Dumbstruck and mortified, I grinned and nodded.

He and his buddy had been frog-gigging in the cypress slough behind the house. They had been threatening to go ever since the springtime carol of croaking could be heard reverberating from earth to sky.

I had seen the tools of the hunt before in Daddy’s shop; a five-pronged fork with sharp barbed points that looked like a straightened hand rake. There was one affixed to a length of sturdy bamboo leaning in a corner with the cane poles we used to jig fish and one still in its packaging that said “Fish Spear” which hung on a nail stuck in the pegboard above the cluttered bolt bin. Both conjured thoughts of ancient aquatic adventures. On that night, however, both gigs with bits of froggy flesh beginning to dry hard in the barbs were laying in the canoe which had been pulled up to the house from the swamp.

Under the warm cone of light that cast from the eave of the shop and flickered with the entranced dance of insects, I watched Daddy dress frogs. Once unthreaded from the stringer each frog would receive a severe smack in the head with the dull side of a cleaver, be stripped of its skin with a pair of catfish pliers, and then decapitated. He would cut open the stomachs to show me the bugs, worms, and baby frogs the croakers had been feasting on. And never one to waste, Daddy always kept the backs and arms as well as the legs. “There’s meat on them bones too, son.”

There wasn’t much froggy activity after that initial introduction until my teenage years. At some point, the crooning echo from the swamp awakened a blood lust within me and my boon companions so much so that weekend nights were spent paddling among the lily pads with .22 pistols and gigs at the ready. Spotlights blinding the marble eyed blobs on mud banks and logs, we’d run them through with our forked spears and then deposit our quarry in 5-gallon pickle buckets.

We learned that in close quarters where a gig pole couldn’t be maneuvered in time to skewer a frog that a deft whack with a sculling paddle would flatten a frog out like a flapjack. And extra spooky frogs sinking slowly in the beam of the spotlight to avoid the joog of the gig could be quickly popped with a .22. Both methods had their danger in that when reaching for a stunned or shot frog in the water, there was a high probability of snake or even gator bite.

There were other things we learned in the stagnant murk. Things like the smoke from Swisher Sweet cigars and tobacco pipes kept the mosquitos out of your face. And that no matter how careful we were, at some point…literally… the business end of a frog gig was bound to puncture us through jeans, boots, and even ball caps.

After one particularly late night of frog-gigging, we learned the toughness of frogs. In our haste to grab a bite to eat, a shower, and then a bunk for the night, we skinned and chopped off only the legs throwing what was left into a #2 washtub. I was awakened at daybreak by my father who said, “Go pick those frogs up out of the yard before your mama sees them”.

To my horror, several of the mutilated bullfrog uppers had climbed out of the gutbucket and were dragging their entrails through the grass. Their black dilated pupils were hollow and the gory torsos traversed in aimless circles.

“Y’all wasted all that back meat,” Daddy said.

I gathered the repugnance, put them back in the washtub, and drove to a nearby bridge. A shock of shame grabbed me as I watched the frog halves watch me while I poured them over the side of the bridge to become food for the fish and turtles.