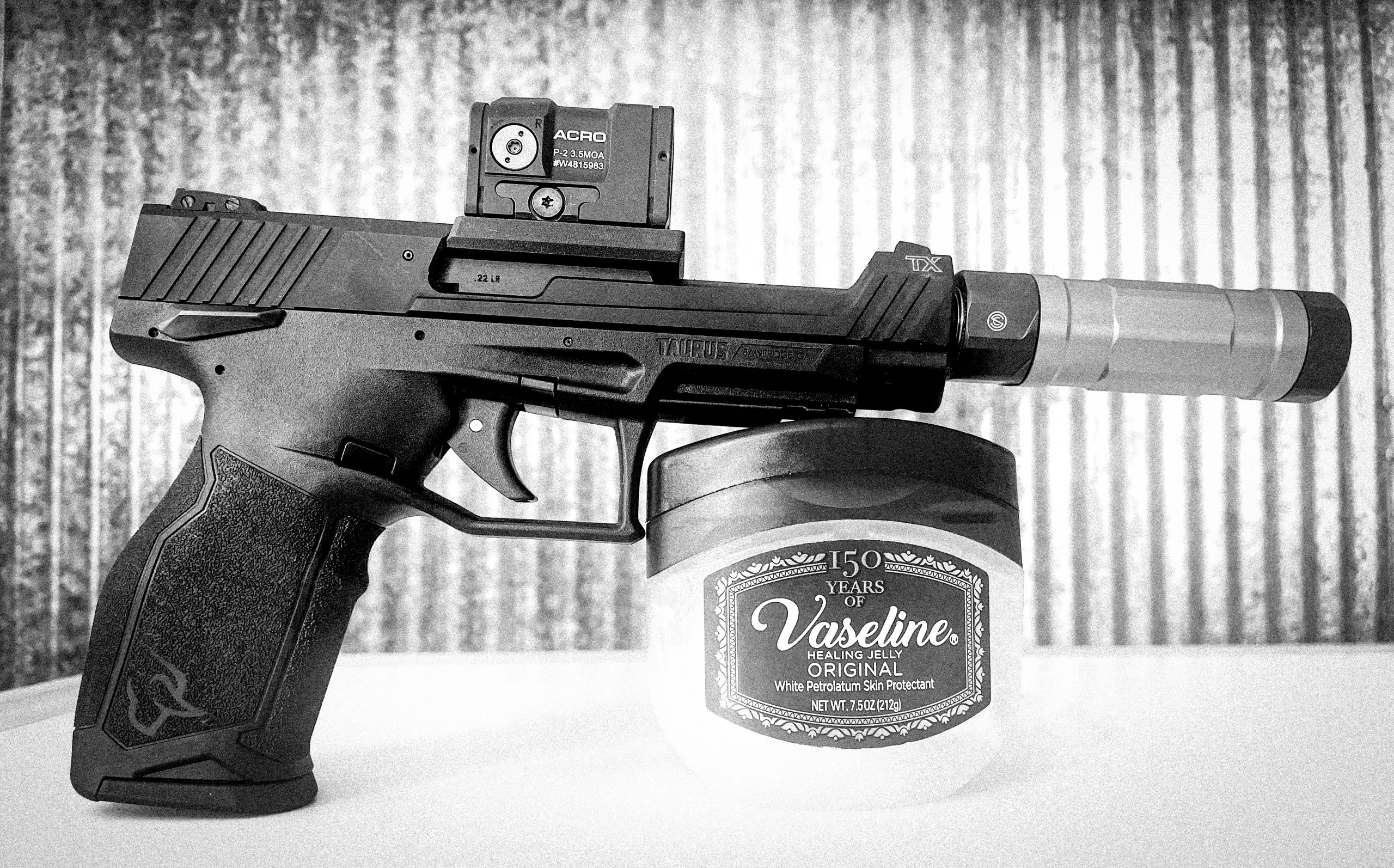 Before we dive into this handgun review, let’s first discuss the elephant in the room:

What’s up with 10-round .22 pistols? Ten rounds were awesome back in 1915 when the Notorious JMB unleashed the Woodsman to the world, but it has been over a 100 years.

Gun designers have figured out how to cram over 20 rounds of 9mm, mid-teens of 10mm and a baker’s dozen of 45 ACPs into a full-size pistol, but we are somehow stuck at 10 rounds for the deuce-deuce? Evidently getting just one more in is tighter than an inmate on his first night in county lock up.

That said, I’m glad someone other than Kel-Tec agreed and made a full-capacity .22—thank you Taurus!

Being a .22 nut, I bought the first TaurusTX 22 as soon as it became available. About a year later I heard rumors that a “competition” model was in the works. I couldn’t imagine how a competition model could be any better. My standard TX ran magazine after magazine of all sorts of ammo (often mixed and matched and loaded in bulk from my range leftovers) without a hitch and clustered them into golf ball-sized groups at 25 paces. Then my local shop received a TX 22 Competition, and since I believe there is no such thing as too many rimfire handguns in a safe, it came home with me.

Much of the TX family lineage between the two guns is identical; same grip profile, same 16-round magazines (Taurus includes three of them in the box), similar ½ x 28 threaded muzzle (the Competition is a bull barrel so no adapter collar is needed), but most importantly the Competition features a totally unique skeletonized slide for red dot mounting. It’s similar in concept to the Beretta 92’s open slide design, but the base for the red dot directly mounts to the barrel. (Two included plates fit 90 percent of red dots on the market).  Why is that important you may ask?

Well, if you are trying to wring every bit of accuracy out of a gun, eliminating the slop between barrel and slide (where a red dot is normally mounted) is necessary.  Traditionally, this was attempted by reducing tolerances, but this comes with tradeoffs; one is cost. Tight, precise tolerances between the slide and frame costs money in terms of labor and hand fitting. (It’s why Colt Woodsmans are not made anymore). Two, it can create reliability issues. If a tremendous buildup of gook occurs between the two surfaces, you have problems. Mount the sight directly to the barrel, and the tolerances between slide and barrel no longer matter.

The proof is in the pudding: While the standard TX is accurate, the Competition is one of the most accurate rimfire pistols I have seen in quite a while. With an Aimpoint ACRO mounted on top I was regularly shooting groups around an inch at 25 yards with a variety of decent quality ammunition. Rest it on bags, shoot premium ammo like CCI Green Tag or Federal Match and it will make you look like Jessie Harrison (figuratively speaking of course, but not speaking about her figure…never mind).  As for reliability, it was possibly even more reliable than the standard TX, which is to say as reliable as a 22 can ever be—the weak link is ammo.  Feed the TX quality ammo, keep it clean and it will run 98 percent of the time.

So, in the TaurusTX 22 Competition I believe I’ve found the perfect plinking 22 pistol…that is until I just looked online to check some stats and realized there is now a TX 22 Competition SCR (Steel Challenge Ready), complete with compensator, TandemKross extractor, match bull barrel and custom feed ramp.  Well shit. Luckily there is room in the safe for another.  $425

16-round capacity. Damn-good accuracy at an affordable price

Now I need the new SCR