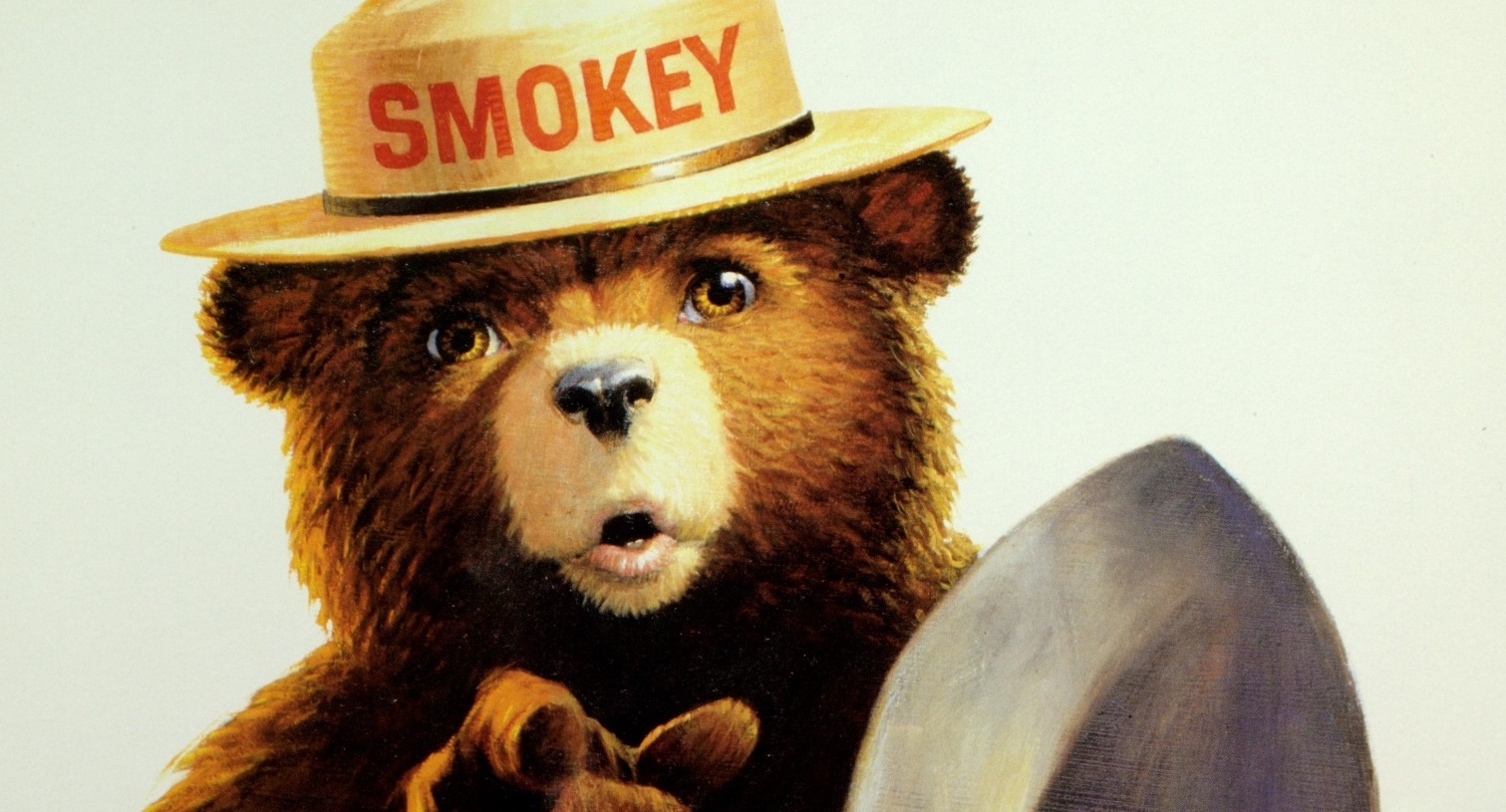 Only in America would the populace need a government-created and sponsored cartoon bear to tell it not to burn forests to the ground.

I bring you … Smokey Bear.

Not, Smokey the Bear.

More on the name later.

Growing up, I loved the twisted story of Smokey’s origins. The story as I knew it was that Forest Rangers found a bear cub more or less on fire high up in a tree engulfed in flames, rescued it while its fur was still smoking, jokingly named it “Smokey,” then used it to combat careless idiots burning down huge swaths of the American landscape.  The only problem with this story, however, is that it doesn’t detail the true origins of Smokey Bear.

Our story begins back in World War II when almost every able-bodied man was involved in the effort. Because this caused the U.S. Forest Service to lose a ton of the hands needed to put out forest fires, the agency ramped up its efforts on the prevention of fires rather than actually putting them out. Walt Disney helped in this endeavor when, in 1942, he allowed the Forest Service to use characters from the animated movie Bambi to appear in fire prevention campaigns for one year only.

While I’ve never seen one of the advertisements from this time, I can only imagine how horrible they were. Bambi says, “Hey humans! You shot my mom! What are ya’ gonna do next? Burn the forest down around me?!”

Top men in the government decided that a new mascot was needed. They chose to go with a bear and named him after “Smokey” Joe Martin, a New York City Fire Department hero who lost his vision during a heroic 1922 rescue.

Smokey Bear was authorized on, and his birthday was declared as, August 9, 1944. Smokey appeared on a poster wearing jeans and a campaign hat while dousing a campfire with a bucket of water above the message, “Smokey says – Care will prevent 9 out of 10 forest fires!”

Doesn’t exactly roll off the tongue, does it?

Which is probably why they changed it three years later.

In 1947 Smokey officially declared what would be his slogan for five decades: “Remember … only YOU can prevent forest fires.”

Three years later, in the spring of 1950, firefighters came across a three-month-old black bear cub while trying to extinguish a fire in the Capitan Mountains of New Mexico. Although the bear had hightailed it up a tree to escape the fire below, his hind legs and paws were scorched. Firefighters rescued the bear and named him …

He was later renamed “Smokey” because his fur was smoking when firefighters found him. New Mexico Department of Game and Fish Ranger Ray Bell heard about Smokey and took him to Santa Fe, where he, his wife Ruth, and their children cared for the cub with the help of a local veterinarian. As you can’t keep a half-scorched bear cub in your yard without drawing attention, Smokey quickly made national news. Soon, people from all over the country were writing to Smokey, care of the Bell’s, to inquire about his recovery.

Note To Those Who Wrote to Smokey: Bears can’t read or write! You wasted your time drafting a letter to a burned bear cub!

Bell wrote to the Forest Service to ask if they wanted Smokey for conservation efforts. The agency jumped at the chance and Smokey was whisked off to his permanent residence at the National Zoo in Washington, D.C. Zoo media claims that Smokey proved, “one of the most famous residents in the zoo’s 130-year history.” Smokey flourished at the zoo and soon grew into a 400-pound behemoth. Zoo officials tried to find a mate for Smokey starting in 1962. They paired him with a female bear named Goldie but after nine years of mating and no offspring, officials went the adoption route. They gave Smokey and Goldie an orphaned cub from New Mexico named “Little Smokey.”

Smokey Bear was retired on May 2, 1975, at which point Little Smokey officially became “Smokey Bear II.” The original Smokey dropped dead on November 9, 1976. His remains were buried at Smokey Bear Historical Park in New Mexico beneath a plaque that reads, “This is the resting place of the first living Smokey Bear … the living symbol of wildfire prevention and wildlife conservation.”

I have no idea when Goldie bear died because presumably, nobody cares.

Back to the cartoon version …

Smokey is widely considered to be the most popular and successful government campaign of all time. Smokey has appeared on posters, on the radio in ads with Bing Crosby, Roy Rogers, Dinah Shore, and others, and has starred in a movie, several TV shows, and an untold number of commercials. His dolls are bestsellers, he has appeared on a postage stamp, was mentioned in The Beach Boys’ 1964 song Drive-In, and receives so many letters annually that he has his own US Postal Zip Code (Smokey Bear Washington, D.C. 20252).

Unfortunately, this massive popularity led many to believe that Smokey has a middle name.

His name is officially “Smokey Bear.”

It is not “Smokey The Bear.”

This confusion stems from at least two sources. The first was in 1952 when songwriters Steve Nelson and Jack Rollins wrote the song “Smokey the Bear.” Steve and Jack added the “the” because it helped the song flow. The song was extremely popular and led to folks believing the bear had a middle name. The “the” mistake was made again in 1955 when Little Golden Books referred to Smokey as “Smokey the Bear” in one of its books.

Again, his name is Smokey Bear.

And that bear has endured as America’s most popular symbol of conservation for 78 years.

Here’s to ya’ Smokey, and thanks for all you do!

Now I’m going to go have a cigar.