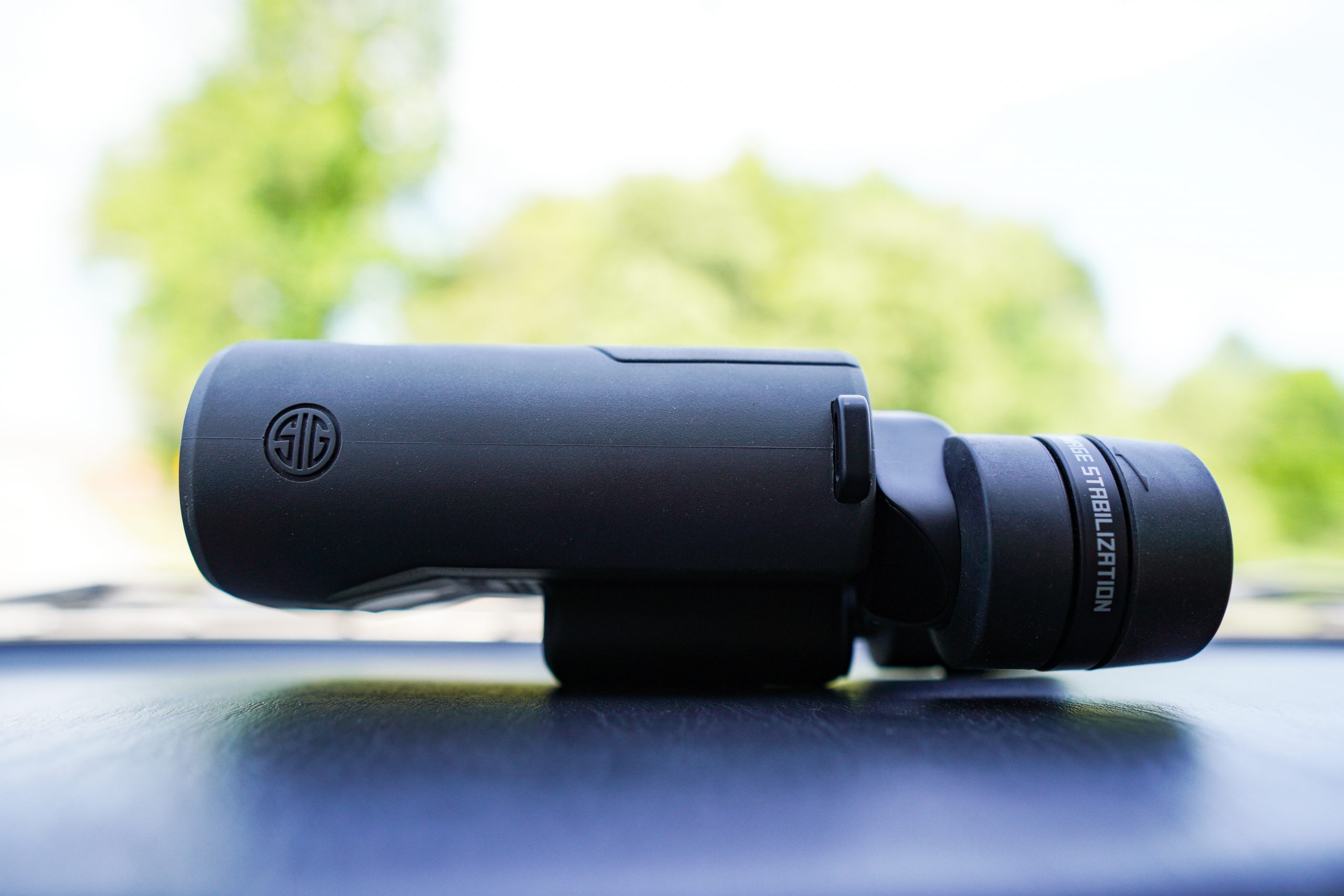 In the world of hunting and shooting gear, there’s not much new under the sun.

Around six or seven years ago, I heard Sig was getting into the optics market. I’ve seen gun companies do this before and rarely has it gone well for them. Here today-gone tomorrow seems to be the rule and I figured such would be the case with whatever Sig optical products made it to retail.

A short time later I tried their early Kilo rangefinders, and I could tell they weren’t just slapping their name on 3rd party junk.

Today, Sig Electro Optics is a solidified contender. I’ve personally used their Kilo 2400 ABS rangefinder for several years as my go-to, and it’s produced great success on difficult long-range scenarios in the field. But until this year, I hadn’t yet tried their binoculars. When they told me they were sending me their new image stabilizing binos, I thought to myself, ‘Whatever. Sounds cool enough.’ and didn’t think much more about it.

A few weeks later a box showed up at the office.

Before we get into the performance of Sig’s latest and greatest thing, let me explain a few simple optical truths. First, binos are hard to hold still. Things look even less steady with more magnification as higher mag exaggerates whatever minor tremors are in your hands – the slightest movement seems to have your intended focus area jumping all over the place. Second, if you ask most experienced hunters what bino setup they prefer, you’ll likely get two common answers: 8x something or 10x something…because if you go higher than that you’ll need to anchor them to a tripod or rest them on something sturdy to see effectively.

The new Zulus have 16x magnification -unheard of for a normal set of binos designed for handheld use. They’re also lightweight which should actually make them harder than normal to use…and they are…until you throw the lever to turn stabilization on.

Once the lever hits ‘on,’ everything changes.

Not really…it’s just an internal gyroscopic mechanism spinning up that makes every movement of your hands seem very slow and fluid. To simplify things even further, it just smoothes shit out.

All those jerky movements?

So what does this all mean?

With the ZULU6 you can see at much greater distances with a much clearer and smoother image than anything you’ve probably ever seen and you won’t be looking for something to rest them on. Just stand, hold, observe…and be amazed.

For every one that I’ve used as a guinea pig on this project, I’ve done the same thing. I hand them the Zulus without stabilization turned on. Each person has had almost the exact same short conversation with me.

Them: Okay, I can see that rock.

Me: Alright. With your right index finger, push that lever while you’re looking through the binos.

Sig showed up on the optics scene a few years back and quickly proved they were serious about carving out a top spot in a crowded market and they’ve continually gotten better. Now, with the ZULU6 they’ve shown the competition that they’ve moved beyond focusing just on quality. They’re after true innovation. They’ve arrived with the ZULU6.

Working in marine environments I have used some big/heavy stabilized binos that worked great for staying focused on objects at a distance when whatever vessel I happened to be on was rocking on the water. Again, these are big, they’re heavy, and, at the time, they were known for being very expensive.

Would I buy them?

I bumped them in the truck and threw the lever on and drained the battery. Maybe they could make gen2 harder to turn on.