Room for Rent: Bluebirds Apply Inside 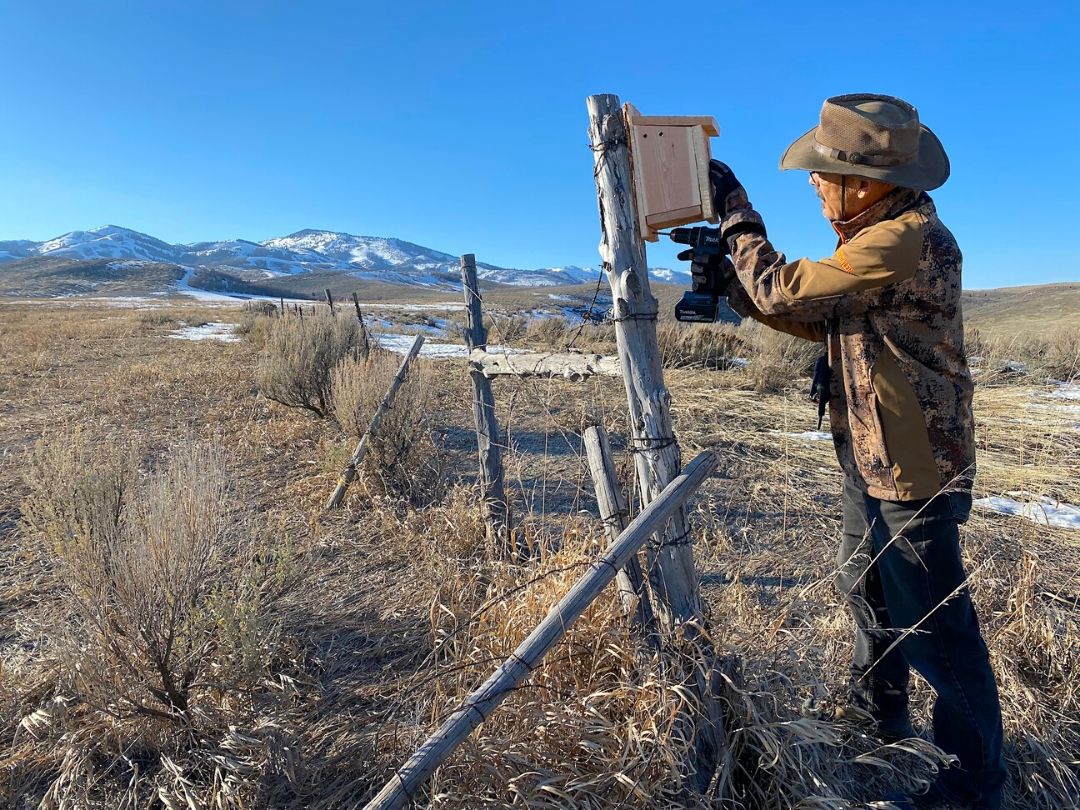 Humans are weird. We are the only species that expends effort to benefit other species. No strings attached.

Odd isn’t it? You don’t find altruistic beavers removing their dams to relieve flooding in upland ground squirrel colonies. They don’t stop gnawing down aspens because there’s a nest of oriole chicks in the branches. You don’t see bears passing up newborn elk calves so they can mature and produce calves of their own in two or three years. Yet you regularly see humans, especially humans who hunt, investing time and resources to create room and board for myriad other creatures. We’ll limit our hunting to a few days a year, to a couple of birds a day. We’ll close all hunting for years, sometimes decades while restoring habitat, planting forests, burning grasslands. Hunters will trap and net and haul and reintroduce species from elk and turkeys to falcons and otters, toads and bats.

I see no genetic component driving such activity, no survival benefit, yet here we are, Betsy and I, pounding fence posts, cutting boards, drilling holes and erecting homes for sentient beings we don’t know, for species we will never eat. Mountain bluebirds. Tree swallows. Black-capped chickadees. These birds will never keep us warm, never shelter us from the storm. We’ll probably never see the screech owls we hope will nest in the boxes we’ve hung in our woods. But the rolling trill of their whistles of a summer night will lift our spirits. The cerulean flash of a cock bluebird flitting over the sage will feed something within us, an esthetic as sustaining to our mental health as pheasant meat to our physical strength.

No, this peculiar urge to build and erect housing for birds is impossible to articulate. Yet there it is. Indulging it seems to fill a need as ancient and ingrained as hunting itself. Absurd. And unique to this one species, this naked ape. Us.

Of course, Betsy and I are not alone in this. We just have a bigger opportunity to respond. Acres and acres on which to build. Grasslands and sage hills and woods in which to lure and house birds.

Humans for centuries have been providing nesting sites for wrens, storks, ducks, finches. The backyard bird house is almost as ubiquitous as the backyard lawn, the front yard shade tree. Even the most urbane apartment renter often hangs a tray of seed from the window, waters a small plant on the sill. Two million years of genetic imprinting are hard to ignore. We have dirt under our fingernails. And when we embrace it we are uplifted.

So Betsy and I are slum lords. Real estate agents selling at a loss, demanding no rents higher than a flash of color, a peek at a cup of eggs, a bubbling song of spring borne on the breeze. We’ll be paid in full at the glimpse of gaping fledglings begging a bite, of sleek-winged swallows hawking insects over the grass, kestrels carving the skies over the barn.

– We are living with the land and loving our welcomed obligation to increase it.