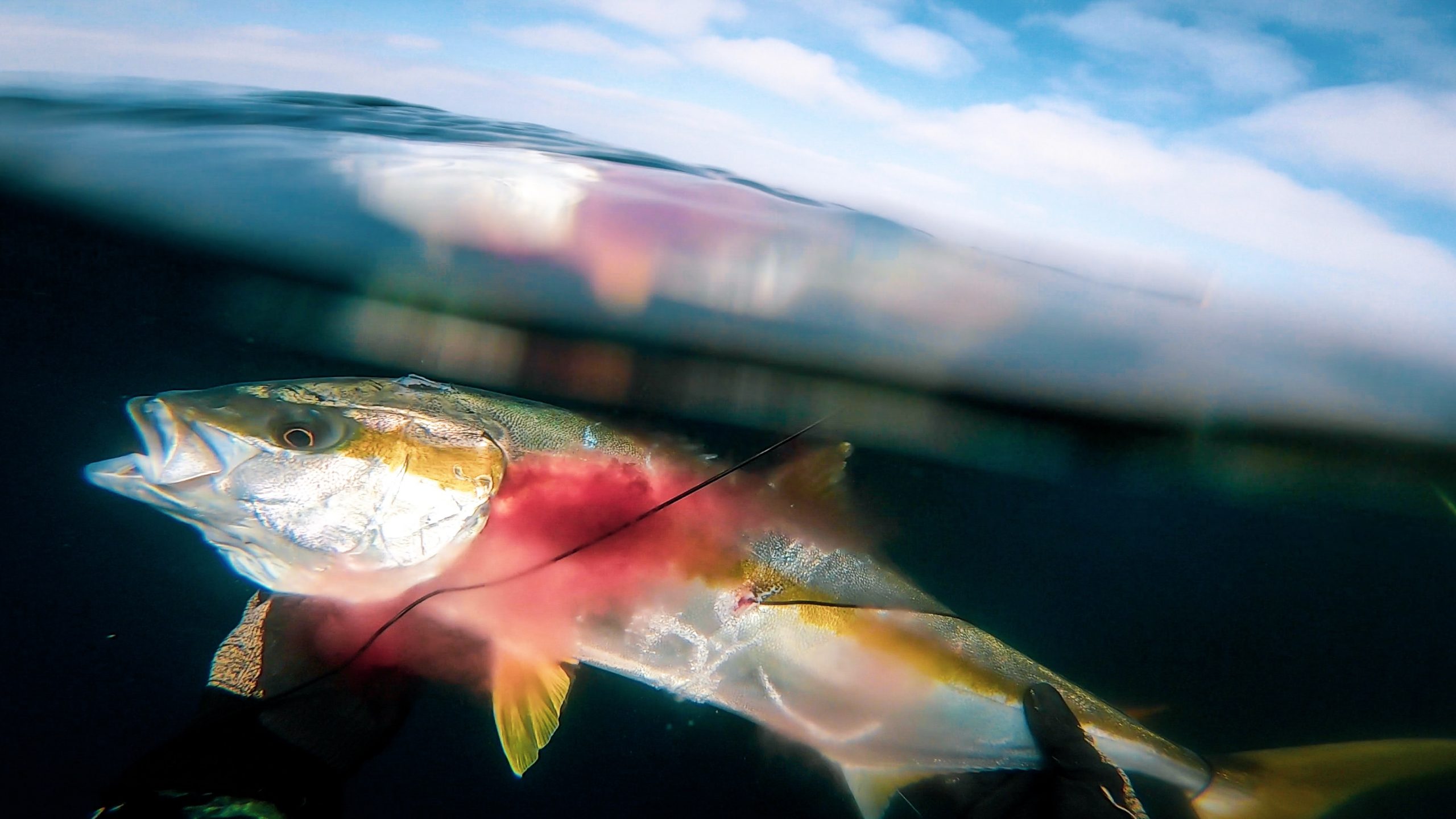 Terry’s words flashed through my mind as did the pain. White hot in my chest, like a branding iron. The fish gave another slap with its tail. I couldn’t hold on any longer, my grip eased, and just like that it was free, blasting out of my arms at full speed. I snatched the shooting line as it went tearing by, trying to slow the fish before it took out too much line again. With just the slightest pressure I felt the pop that every fisherman hates, then the line went limp, and I watched as the fish of my dreams disappeared into the blue.

The trip had started like any other to Cortes Bank. Big boat, lots of divers and even more beer. It was a four-day trip, and we planned to hit all of the outer banks off Southern California, and possibly an island or two on the way back. The main targets were yellowtail and small bluefin tuna, this was a time before we had monster bluefin making the run to California water every year.

Our first day in the water was very productive with dozens of yellowtail ending up on deck. By the time day two rolled around it was time to get selective. I wasn’t planning on pulling the trigger on anything less than 40 pounds and was really hoping to break the 50-pound mark for the first time.

Cortes was not producing as well that morning, so we moved to Tanner Bank hoping to find a bigger grade of fish. As soon as we got in the water, I swam up current looking for bait. In just a few minutes I stumbled onto a ball of mackerel and let myself float along with it, watching a few bonito work the edges of the ball. Before long, my wait paid off as a slob mossback came rolling up to get in on the action.

As he came into the bait ball I took a quick breathe and dropped, leveling off at his height. In my excitement I broke the cardinal rule of hunting yellowtail, never swim right at the fish. Yellowtail are naturally very curious, and can usually be coaxed right in for an easy shot with a little patience. Unfortunately, my heart was racing a little too quickly, and I over anticipated how captivated he was by the pending meal in front of him.

As soon as he caught sight of me charging his direction, leveling my gun for a shot, he turned and peeled away from the bait ball. Rather than reset and hope for a second chance, I made a mistake. A mistake that started a series of mistakes that almost cost me the ultimate price.

As he veered away I took a shot I knew I shouldn’t take, a long shot at the fish’s tail.  Unfortunately for both of us my aim was better than my judgement and my shot landed, I now had the largest yellowtail of my life on the end of my line with a very poor holding shot. This is where I made my crucial mistake.

My shot must have clipped one of the last vertebrae in the spine, because the fish froze when the shaft hit home. Knowing the fish was likely only stunned, and not at all dead, I made a quick decision, dropped my gun and dove for the fish. I got there quickly confirming how poor my shot was and immediately wrapping the fish up in a bear hug. Arms around the tail, thighs squeezing the head, while I ankle kicked my way to the surface.

I made it to the surface and was just sliding my right hand down, searching for better purchase in the gills when the fish came back to life with a furry. If you’ve never bear hugged a very angry 50-pound fish before, I’ll tell you it can be a bit challenging. The real problem comes from the thrashing. When a fish struggles its main form of propulsion comes from its tail, so it slaps its tail, HARD. Fortunately for this fish I had just accessorized its tail with a brand-new weapon, otherwise it might have gone home with me that day.

Instead with the first big slap of the tail, I felt my own spear shaft sink into my chest. Despite a lot of mistakes and poor luck that day, I did have one stroke of good luck. When the shaft went into my chest, just below my right pectoral muscle, it hit one of my ribs and was deflected away from any vital organs. Seeing as we were 120 miles out to sea with only a basic first aid kit on the boat, that shaft not winding up between my ribs may have been the difference between life and death.

Though I was bummed I lost the fish, I couldn’t help but be grateful to come away from that experience mostly intact. I learned three valuable lessons the hard way that day; don’t take risky shots, never grab a hot fish, and keep sutures on the boat. The scar on my chest is a reminder of these every time I put on my wetsuit.

With the lack of sutures in our first-aid kit I spent the next two days with duct-tape wrapped around my chest while we continued to dive. Really is there anything duct-tape and a little whiskey can’t fix?