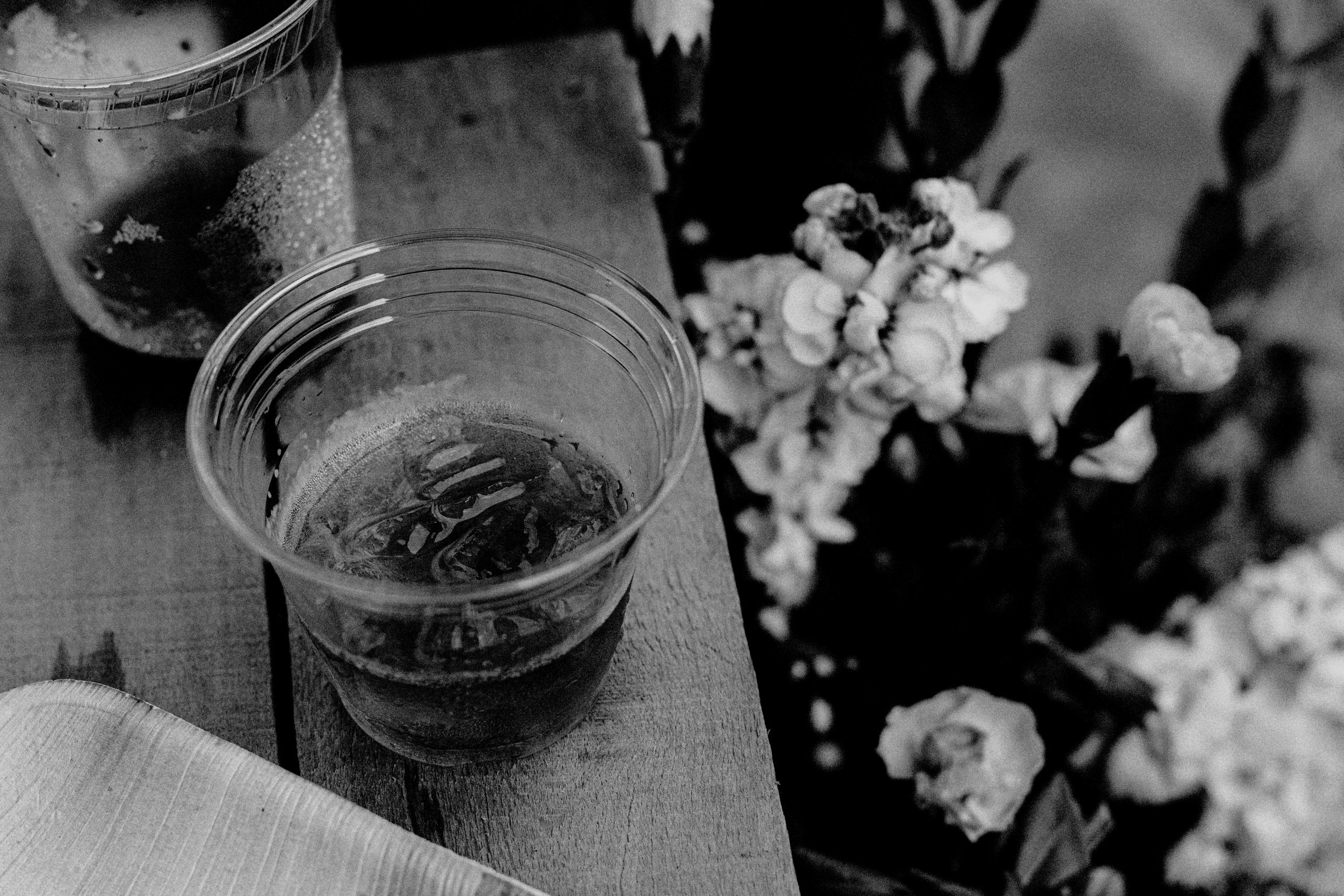 Some stories are just too good to ever make up, so Gospel True I tell you now, about Pappy, camellias and a jelly jar.  Pappy had this little possum smile, like he already knew the punch-line to a joke he had not yet heard.  He built docks and seawalls, running every river, blubbering up most every dead-end side creek from Charleston to Savannah.  But his favorite haunts were the lazy bends of the River May, lovingly wrapped around sleepy Bluffton, South Carolina, where he collected stories, camellias and very occasionally, other men’s wives.

At the end of the typical day, he’d pick his way up the unfinished gangway towards his truck when he’d get hailed from the porch, “Come on up, Roger, and have a drink!”

Little possum smile. “A slug of bourbon will do.” and when the bottle came out, he’d grin again, “Not much, now, just cover the ice.”

You can’t cover a single cube with a barrel of bourbon, he knew that, you know that and I do too. Once lubricated, the stories just rolled out of him.  He was utterly charming.

If a second was offered, it was accepted.  But when it came time for a third, he would graciously decline. “No, ma’am, but I will take a cutting off that camellia over there.”

Back home, I was a busy boy set to chores.  Folgers three-pound coffee cans, bottoms ventilated with triangle holes from an old-time beer opener, a “church key” we called it, coffee cans full of white builder’s sand.  Pappy came home with the cuttings, trailing a fine vapor of bourbon along the river breeze.  He laid loving hands upon each sprig and they prospered in those coffee cans in raised beds beneath a canopy of Spanish moss.  By the time I was grown and gone, there was a head-high quarter-acre jungle, a riot of color every winter when nothing else would bloom.  Pappy died at ninety-three and he squinted off into Eternity and gasped his final words, “I can’t see to get across.”

But he was a damn fine riverman, so I know he found safe passage.

The camellia, officially Camellia japonica, is a native of the Far East and came to America by way of the tea trade in 1797.  Hundreds of cultivars and a half-dozen scientific names later, Pappy called the ancient specimens Old Time Japonicas though I doubt he ever heard the scientific name.

Miss Agnes Simmons had a shanty way up on the north end of Daufuskie Island, alongside the road to the Haig Point lighthouse, first lit in 1873.  When she passed, she left pecan and fig trees, a carpet of paper-whites and daffodils, a couple of scraggly azaleas, a tumbledown arbor of Muscadine grapes and a monumental old-time Japonica.  No longer a shrub, it was now a tree, nearly twenty-five feet, half pink, half white.  It had been planted in an iron pot but somehow grew through the bottom.  I babied that camelia though I had no rights to it, cut back the Muscadine vines threatening to strangle it, fertilized it faithfully every Spring for twenty-odd years as Agnes’ sodden cabin slowly but steadily sunk into the earth while her camellia and my imagination ran wild.

But maybe it wasn’t my imagination.  That camellia was old by its size and two colors meant a graft, which likely exceeded Miss Agnes’ expertise.  The iron pot meant a transplant.  A two-hundred-year-old Japonica from an overrun plantation formal garden, rescued from the woods by Miss Agnes about 1920?  Seemed a reasonable assumption.

I took a cutting, tried to replicate Pappy’s magic, but, alas, it did not go well.  Squirrels unended the pot, snatched out the cutting.  And once I got that fixed, the spider mites set in.  I made a tea of cigarette butts and sprayed the leaves.  I hand washed each leaf with dishwashing soap.  Nothing worked.  I had given it up for dead when it budded in mid-March and popped a single exquisite variegated pink and white blossom.  I picked it with a few remaining leaves, put in a jelly jar on my kitchen table.  I knew it would never make another.

But meanwhile, Miss Agnes’ heirs sold the place to a long-legged beauty who loved her horses and her whiskey too.  I walked her around the yard with my Japonica tutorial. I gave her a pruning saw and my fertilizer.  She had a jug in her pickup and she offered me a drink.  We mixed it on the tailgate.  “Just cover the ice,” I said.

One drink led to another as they most always do but when it came time for a third, I said, “No thank you, ma’am, but I will take another cutting from that camellia.”

And I shot her my best little possum grin.