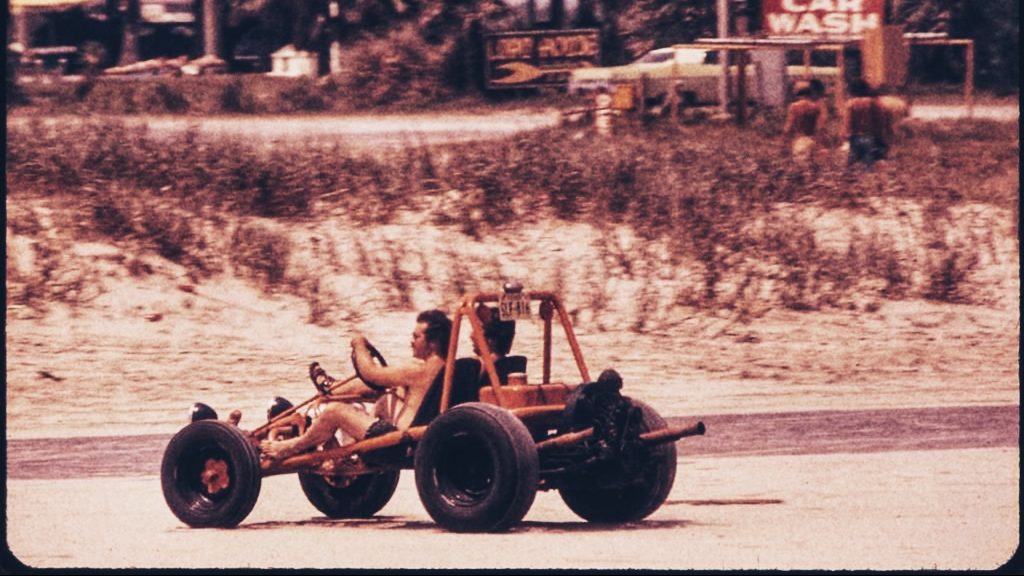 There was a time when California was the shit.

In the 1960s The Beach Boys ruled the airways. Surfing was the cool new sport as a restless generation of baby boomers exploded onto the scene challenging old assumptions. For the first time, there was such a thing as a teenager.

One area that saw huge change was the automobile. The big land yachts of the 50s were out, new smaller VW Beetles were in. They were a breath of fresh air, inspiring a new generation of creators who cut their teeth on hotrod culture. Think Rebel Without a Cause but with a tan.

Engineer, artist, and boat builder Bruce Meyers was one such designer. Meyers took the Bug, applied his crazy imagination, and created the era’s iconic off road racer, the Meyers Manx.

With the Manx the dune buggy kit car was officially born. “Old Red,” the original prototype, had a fiberglass monocoque body and a Chevy pickup suspension. The entire rig was powered by the four cylinder air-cooled powertrain from the summer of love VW.

When Ferdinand Porsche designed the original Beetle at the behest of Hitler, he inadvertently laid the groundwork for the Buggy. The idea was to create a reliable and affordable vehicle that could hit 60 miles per hour on the newly constructed autobahn. The civilian Beetle had a military sibling, known to the Nazi’s as the Type 82 Kübelwagen and to most of us as “The Thing,” which has a striking resemblance to the Manx.

Hippies are never the best at history.

Old Red proved the concept’s off-road prowess in Baja Mexico, covering the thousand miles from Tijuana to La Paz in a record setting 39 hours and 56 minutes. No one believed it was possible except on a motorcycle. This mad dash evolved into what we know today as the Baja 1000, the toughest off road race in North America.

The run of B.F. Meyers & Co was short and sweet from 1964 to 1971. Because of the expense and difficulty of the original kit, only a dozen Old Red versions were sold. Eventually Meyers ditched the Chevy suspension by creating a body that fit snugly over a stock VW frame.

Instantly the projects became accessible to hobbyists around the country. Like a boat, the stylish curves provided much needed structural stiffness while the arched fenders provided space for off road tires. The cat-like pose inspired the name, the Manx, from a similarly compact cat breed.

The Manx reached its pinnacle of pop culture relevance in Steve Mcqueen’s Thomas Crown Affair. McQueen takes actress Faye Dunway on a balls-to-the-wall joy ride through the dunes of coastal Massachusetts. The scene exists in the 1968 film only for the purpose of showing what a badass Thomas Crown is. I, for one, was sold.

In 1970 a controversial legal decision changed everything. A judge ruled that the Manx design was not copyrightable. Quickly the market was flooded with cheaper imitations. Despite attempts to make models for specialty groups like resorts and lifeguards, B.F. Meyers & Co.  went belly up.

While only 6,000 original kit cars were produced, they inspired an entire generation of off road racers. Tubular steel framed versions used giant Corvette motors in place of the compact VW power plants. These became the dune buggy category in the hardcore modern Baja race.

In 2000, Meyers Manx Inc. was reborn. The company launched a high-end, optimized version of Meyers’ original design, still based on the VW Beetle.

For 2023, the company released the Manx 2.0, an electric version with a 300 mile range. This will fit in a bit better around green-washed Hollywood than the growling classic version. While the company has not set official prices, they say the EV is targeted at the wealthy with multiple homes and cars, so you get the idea.

For me the original Meyers Manx is the epitome of the California dream. The marriage of hotrod and surf culture, the Manx shows what can happen when engineering and artistic talent merge in a rebellious spirit.