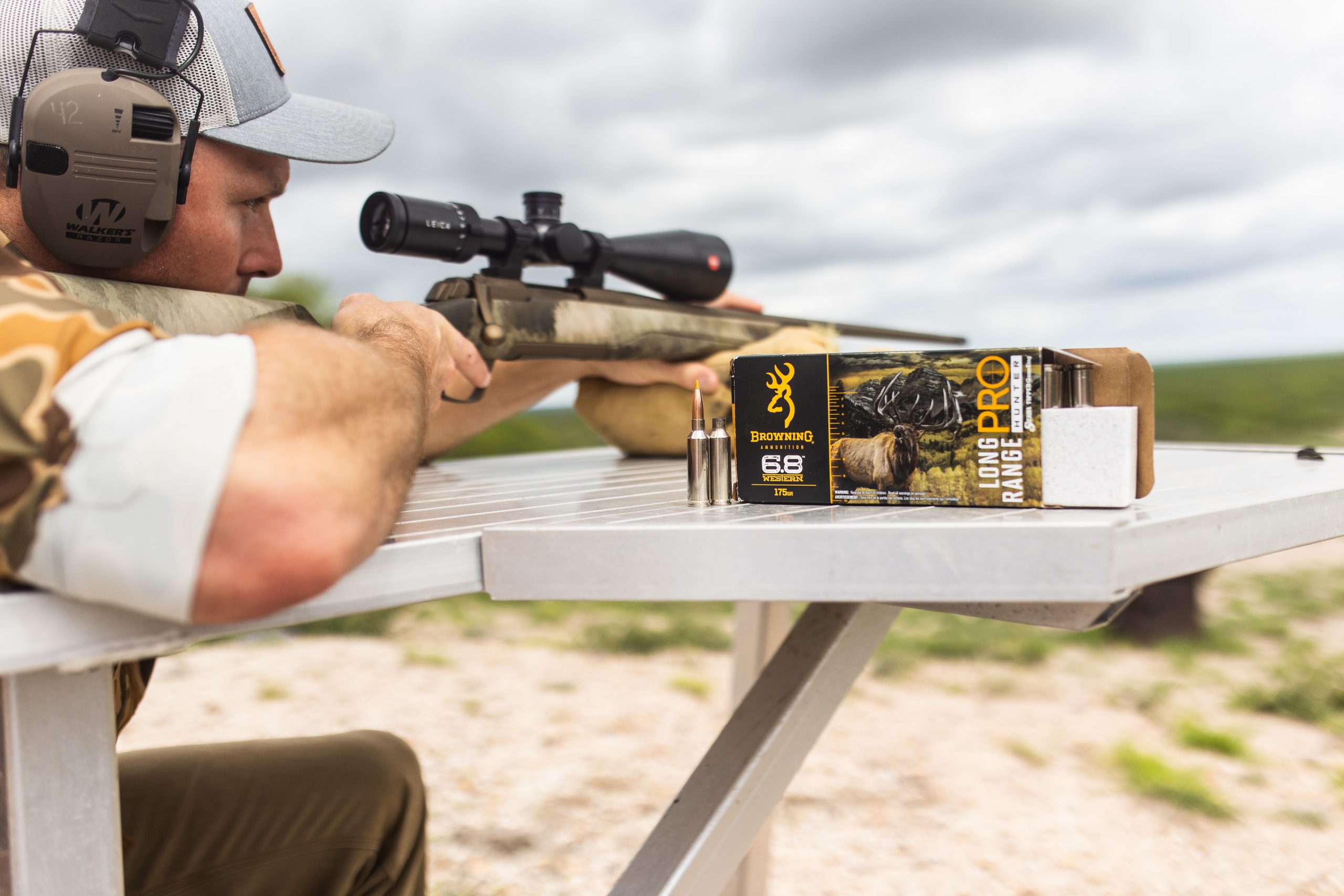 When Browning announced their new 6.8 Western cartridge, I rolled my eyes and made a few sarcastic comments on our Instagram Sunday Q & A about it just being another fast .270. Then Rafe Nielsen at Browning basically said, “Stop talking shit about it if you aren’t at least going to try it for yourself.” He was joking, but he made a good point. I asked Rafe to send one in for Field Ethos CFO, Colin Jones.

Colin was once clocked running 22 mph when he was playing in Denver against the Broncos. He’s fast as hell, and he loves fast-shooting Western cartridges.

When the Browning X-Bolt Hell’s Canyon made it to the office, I mounted the new Leica Amplus 6 to the rifle in a set of Talley Lightweight Rings. It sat in the office safe for a few weeks until this Monday when Colin and I met up to spend a few days checking out a ranch near Laredo, Texas.

We bore sighted the rifle from the porch at the South Texas ranch the old-fashioned way – by removing the bolt and looking down the barrel. It took about 30 seconds to do, and the rifle was only 3” off center at 100 yards when Colin took his first shot. After taking two more shots, the rifle was zeroed.

Colin let the barrel cool down and then shot a 1/2” group. Curiosity got the better of me so I let the barrel cool and shot an almost identical small group. From boresight to shooting groups to strapping the rifle to the top-drive for an afternoon hunt, everything took less than 15 minutes. We were that confident in the setup.

Two hours later, Colin shot a javelina behind the shoulder with the Browning. The 175 gr bullet went in a little low behind the shoulder and all the internal organs in the vicinity were completely destroyed and some of them exited the animal with the bullet. The whole scene was very hard-core…which is a good thing. Hard-core killing performance means an animal doesn’t suffer, and it means we’re not going to show the photos.

I now regret talking shit about the 6.8 Western, and I deeply regret telling Colin he could have the rifle. The javelina probably regrets a few things too.

I’m not afraid to admit when I’m wrong. Hell, I do it at home all the time -even when I’m not wrong. Yes, the 6.8 Western shares similarities with a few other cartridges, but Browning seems to have found the sweet spot in the .277 world. Speed, weight, twist rate, case length and pressure all seem to be jiving to produce a very inherently accurate long range killer. You’ll probably see Colin using this one quite a bit. We’ll confirm actual bullet speed on the doppler and stretch this thing out soon.

Absolutely. Browning will not be getting this one back from Colin.

This scope is a win by Leica. It has an illuminated #4 reticle -which is our favorite in a scope of this type. The turrets are easy to set up, and the low light performance is very good. No downside here.