Wojtek: The Bear of War 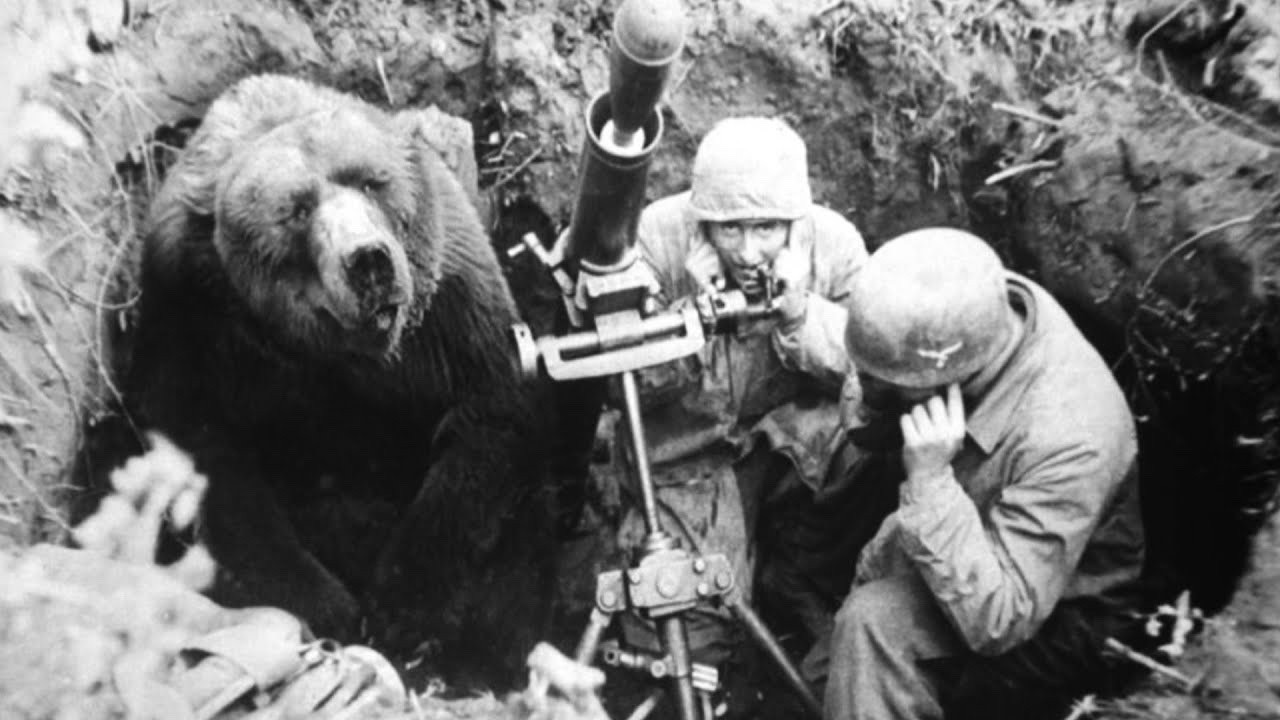 How is it that we live in a world where most people don’t know about Wojtek, the cigarette smoking, Nazi-killin’ bear of World War II? Thankfully, a movie is being made about Wojtek and his exploits that will correct this blaring oversight.

Wojtek’s story began in 1942 when the newly formed Anders’ Army left the Soviet Union with thousands of Polish citizens who had been deported to Iran. On April 8, they reached a railroad station in Hamadan, Iran, to find a young boy trying to sell a bear cub he’d found.

Apparently, things like that used to happen in Iran.

Eighteen-year-old civilian refugee and great-niece of Generał Bolesław Wieniawa-Długoszowski, Irena (Inka) Bokiewicz fell in love with the cub and convinced Lieutenant Anatol Tarnowiecki to purchase the bear. He did, and the bear spent the next three months in Irena’s care in a Polish refugee camp established near Tehran. Eventually, Irene gave the bear to the 2nd Transport Company (which later became the 22nd Artillery Supply Company).  The soldiers in company named the bear Wojtek, which is Polish for “smiling warrior” or “he who enjoys war.”

Damn fine name for a bear if you asked me!

What wasn’t damn fine was that Wojtek had problems swallowing so he was initially fed condescended milk from an old vodka bottle. In time the bear outgrew his swallowing issues and came to enjoy eating fruit, honey, syrup, marmalade, beer, and coffee. Wojtek also took up smoking cigarettes and sometimes even eating them.

Wojtek was taught to salute, slept with soldiers on cold nights, and soon became the company’s official mascot. This distinction would later become an issue when the company was assigned to fight alongside the British Eighth Army in the Italian campaign: According to British regulations, mascots and pets were not allowed to travel on British ships. To get around this obvious case of bear discrimination, Wojtek was officially drafted into the Polish Army as a private and listed among the soldiers of the 22nd Artillery Supply Company.

As Wojtek was now an enlisted soldier, he was given his own paybook and serial number was officially allowed to bunk with the men in tents and earned his keep by acting as a soldier as well.

During the Battle of Monte Cassino, Wojtek lugged 100-pound crates of artillery shells to supply the gunners. This actually came about when Wojtek saw other soldiers doing such and mimicked their actions. The newspaper Der Spiegel wrote of this odd sight in 2012. It stated, “A British veteran recounted how he was taken aback when he suddenly saw a full-grown bear calmly carrying mortar shells past him during the bloody Battle of Monte Cassino, in the spring of 1944.”

Wojtek did so well in his duties in Monte Cassino that he was promoted to corporal. A depiction of him handling an artillery shell was adopted as the official emblem of the 22nd Company.

In 1945, when World War II came to an end, Wojtek and the rest of 22nd Company were transported to Berwickshire, Scotland, where they were stationed at Winfield Airfield on Sunwick Farm, near the village of Hutton, Scottish Borders. Wojtek was popular with the locals there and was even made an honorary member of the Polish-Scottish Association.

But with demobilization came a new home for Wojtek; he was given to Edinburgh Zoo on November 15, 1947, where he spent the rest of his life. However, Wojtek remained a celebrity and was frequently visited by journalists and by former Polish soldiers from his old company. Many of the latter tossed Wojtek cigarettes to eat.

Why wouldn’t the zoo let Wojtek actually smoke his smokes? After all, he was a war hero for Christ’s sake!

In the fall of 2021, it was announced that the animated movie A Bear Named Wojtek is slated for release in 2022.