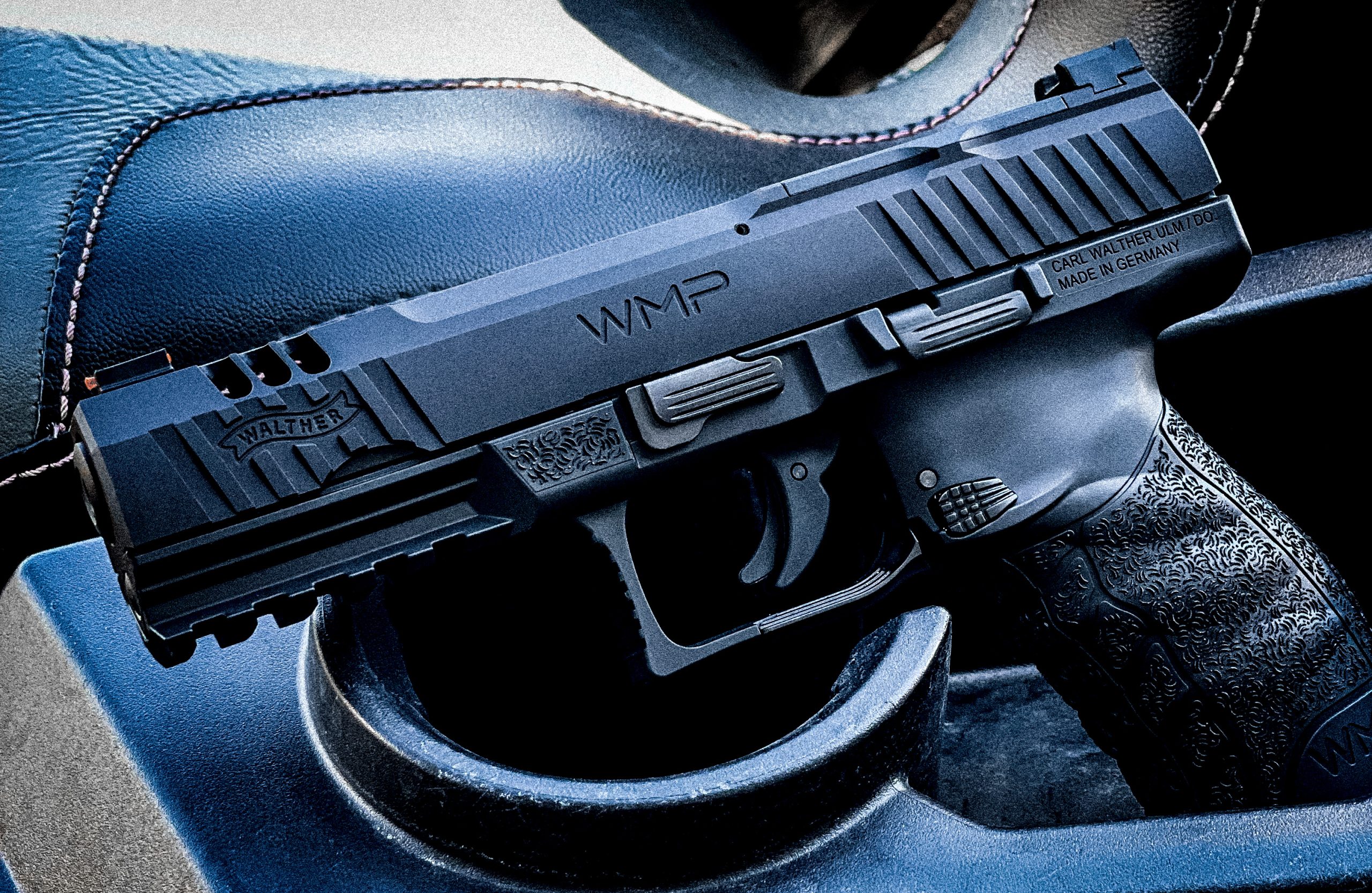 A Review by By Mike Schoby

While unboxing Walther’s newest offering my wife walked by and asked, “Is that a PDP?” (I know that sounds strange, but she is a bit of a gun nerd herself).

“What would anyone use that for?”

“Good question … chalk it up to German engineers finding solutions to problems that don’t exist,” I replied.

While I may not have a need for it, it is still my job to review it.

My first impressions: Nice feeling, ergonomic grip that fits my medium to large hands perfectly. Good iron sights with an easy-to-see fiber-optic front. The slide, like nearly everything today, is optics ready—and on this gun that could be very beneficial. The slide is also cut with interesting slots near the muzzle, which reduce slide weight to increase blowback reliability. The barrel is a rather heavy 4.5-incher, which I assumed featured hammer forged rifling but was surprised to learn is button rifled. The WMP also sports a unique firing mechanism that Walther describes as “hammer-fired, pre-cocked, double action.”

Unboxing impressions over, it was now time for range work. I have a large selection of .22 mag ammo on hand so I grabbed the first box on the shelf, Winchester Supreme 34-grain JHPs. I loaded up the 15-round magazine (yes, you read correctly) and went out the backdoor to my makeshift range. Dropping the slide, it jammed the first round right into the feed ramp.  I racked the slide and let it slam home again—the next one jammed on the feed ramp as well.  If you are not smart (like me), you will do this three or four more times before dropping the mag, stripping out the remaining cartridges and getting different ammo.

As an aside, a really unique feature about the WMP is the magazine release; it is the only “four way” magazine release I am aware of.  Push button releases are on both sides, as well as ambidextrous paddles (a la H&K style) mounted on either side of the trigger guard. No matter how you like to drop a magazine you will be pleased … I’m actually surprised the white lab coat geeks didn’t figure out a way to also incorporate a eurotrash heel mag release as well.

I grabbed a few boxes of Federal 22 WMR (Classic 40-grain FMJ and Premium Maxi-Mag 40-grain hollow points). The WMP ran through this selection like a raped ape; not a hiccup in 250 rounds. I should have just shot Federal from the get go then I could report no failures of any kind, but with any new gun it is imperative to run several varieties of ammo through it to see what it prefers (or just stick with Federal if you don’t like problems).

I didn’t formally accuracy test the WMP on paper, but I was shooting World of Targets Double Mag steel spinners. The 4.5-inch disk wasn’t even a challenge to hit at ranges out to 25 yards and the .22 mag is much more impressive than shooting long rifles at the same steel target.

At the end of the day, this gun is simply fun to shoot.  It’s a bit blasty like all .22 mag pistols are because it is a high-pressure round, but the WMP is super controllable, and plenty accurate.

As to the original question: What is the Walther WMP good for?

After testing, my answer is: Nothing …and everything. It is not ideal for self-defense, but with a tad less than 300-foot pounds of energy and loaded with Federal’s new Punch ammo it would ruin a bad guy’s day for sure. It is not as cheap to plink with as a .22LR, but it isn’t prohibitively expensive either. Possibly it is best suited for farm chores where you may need to shoot a predator, a person, or a pop can.

Field Ethos’ Editor-In-Chief, Jeff Johnston, has kept an AMT Automag in his farm golf cart for years for just this purpose. Aside from the fact the gun itself is an unreliable piece of shit, the cartridge is not. It has accounted for all sorts of small game, rattlesnakes, and even hogs. And that is where the little Walther shines. It is a jack-of-all-trades gun. It is a gun to keep in the pickup or side-by-side. It will work for self-defense. It’s fun to plink with, and if you had to grab a gun and go, throwing 500 .22 rounds into your backpack is a lot lighter than 9mm or 45.

Pro: Finally, a high-quality, high-capacity, reliable 22 magnum—save your AMT for the next liberal gun buyback scheme.

Con: Wish the muzzle was threaded for a can