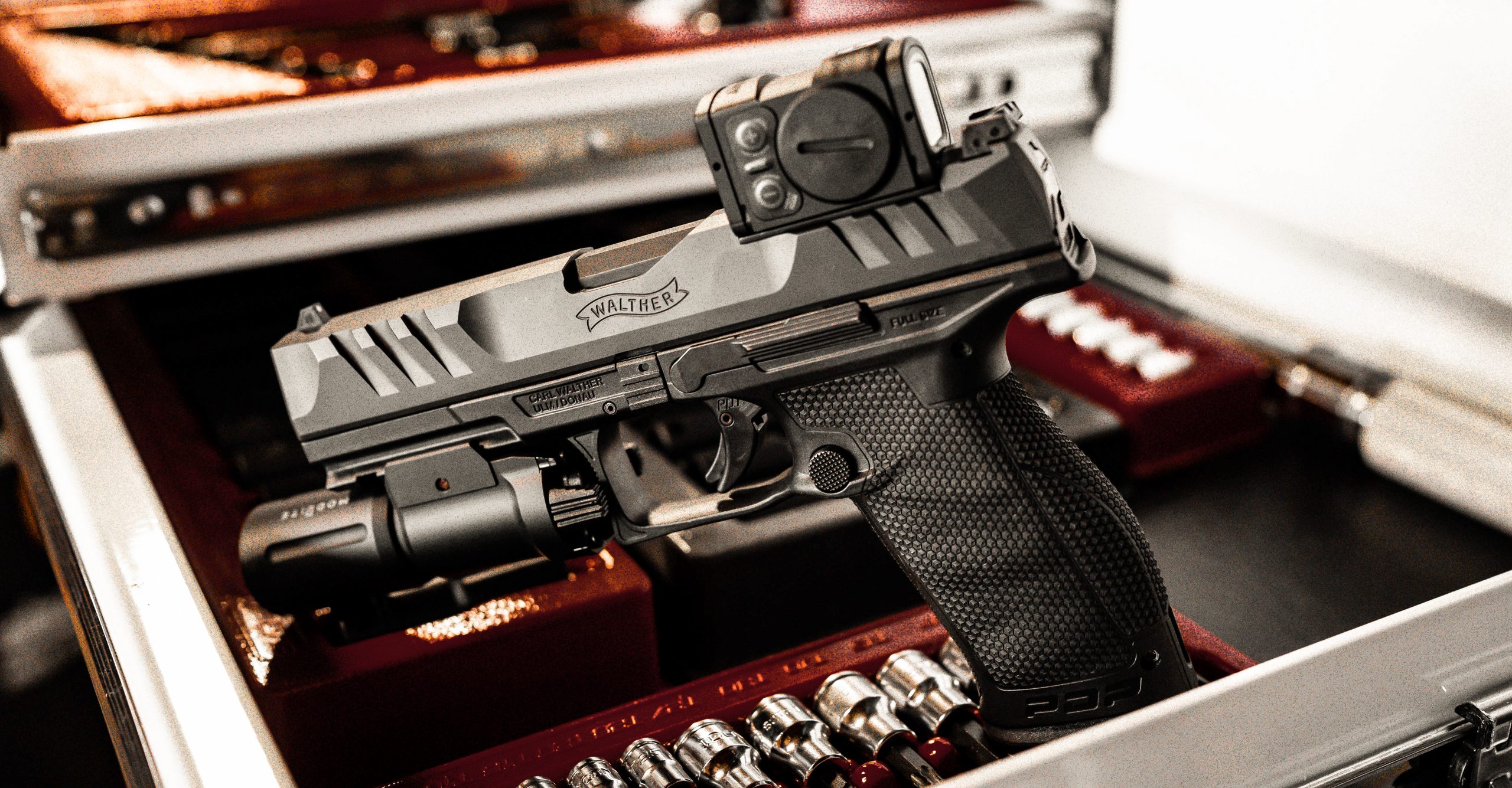 –A Review by Jeff Johnston

If James Bond were going to combat rather than happy hour I’d bet he’d ditch his PPK for Walther’s new PDP. That’s because it’s a big-ass, 18-round striker-fired fighting pistol that’s the next best thing if you can’t get to a rifle. Almost as notable as the new gun itself, however, is the timing at which Walther decided to develop it. Let me explain.

Not long ago a marketing rep from Kimber called me and asked if I’d sign a non-disclosure agreement so he could tell me about the company’s “unbelievable new gun.” I’ll save you the anticipation and just tell you that the “top-secret new and unbelievable gun” was Kimber’s version of a polymer subcompact doublestack. You know, just like Sig’s P365, Ruger’s Max-9, Taurus’ GX4, Glock’s 48, Springfield’s Hellcat, S&W’s M&P Plus and a shitpot more. Glad you kept that daring bandwagon-hop a secret, Kimber. Good job.

So while all the majors were busy fighting for scraps of the EDC market, Walther, the 136-year-old German firm and the original maker of the perfect EDC gun—the silky PPK–went in another direction when it created perhaps the ideal duty/OWB/one-you-grab-if-all-hell-is-breaking-loose handgun. It’s called the Personal Defense Pistol, or PDP. I’ve been shooting it for a few months, and here’s what I can tell you.

In this world there are several truths, one of which is: With all else being equal, the larger the handgun, the easier it is to shoot. You aren’t going to conceal the PDP (the full-sized versions, anyway) unless you happen to be a rodeo clown, but that was never Walther’s intention.

Rather, this is the 18-round 9mm that’s hard to miss with it if your fundamentals are up to snuff. That’s right. Thanks to its 5-inch barrel’s long sight radius, best-in-class grip, best-in-class trigger, red-dot aiming, and precision German barrel and craftsmanship, it’s the gun that makes you remember how accurate handguns can be after you’ve grown used to shooting any of the aforementioned 3-inch barreled pocket rockets.

I supposed “best in class” needs some further clarification, so here goes. Walther engineers obviously spent a huge amount of thought on the actual feel of the grip. Micro polymer pyramids are molded into a slight palmswell grip that allow wonderful purchase even amid summer sweat, yet aren’t so spiky that they perform acupuncture on your hand.

The trigger is the model for all striker-fired, two-stage triggers at the moment. While the company lists it as having a 5-pound pull weight, mine averaged 4. It’s also very smooth and owns very little overtravel. If you’re used to a Glock, you’ll smile when you pull the PDP’s.  But if that isn’t good enough for you, Walther offers its drop in Dynamic Performance Trigger that measures around 3.5 lbs and is crisper than scorched bacon.

During accuracy testing I literally cut the center out of the paper bullseye at 10 yards like a carnival game; I cleared a plate rack nearly as fast as my competition gun, and I routinely hit a 10-inch steel plate at 100 yards from a rest with a red dot installed. In 500 shots, reliability proved 100 percent.

Is there anything I don’t like about it? Yea, polar opposite of the sexy PPK that pulls from a pocket like a silk handkerchief, the PDP is as blocky as a lego, and I’m not entirely sure why Walther made it that way, other than for looks. In my opinion it could have more beveled edges.

But as a duty gun, a dedicated home defender or a target special, this 18+1-round 9mm is just about perfect. I give Walther props for bucking the industry trend. And remember when I said that stuff about James Bond choosing the PDP? Well maybe … if Daniel Craig weren’t such a weak-wristed anti-gun sissy.