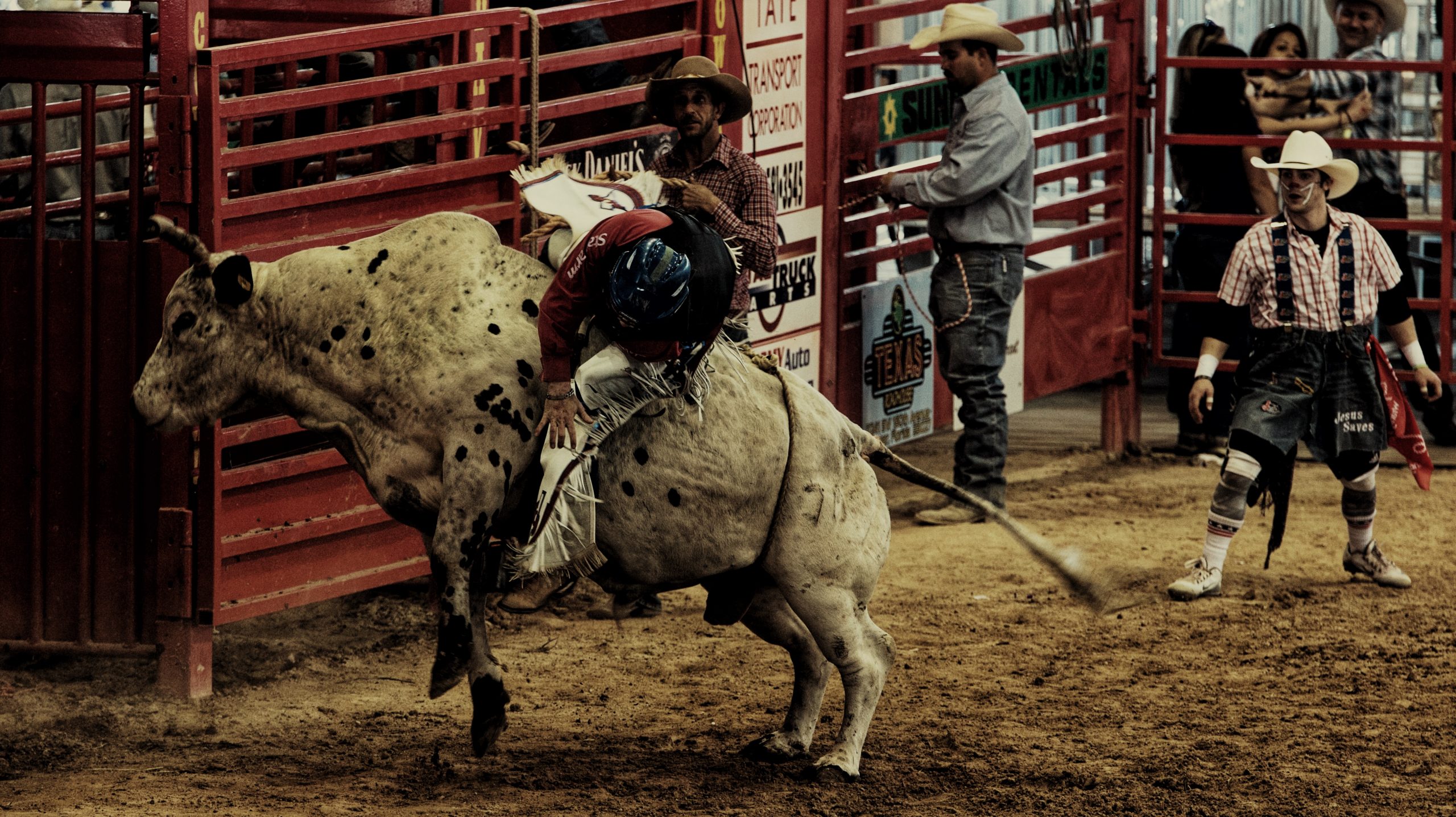 “Ain’t nothing dumber than a bull rider,” said my grandfather. A tough old West Texas man who’d flown 83 combat missions over Europe in a P-47 during WWII, he was nothing if not opinionated.

I’d grown up hearing cowboy stories from our family history in the Davis Mountains, and I had learned to ride, hunt and fish along the way. But by my generation we’d become pretty suburbanized, living inside Houston’s beltway. I never really “cowboyed,” though I had the jeans, belts and boots like most of my peers. And who hadn’t ridden a mechanical bull on a beer-fueled evening at Gilley’s or some other honky tonk?

Living in Austin for college at UT, I got drawn deeper and deeper into Texas’ origin story. So when the chance came up to try bull riding at a small charity rodeo put on by a campus service organization, I jumped at it. There may have been other events—I don’t recall—but in hindsight I’m still stunned that anyone thought putting a bunch of inebriated frat guys on bulls was a good idea.

Don’t get me wrong, these bulls were not in their prime as rodeo animals. Some were young and some old but all were still big animals. Having never ridden a real bull, I climbed up the side of the chute and got on the back of one. He shifted as I sat, while one of the rodeo hands showed me how to wrap the bull rope.

Now, a normal wrap is where you take the tail of the rope, and lay it across your hand, then go behind the hand, then back through your hand again. This results in the tail ending up on the outside of the pinky. My error was in taking the tail and putting it between the ring finger and the pinky finger, resulting in what I would later learn was called the suicide wrap.

The chute opened and the bull took off. I have no idea how much he was bucking and kicking, but at the time I just knew this wasn’t like any mechanical bull I’d been on. It probably was less than three or four spins before I launched off the bull’s back. This is where the wrap comes in.

Next thing I know I’m mostly laying in the arena with my right arm still attached to the rope, stretched up along the flank of a slightly less pissed off bull who’s now running more than bucking. As I was trying to open my hand to free the rope, the bull spun one last time and came down on my right quad with at least one hoof, pressing me down into the arena mud and jerking my hand free of the rope.

A rodeo clown helped me to my feet as I trotted over to the rail fence. It wasn’t till I sat on the fence and felt the cool breeze on the back of my leg that I realized my Wrangler jeans had been split as cleanly as with scissors from my butt cheek to knee. The hoof had cut through the skin, though not too badly, and the bruising that was beginning to form would be nasty for the next few weeks. I was shaken and scared—and sore.

Licking my wounds the following weekend, I shared the story with my grandfather. “Ain’t nothing dumber than a bull rider.” And then he said, “Well, what are you going to do about it?”

When the next year’s rodeo came back around, I knew I needed to get back up on a bull for no one else but myself. So, a little more knowledgeable and a lot more sober, I climbed back into the chute and rode another bull. I still didn’t make eight seconds before I got thrown, but I knew I could do it again if I wanted to.

I also knew that I didn’t need to anymore.