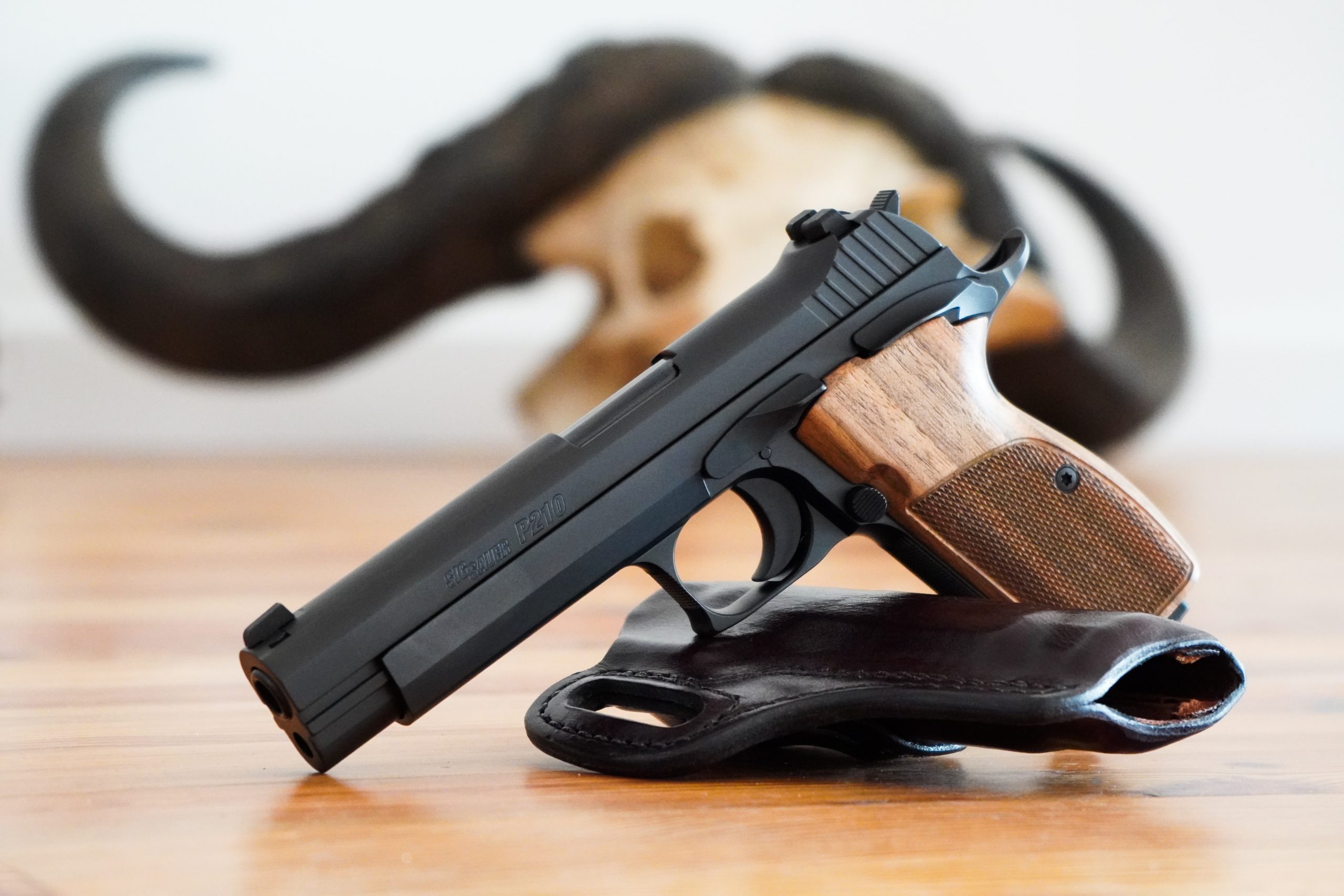 I’m not going to bore you with the history of the original Swiss-made P210, but do take note that it’s been in used by military, police patrol units, and tactical teams, as well as target shooters since 1949.

To those in the know, the Sig P210 is legendarily accurate. This accuracy comes from the design itself wherein the slide travels inside the frame rails. Without getting too nerdy, this aids in alignment so that everything locks up tight and produces precision shooting and reliability.

Now that the nerd stuff’s out of the way, let’s discuss the current production Sig Sauer P210 Standard…

When Sig offered to send Don and I each a P210, I opted for the standard while Don opted for the target model. His reasoning was that he could change his grips out and have a carry gun with target sights…which I’ll admit is pretty cool. I opted for the standard model as I really don’t put a huge priority on the sights of my carry guns so long as they’re relatively low profile and can do the job if you actually take the time to use them. All this is to say that the P210 Standard comes with duty sights that shouldn’t come with much of a snag concern.

If you’re reading this, odds are you’ve bought into the idea that high capacity in a carry gun is essential to your survival. I’d counter with saying this: it certainly doesn’t hurt, but capacity shouldn’t be your deciding factor in choosing a carry gun. Functionality should be, and while the P210 Standard has a magazine capacity of eight rounds, its ability to accurately deliver those rounds on target should leave you with four to five rounds left over in your primary magazine if you look at the average number of shots fired in a defensive situation. But don’t take this as me saying you’ll never need more than eight rounds to defend yourself…you’ll just need a mag change with this gun if you do. You can rest assured that the platform is as fully functional as a carry gun today as it was when European police and military forces holstered it in the 1940’s.

On the range, the P210 Standard will outshoot any duty-style gun I’ve ever used. Aside from the design’s inherent accuracy, the very light and clean breaking trigger really assists in putting the rounds into tiny little clusters. I’ve never measured group size from a pistol, and probably never will, but this gun will hang with most any 9mm dedicated target pistol out there…if wielded by a better shooter than myself. It’s certainly capable of better accuracy than I am.

The overall fit and finish of this gun is custom grade. The stainless-steel frame and slide are both coated in Sig’s Nitron finish, which is more than durable, and the checkered walnut grips look great while being old-school functional. I thought about changing them to G10 grips, but they just look too cool.

Without question. It’s become my favorite centerfire pistol. While it may be heavier than what I typically carry—due to the steel frame—the extra heft also makes for a much smoother shooting experience.