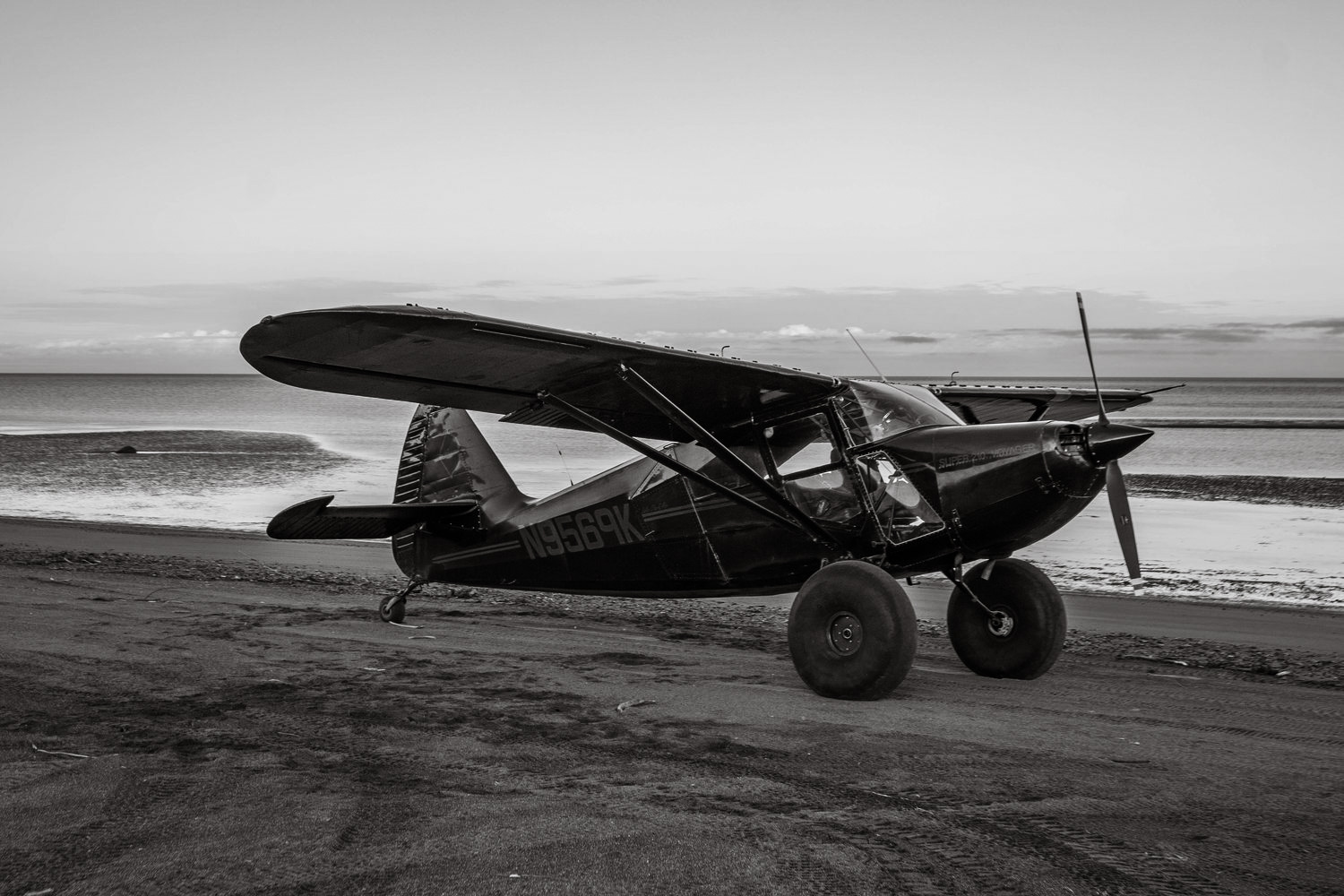 I made my first hunting trip to Alaska in 1986, hunting with legendary outfitter Terry Overly, the “Man in Black.” It was almost my last.

Overly lived his entire life in Chisana, an old mining town accessible only by airplane or, in winter, snowmachine or dogsled. Back in the day the hunting for Dall sheep, grizzly bears, moose, caribou, and wolves was something else. I’d been there three weeks, killed a big caribou bull and mountain grizzly, rode horses to Hell and back, climbed a lot of mountains and looked at a lot of sheep, and flew around with Overly in his trademark all-black, souped-up Piper Super Cub. Terry was as good a cub jockey as I ever flew with–and I’ve flown with lots. He learned to fly before he learned how to drive a car, for Christ’s sake! So, we had a few days left in the hunt, and at supper one night Terry told me he had flown over a small river drainage and found a small band of legal rams, and wanted to personally guide me.

I could not get my shit in that airplane fast enough!

You cannot legally hunt the same day you fly in Alaska, so late the next afternoon Overly landed us on a gravel bar at the mouth of the drainage, where we made a spartan camp. At the crack of 8–The Big O didn’t do mornings well–we were off, boulder-hopping up the creek. We found the sheep, I killed my first-ever Dall ram, it was getting late, and the conversation went like this.

“Bob, we can dick around, take a million pictures and whatever, but if we do we’re gonna have to sleep on that gravel bar again tonight. Or, we could hurry the hell up, haul ass back to the airplane, and I bet we’ll have just enough light left to fly back to the lodge, where we can party our asses off. What’ll it be?”

We hauled ass and loaded the airplane, Terry hit the gas, but just as he was going to lift off, he shut it down.

Good thing he did, because the left rudder cable was frayed through save for one strand of wire. Had he taken off and made the sharp left bank required to get us out of there, it surely would have snapped. And that would’ve been all she wrote.

So, next morning Terry did one of the most amazing MacGyvers I have ever seen.

My frame pack bag was held onto the frame by two three-foot long metal pins. Overly duct-taped those pins to the cable, looked at me and said, “Dude, I think it’ll hold long enough to get back to the lodge (about an hour’s flight). But if you don’t want to come, I’ll replace the cable, then come back for you.”

But being in a place where, if he wrecked and died, nobody would know where I was and I’d die anyway, I jumped in, he took off, and we made it back in one piece.

And partied our asses off.

Thirty years later Terry told me it was the closest he’d ever come to dying in a plane wreck. It was shit like this that made me move to Alaska in 1991 and stay for another 15 glorious years.