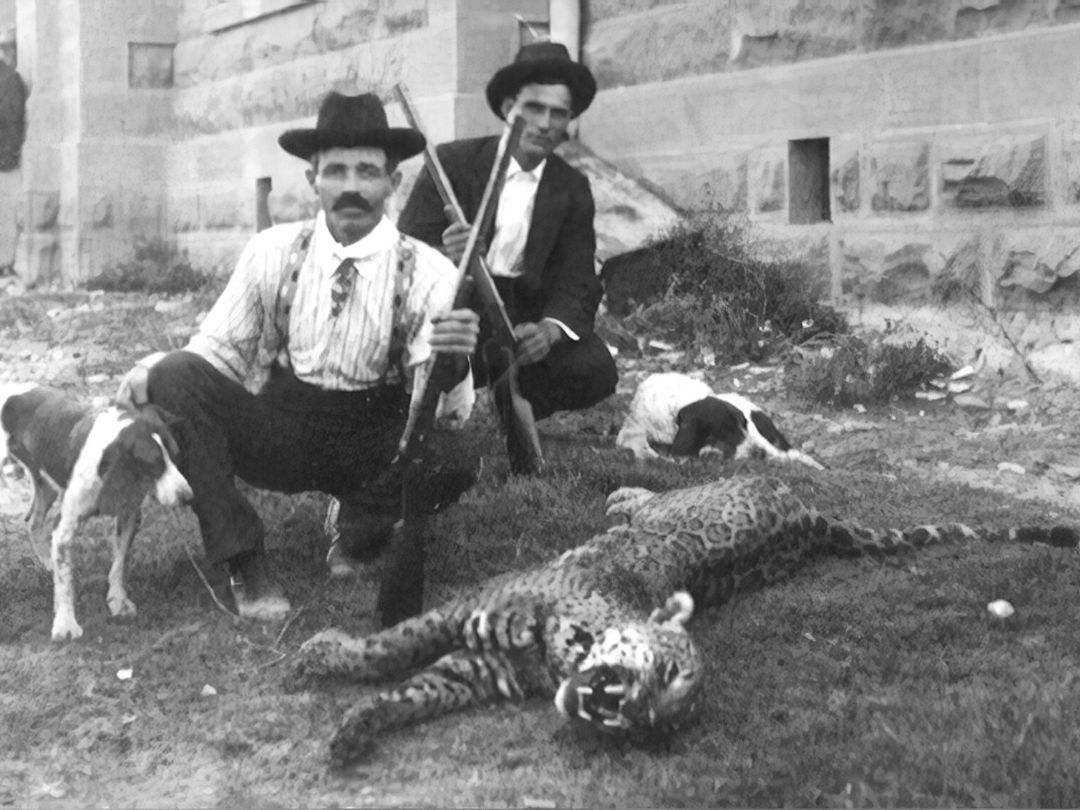 Each day’s end brought fear and a sense of unease to the small ranching community of Center City, Texas in the fall of 1903.  For weeks, haunting shrieks cut the night’s silence, awakening ranchers in the dead hours long before dawn.  Watchdogs barked incessantly either in warning or in fear at the unidentified noises and stock began disappearing almost nightly.  At first, only smaller animals such as sheep and goats turned up missing, but over time the animals that went missing were of a larger nature.  Even cows started to disappear.  Of the few animals remains that were found, ranchers agreed that they were all slain in the same manner and that whatever was doing the killing was extremely large and very strong.

One morning a few ranchers with their watchdogs in tow came upon a slain cow at the edge of some woods.  The dogs began barking feverishly at something unseen within the trees.  As the men rode the edge of the motte a dark shape flew from the ground, almost straight up into the trees, disappearing into the thick foliage.

By the time the story got around town, the unknown and still almost unseen animal had gotten bigger and bigger.  Exaggeration grew fear and people began to wonder aloud what had all but taken control of the night.  Most of the old-timers were convinced that it could only be a mountain lion.  But skeptics said that a mountain lion couldn’t be that large and not nearly that strong.

As the story circulated, another slaughtered animal was discovered by ranchers.  This time it was a huge longhorn.  Although some argued that it appeared the animal could have died from natural causes, most believed that it was killed by the same phantom that had been stalking the area for weeks.  Fueling that theory was the torn earth surrounding the fallen longhorn that, to some, indicated a violent struggle.  Although all involved were uncertain as to what they were dealing with, most agreed that it was time for action.

The call was put out for trail hounds and any man with a gun and courage enough to ride after the stock killer.  Hunters and their dogs from all over Mills County answered the call and it wasn’t long before the dogs picked up the scent.

Close to dusk on September 3, 1903 Henry Morris, Homer Brown, and John Walton were the first group to pick up the scent.  Their dogs trailed furiously, leading the men to the edge of a thick stand of Shin oaks.  The hunters peered into the curtain of underbrush for signs of the animal but could only make out a set of glowing eyes peering back at them.  At the dog’s charge the concealed beast let out a blood curdling scream causing the pack to turn and run from the woods.  The hunters frantically tried unsuccessfully to coax the dogs back into the thicket to corner the animal or possibly flush it out into the open.

As the dogs reentered the brush an immense paw suddenly latched onto Jack, Homer Brown’s Beagle Redbone Cross Hound, and pulled it from the rest of the pack.  In a violent blur the animal grabbed Jack in his jaws, crushed his skull, and flung his dead body aside.  Unfazed by the attack, the dogs continued all efforts to subdue the animal

Morris, deciding that they would need heavier ammunition and the help of others rode off leaving Brown, Walton, and the dogs to keep the animal at bay.  It didn’t take long for the others to arrive and see the commotion firsthand.

Dogs that got close to the edge of the thicket were swiped at.  Those that ventured too close were cut to ribbons and thrown aside by the still totally unseen animal.  The night air was filled with the screams of dogs and the rapid volley of gunshots in haste or in fear.

Suddenly, and without warning, the cornered animal bolted from its surroundings.  Hunters saw a blur of motion with the remaining dogs giving chase.  The pack ran the animal up a small Spanish oak in the middle of another thicket.  Brown rode within shooting range and fired his shotgun at the huge animal hitting it in the hip.  The beast fell to the ground and the remaining pack swarmed on top of it.  The dogs’ barks immediately changed to screams and yelps as the pile of writhing animals exploded.  Dogs were slashed open and thrown, some a distance of twenty feet or more to their death.  Then, just as suddenly as it had before, the ferocious beast broke free from the few remaining dogs and ran into thicker cover.

Old Red, one of Claude Eacott’s dogs, badly ripped open across his shoulders and one of the few dogs left alive, hobbled after the beast.  The hunters chased after the animal until it was cornered once more. The only thing separating the men from the beast was one or two dogs and a few small bushes.  One of the hunters decided that he would charge the animal and finish him off.  He dug his spurs into his horse’s sides and charged forward.

As the mounted horse jumped the small bush, the beast on the other side sprung forward to meet the challenge.  The animal caught the horse in the hindquarters, immediately sinking its teeth and claws into the meat of the leg.  The horse collapsed with the rider atop him screaming, “Don’t shoot…you might hit me or the horse!”

Eacott, fearing for the trapped hunter’s life, dug his spurs into his own horse, charging into the violent exchange.  The animal turned loose of the first horse and lunged at Eacott, coming within inches of his head.  As the beast hit the ground, Eacott turned and fired another shotgun blast into the animal that ran free from the commotion before collapsing.

The hunters collected the beast and took him back to town for all to see.  It wasn’t until they were back in Center City that the animal was identified as a jaguar.  The huge male weighed 152 pounds and had a foreleg that was twenty-one inches around. The cat had killed countless stock animals and on the night of the hunt, killed eight dogs and wounded numerous others. Before being mounted and displayed in a museum in Austin, the jaguar was scored by the Boone and Crockett Club who, to this day, still lists the animal as one of the largest taken in North America.