Charlie Ren and Jack O’Connor in 1935, both badly sunburned, with hard-won desert bighorns. Ren is probably holding his Savage 1899 in .25-35, famously described as “all the gun I need.” O’Connor’s rifle is almost certainly his Sukalle 7x57 on a ’98 Mauser action. 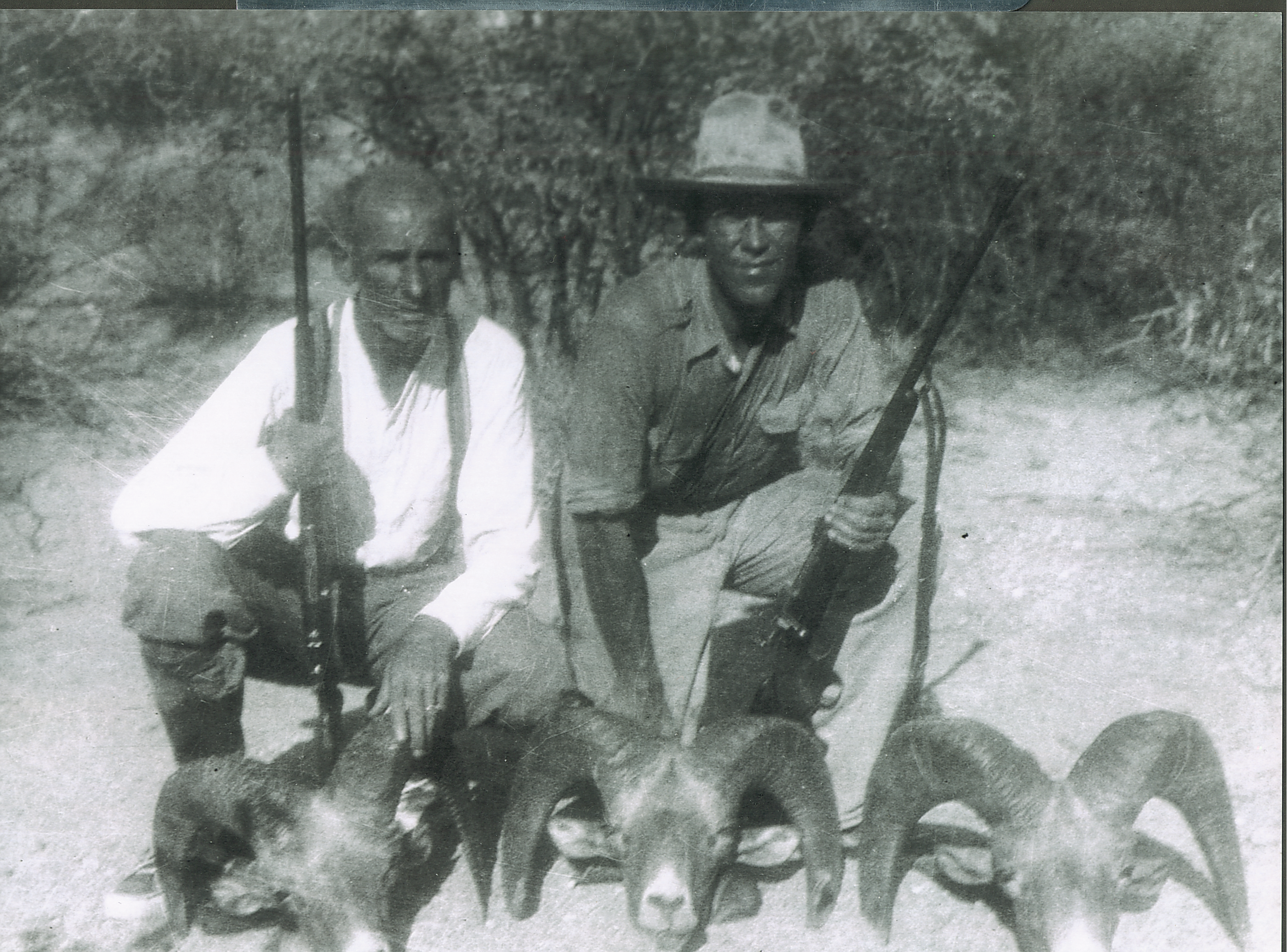 The simple tombstone in St. Francis Cemetery in Phoenix reads: “Charles C. Ren 1884 – 1942.” Centered above the name is inscribed “Father.” Centered between the dates is a Christian cross.

If you’ve read your Jack O’Connor—and your Grancel Fitz, Frank Hibben, and Elmer Keith—you will know that they, and many others, hunted in the Sonoran Desert with Charlie Ren in the 20s and 30s. My uncle, Art Popham, hunted desert bighorn with Ren—and O’Connor—in August 1935. In 1937, Elmer Keith accompanied Dr. Wilson DuComb on a sheep hunt with Ren out of his hunting lodge in Sonoyta, Sonora, locally called “Old Hotel Dorado.” Keith’s account of their hunt is in his autobiography “Hell, I Was There.” (Elmer, being Elmer, spelled the name “Wren.”)

In various writings, Ren has been referred to as a “mysterious desert rat.” Growing up with my uncle’s tales of that grueling midsummer hunt in blistering heat, I’d long wondered what happened to Ren.

Charles Claude Ren died in hospital in Tucson, of tuberculosis, on May 5, 1942. He lived in Ajo, AZ, where he owned a car dealership (Ren Nash Motors). From the mid-1920s until his death, he operated a successful outfitting business out of Ajo and, later, from the Sonoyta lodge. In his day, he probably knew more about desert sheep in Sonora than anyone alive, and was the go-to guy for hunters who wished to pursue them. Here, I must point out that times were different. Mexico was just a decade past a long and bitter revolution. Desert sheep were officially protected, but with disagreement over federal, state, and local authority. Can we just say that hunting them was a little bit gray?

Straightforward (and risky) enough, but it turns out that Charlie Ren was more mysterious than his admiring hunters ever knew.

A great-grand-daughter of his did painstaking research, including DNA, partly solving a century-old family mystery. According to her, Ren was born in Walla Walla, WA on September 6, 1879 as Victor “Claude” Sherwood. In 1905 Victor Claude Sherwood married Georgia Amilla Lang in Idaho. They had two sons, farmed in Washington and Idaho until divorced in 1914 … and then Claude Sherwood exited planet Earth.

No record of Victor “Claude” Sherwood has come to light between mid-1914 and 1916. He and his brother Ross went on a long trip; Canada was rumored, actual destination unknown. What is known: Only the brother returned, saying Claude had been killed, shot in the back while hopping a train in Colorado. Prior to departing, Claude Sherwood told his father he would never see him again, and he did not.

For decades, the Sherwood family presumed Claude was dead. Turns out, he pitched up in Arizona in late 1916, changing his name, and also his birth year–from 1879 to 1884! In May, 1917, Charles Claude Ren married Lucreta “Luz” Soto in Pima, AZ. They lived in Ajo, had three children, and Ren worked at the Ajo copper mine as well as starting both the Nash dealership and outfitting business. By 1937, the year of the DuComb-Keith hunt, Ren was spending most of his time at the Sonoyta hunting lodge and was with Dolores Nunez Canez. They also had three children, the last born after Ren’s passing.

Oh, there’s more, including a massive diamond ring that Claude Sherwood wore when he vanished. His brother—who also changed his name—was wearing the ring when he returned. But little else is known. Charlie Ren’s name survives as a nearly-lost hunting legend … shadowed by a greater mystery that is unlikely to ever come to light.