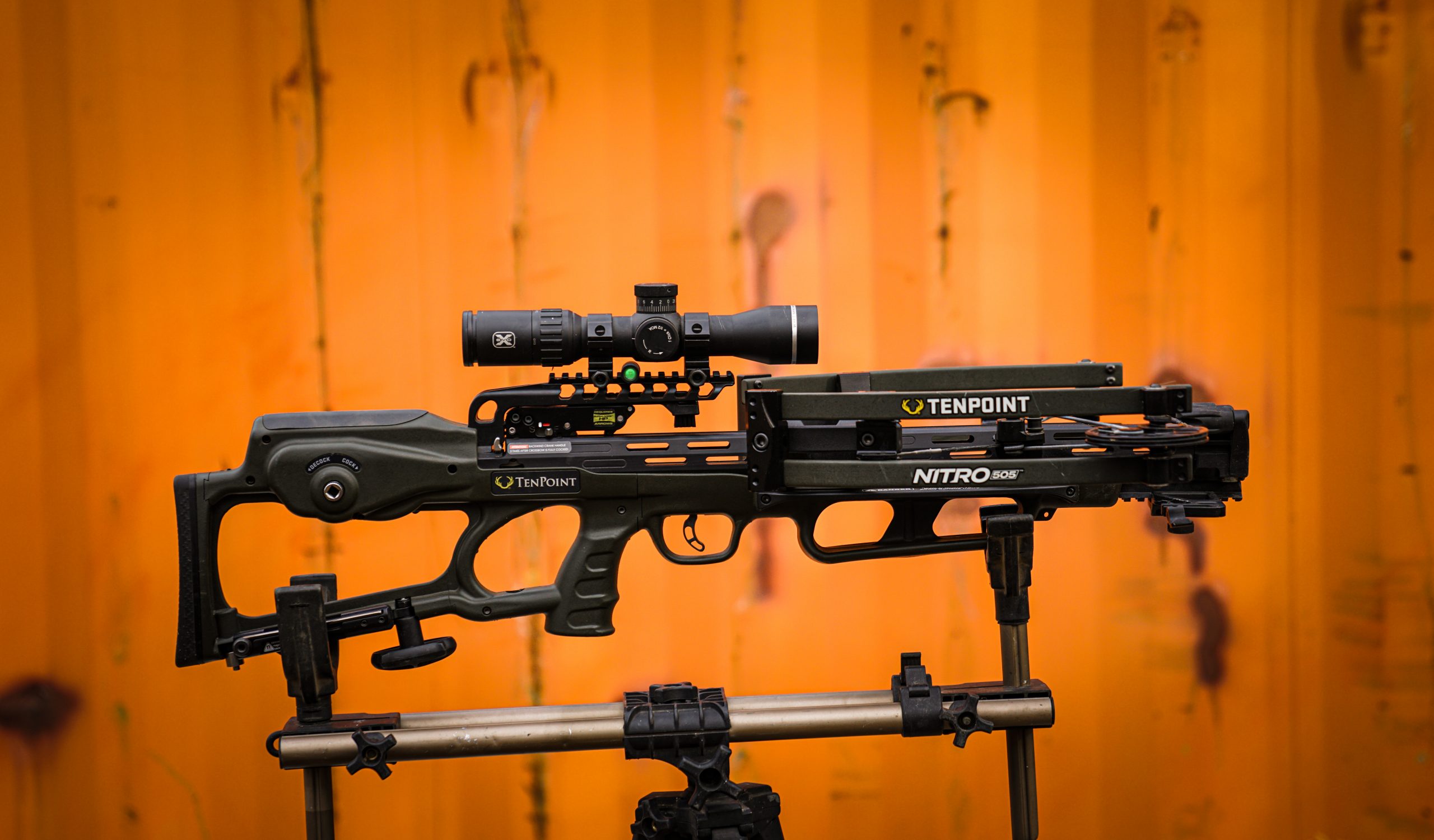 If you hate crossbows, don’t buy one. But don’t tell me these deadly, bladed projectile weapons dating back to 500 BC China aren’t cool. And if you want the most advanced crossbow to date, it’s TenPoint’s new-for-22 Nitro 505. This Ohio-made, shoulder mounted contraption shoots a 400-grain arrow at 505 FPS to produce nearly 230 ft.-lbs. kinetic energy. (That’s more than the muzzle energy of a .380 ACP, for Christ’s sake!) And after testing it extensively, here’s what else I found:

It’s also surprisingly nimble. Indeed, the 8-pound unit is only 10-inches wide at its widest when cocked. Compare that to the 30-inch-wide monstrosities of yesteryear (that’s what the 505 measures lengthwise) and you can see why this baby is closer to carrying a rifle and much less like carrying a crucifix on your back like we did in Biblical times (the early 2000s.)

Its cocking system is tops as well; it’s less like a human mousetrap wherein any slip-up or mistake can pinch your hand off and more like a smooth version of a coffee grinder. It only takes 5 pounds of force to turn its crank handle, so your daughter can do it. If you stop mid-cock, nothing happens. That’s right, the handle won’t spin around and knock you upside the chin like your drunk uncle when you suggest Vietnam was pointless. It just stays put. And if you wish to decock it while in mid-cock, just reverse the direction to let the string down. Best of all, there is none of that boat-winch-style clicking racket that’s guaranteed to run off every deer in the vicinity. Rather, TenPoint’s newest ACUslide system is the quietest, easiest and safest cocking system available.

But even after shooting the 505 through a Lab Radar (and then a Chrony to verify the radar) and witnessing the otherwise unbelievable numbers for myself, I remained skeptical. That’s because traditionally, when crossbows get much faster than about 400 FPS, they tend to drop off in accuracy due to an exacerbated effect of wind planning, especially with broadheads.

Watch the no-BS video here for yourself: The 505 recorded 2-inch groups at 60 yards with Sevr broadheads. Concerns ended. Not that I’d recommend shooting an animal at 100 yards or more with any bow (animals can move during the elapsed time of arrow flight) but if I were going to attempt such a stunt, I’d choose this x-bow.

The only real negatives I could uncover is that all that energy being uncoiled at once necessarily produces some noise. While the 505 was much quieter than expected, it was a little louder than TenPoint’s slower stuff. So there’s that, and, oh yes, the cost of the world’s most advanced crossbow technology; the Nitro 505 starts at around 3 grand.

Is it worth it? If you’re a serious crossbow hunter, you plan to hunt large game like moose and rhinoceros, you anticipate long-range shots, or you just want the best weaponry available, then absolutely.

compact so it’s easy to hunt with

not the quietest X-bow on the market