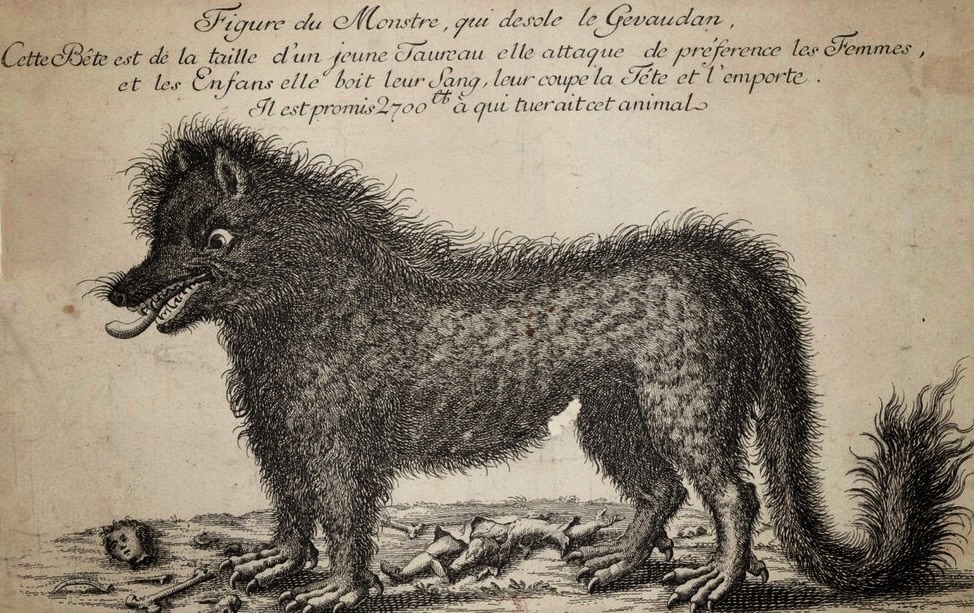 More than 500 people were killed by an unidentified creature in the former province of Gévaudan, France between 1764 and 1767. Most of the victims were killed by having their throats ripped out. Some were partially eaten.

The identity of the killer – or killers – remains a mystery to this day.

The first recorded sighting of what would come to be known as The Beast of Gévaudan was made by 14-year-old Marie-Jeanne Valet on June 30, 1764. Marie was tending cattle near the Mercoire Forest near the town of Langogne when she saw a beast she later described as “like a wolf, yet not a wolf” come at her from the woods. The bulls in the herd supposedly drove the creature back into the woods. The creature tried attacking Maria a second time but was again confronted by the bulls.

Shortly after this first encounter, something killed 14-year-old Jeanne Boulet near the village of Les Hubacs near Langogne. More attacks occurred in the months following. All those killed were, for the most part, alone and tending livestock near the forest. Most were killed by having their throats ripped open or via severe trauma to the head. Those that claimed to have seen the creature responsible described it as a wolf-like animal the size of a horse with an elongated head similar to a greyhound. It carried pointed ears, a wide mouth, a broad chest, and a long tail with a tuft at the end. It was tan to brown in color and wore black stripes.

The beast was spotted stalking a herdsman at Chateau de la Baume on October 8, 1764. Hunters flushed the animal from the woods and onto the open where they unleashed a barrage of gunfire. The beast fell at one of the shots only to rise and escape.

A few months later the beast attacked Jacques Portefaix and seven friends as they rode on January 12, 1765. They successfully drove the creature away, but news of the attack made it to Louis XV. The King was so horrified at the story that he awarded 300 livres and a free education to Portefaix and 350 livres to be shared among his fellow riders. He also pledged that France would find and kill the beast. Hunters came from all over to locate and destroy the killer.

Marie-Jeanne Valet almost killed the beast on August 11, 1765, when she and her sister were crossing the River Desges. The beast attacked and the 19- or 20-year-old Marie-Jeanne plunged a bayonet affixed to a pole into the creature’s chest. The beast escaped the attack and Marie-Jeanne became known as the “Amazon” and the “Maid of Gévaudan.” “Amazon” was rewarded for her bravery by Louis XV (a statue of 10-year-old Marie-Jeanne Valet fighting the Beast of Gévaudan now stands in Auvers Village) and he placed a 6,000 livres bounty on the beast’s head. News of the bounty was spread far and wide, even making newspapers as far away as Boston. Many historians believe this earns The Beast of Gévaudan the honor of being one of the world’s first media sensations.

The beast was finally killed on September 20, 1765, by Francois Antoine, the king’s 71-year-old gunbearer, and his nephew.

The duo shot a large gray wolf at Chazes that stood 31 inches tall at the chest, measured 5 ft. 7 in. long, and weighed 130 lbs. The wolf was named Le Loup de Chazes and Francois officially stated, “We declare by the present report signed from our hand, we never saw a big wolf that could be compared to this one. Hence, we believe this could be the fearsome beast that caused so much damage.”

But two boys were attacked by what was believed to be the creature on December 2. The boys survived, but the French government proclaimed that the real Beast of Gévaudan had already been killed. A dozen more people were killed by a creature soon following.

On June 19, 1767, a hunter named Jean Chastel killed a large wolf on the slopes of Mont Mouchet. The animal’s stomach contained human remains and the wolf itself wasn’t believed to be an actual wolf. Many described it, rather, as wolf-like.

The attacks ceased soon after and many believed that the animal killed by Jean Chastel was, in fact, the true Beast of Gévaudan. But nobody knew for sure.

To this day, historians and hunters argue over what the true beast was and if it was really killed. Most agree, however, that during the beast’s reign it attacked 610 people resulting in 500 deaths and 49 injuries. Of these, most had their throats ripped out and 98 were partially eaten.

What do you think the beast was, and if you were to hunt it, what would you use?