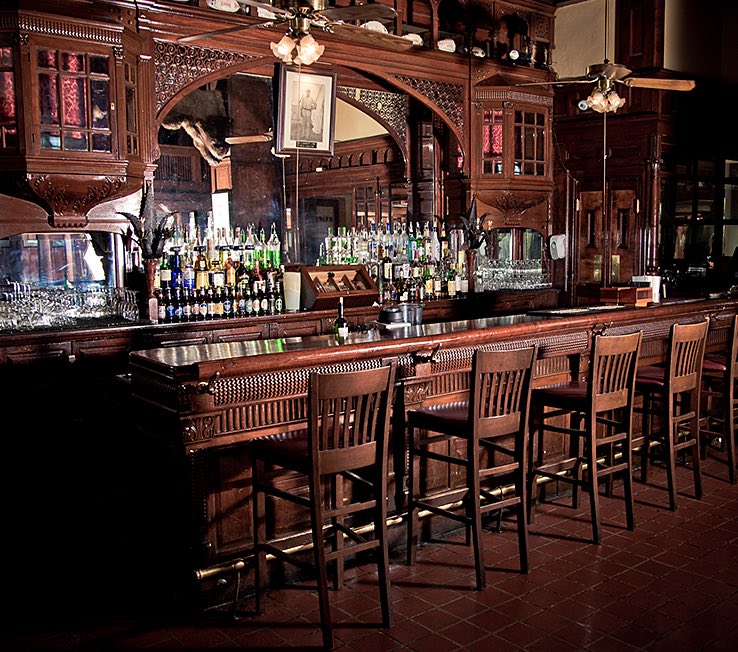 Not many bars can claim to have had a future President of the United States shoot the place up, but that’s exactly what Theodore Roosevelt did at the Menger Bar in 1898.

T.R. was no stranger to Sana Antonio’s most famous hotel bar.  He first visited it following a javelina hunt in 1892.  Sitting next door to the Alamo, the hotel bar had long been a fixture of San Antonio’s permanent and visiting elite and catered to an eclectic mix of cowboys and wealthy socialites. The bar cost an astronomical $60,000 upon its construction in 1887 (that’s almost two million in today’s funds!) and was world-renowned for having cold beer chilled on ice imported from northern states via Gulf steamers.

As the story goes (and there are many, many versions of it out there), when T.R. came into the bar to recruit men for the Rough Riders patrons began to question whether the bespectacled man with the funny accent could actually shoot. After pulling off two quick shots at targets above the bar, the crowd was convinced.

Yes, this left bullet holes in the wall.

The Menger again became the victim of vandalism to make a point in the early 1900’s when anti-alcohol crusader Carry Nation entered with an axe and quickly destroyed three feet of the bar. How she was able to do this in a room full of drinking Texans and not get shot remains a mystery to this day.

Visit the Menger Bar at www.mengerhotel.com or better yet stop by for a beer when in San Antonio.