Souvenir of a Shark Attack 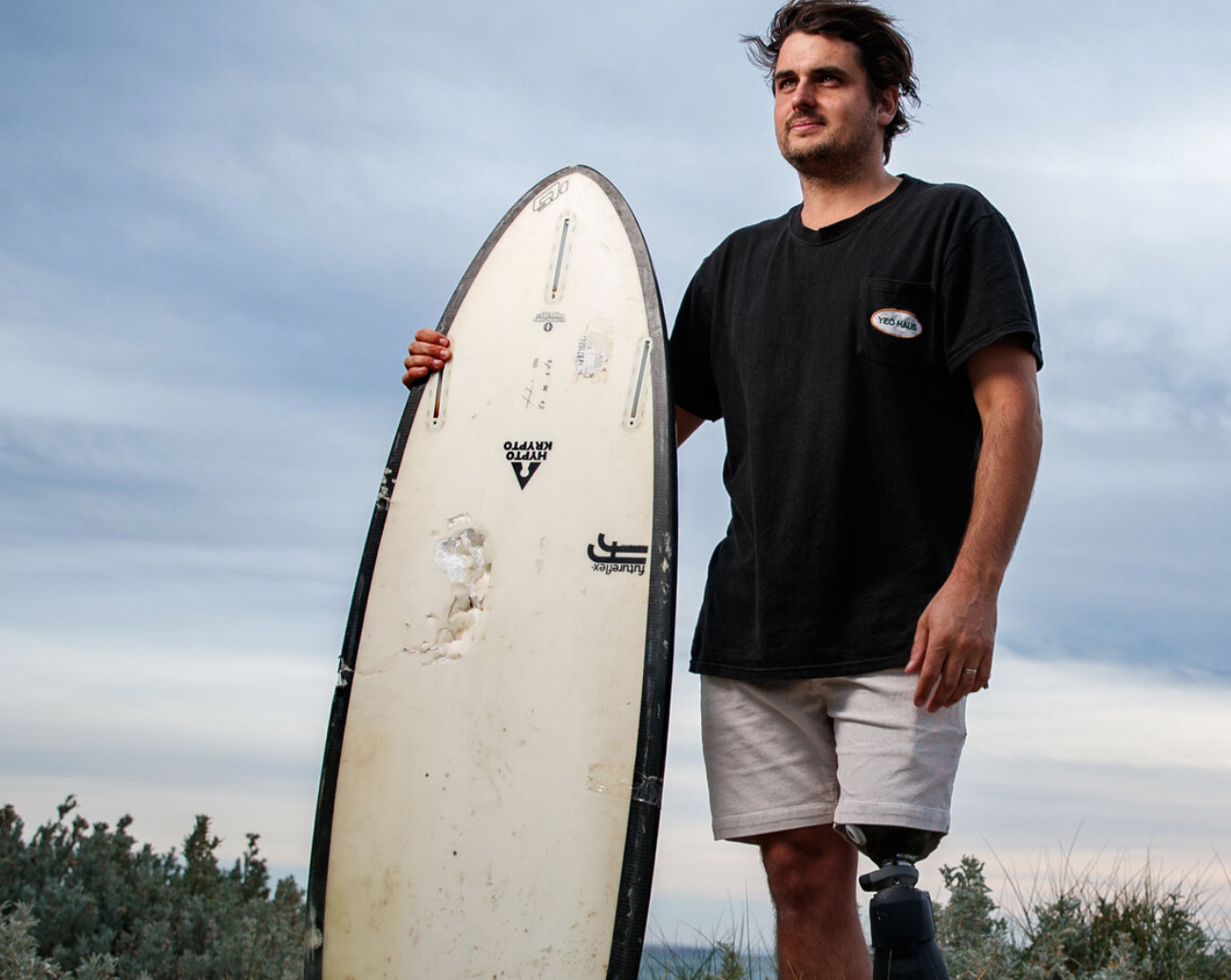 Chris Blowes is my new hero.

Because he’s a bad ass!

Chris was a carpenter by trade and an avid surfer until one fateful day in 2015 changed his life forever. Chris and two friends were surfing Right Point, Fishery Bay in South Australia on Anzac Day, a national day of remembrance in Australia and New Zealand that commemorates those “who served and died in all wars, conflicts, and peacekeeping operations,” when an 18-foot great white shark struck Chris from behind. Chris described the attack as being hit by a truck. He later told the BBC, “It [the shark] shook me about and played with me for a bit. And it ended up pulling my leg off.” While all this was taking place underwater, Chris’ two friends were frantically searching for him. When Chris and his board did resurface, his two friends quickly grabbed him and dragged him from the water and to the beach. Unfortunately for Chris, medical attention was far, far away.

The men had gone surfing at a rocky point at the base of a cliff some 18 winding miles from the nearest hospital. Chris’s friends put a tourniquet on his leg and carried him on a makeshift stretcher up the spiraling cliff face and to the road. The drove him down the road to where an ambulance stood waiting. Paramedics performed CPR on Chris for 90 minutes in an effort to revive him. He was finally brought back to life at Port Lincoln hospital.

While Chris was recovering, police went to the beach to retrieve his surfboard as evidence of the attack. They found one of the shark’s massive teeth embedded in the board. When Chris heard this, he immediately wanted the tooth as a souvenir. Chris said, “It was stuck in my board. I would never kill a shark for its tooth but it took my leg [so] I can’t see any reason why I can’t have that. The shark isn’t getting its tooth back [and] I’m not getting my leg back.”

The reason Chris couldn’t have the tooth falls under Australia’s Fisheries Management Act, which makes it illegal to possess, sell or purchase any part of a great white sharks. Those who break the law face a fine of over $121,000. Despite the law, Chris really wanted that tooth and appealed to authorities several times to no avail. News of Chris’s attack and his want of the tooth made its way to a local politician who appealed to the Department of Primary Industries and Regions, SA (PIRSA) on Chris’s behalf and Chris was given the tooth. David Basham, South Australia’s Minister for PIRSA, said returning the tooth to Chris was the least his department could do.

Chris returned to work, began surfing again, and now gives motivational speeches about his attack and his recovery. He shows the tooth to those he speaks before. He also said the tooth will serve as a, “good souvenir to show my grandchildren.”

I agree with David Basham; giving Chris the tooth of the shark that tore the leg from his body was the right thing to do. Chris asked for a tooth – he didn’t ask for the agency to allow him to release his inner Captain Ahab and give him permission to hunt the shark down.

Chris handled his attack with grace, perseverance, and not an ounce of self-pity. He literally turned a horrible situation into one that allows him to motivate others.

He’s my new hero for all this and…the fact that he possesses a pretty cool souvenir.