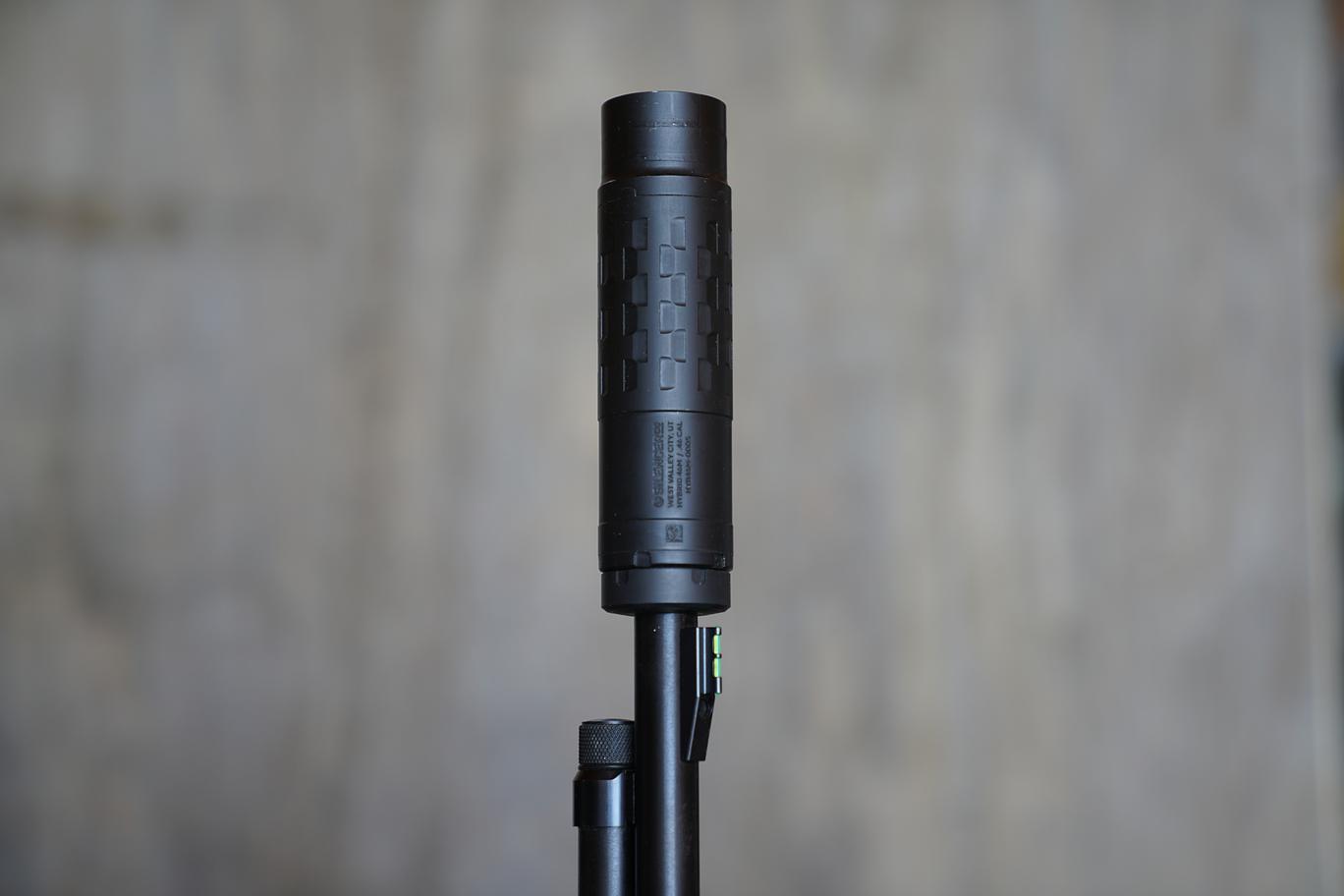 You know why the Hybrid 46M is the most versatile suppressor on the market? Because unless you happen to have a .50-cal, a .470 Capstick, a .500 Nitro Express, a 505 Gibbs or some other even more obscure-caliber shoulder cannon, the 46M will fit it.

I’ve currently got one on my lever-action .45-70 for hunting boars at night so I don’t wake the neighbors, but it’s equally fitting on my Glock 40 10mm after swapping out the direct thread attachment for its piston-system. It takes about a minute.

You see, the Hybrid 46M is totally modular; it can be shortened to 5.8 inches by removing the last baffle section and replacing it with the endcap. As such it still reduces sound below the hearing-damage threshold, yet makes your firearm a little handier. For most hunting I like this setup because I’m not demanding mouse-whisper quiet here; Rather, I just want something to protect my hearing even while not wearing muffs–so I might be able to hear a deer as it tiptoes through the forest, or, more likely, my wife frantically calling me to come back home and fix the damn toilet.

On the other hand, when I need maximum suppression while on the range, I go with the 9-inch (without mount) full shebang that drastically reduces noise of even big powder-burning magnums like .300 Win Mag. (aka, The Lord’s Caliber) and .375 H&H. Because the unit is made of titanium, it still weighs under a pound.

If you buy one, figure out what guns you wish to use it on before ordering several of Silencerco’s proprietary attachment devices (direct thread, quick-attach, piston assembly, etc.) so you can easily swap the can from gun to gun, on anything from small pistols to AR carbines (including .450 Bushmaster and .458 SOCOM) to your largest hunting rifles from .338LM on up to the most powerful of ‘em all, the .460 Weatherby Mag.

While most of us think it’s absolutely fucking ridiculous that the federal government has made it difficult for hunters and shooters to protect their hearing and that of those around them, I commend Silencerco for making a product that can minimize the time and money you’d otherwise spend buying multiple cans for multiple guns. If you only intend to buy one, this one is it. But I’m warning you: Once you buy one, you’ll certainly want another. $1,117