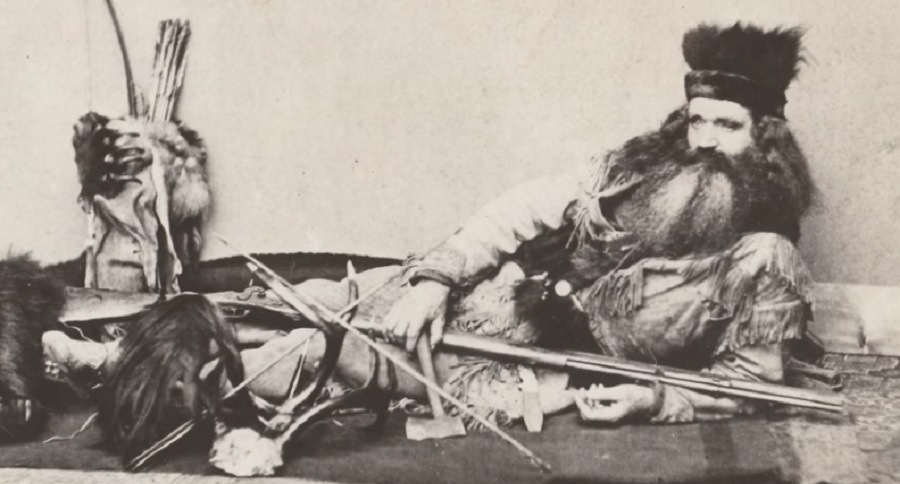 Mountain Man Seth Kinman killed more elk and grizzly than he could remember, used their pieces and parts to craft furniture, then gave said furnishings to US Presidents and other notable characters.

Seth was born in Uniontown, Pennsylvania on September 29, 1815. His family moved to Illinois in 1830 where his father opened a mill then fought in the Blackhawk War. Seth kept the mill running after his father died but sold it in 1839 to try farming. He married Anna Maria Sharpless in 1840 and had five children. Seth gave up farming sometime after getting hitched and instead operated the Eagle Hotel in Pekin on the Illinois River.

Seth left his family and rushed to California in 1849 to claim his fortune in gold. Finding little in the way of gold or success, he took gigs as a fiddle player before becoming a full-time market hunter in and around Fort Humboldt in Eureka. For this job, Seth used the rifle left to him by his father. The percussion-conversion rifle was almost four feet in length and had a history that went much further back than Seth’s father.

James Kinman supposedly purchased the rifle from a man in Kentucky who swore that his father had used it under Gen. Andrew Jackson’s command at the Battle of New Orleans on Jan. 8, 1815. This fact is engraved on the barrel as, “Gave Many an Englishman a Belly Ake / From Off the Cotton Bails at New Orleans / Jan. the 8 1815 Old Kentuck.” The rifle was also said to have been used to kill Major General Edward Pakenham during the War of 1812, but most historians believe Seth fabricated that story.

Seth used the historic rifle to kill more than 800 grizzlies and countless elk (50 in one month alone) in his lifetime. Seth’s ability to slaughter animals brought him fame and celebrity. But not all those who met Seth celebrated him. Methodist bishop and writer Oscar Penn Fitzgerald met Seth on a steamboat in California and later wrote of the drunk man he encountered in his book The Ethics of Grizzly Hunting. Fitzgerald stated, “His countenance was expressive of a mixture of brutality, cunning, and good humor. He was a thorough animal. Wild frontier life had not sublimated this old sinner in the way pictured by writers who romance about such things at a distance. […] His eyes were nature’s special label of one of her malignant creations.”

Seth often turned the grizzlies and elk he killed into chairs crafted of skulls, bones, antlers, and furs. He presented these chairs in person to such US Presidents as James Buchanan, Abraham Lincoln, Andrew Johnson, Ulysses S. Grant, Rutherford Hayes, and Grover Cleveland. Buchanan liked his chair so much he gave Seth a rifle and two pistols. Although Lincoln didn’t offer gifts, he and Seth became friends. Seth honored his friend after his assassination by appearing in two of Lincoln’s funeral corteges.

Seth dictated his adventures to a scribe in 1876. These were published in 2010 under the title I’m a Gonna Tell Ya a Yarn. Seth died in 1888 after accidentally shooting himself in the leg. The leg was amputated but Seth died soon thereafter from complications from the surgery.

None of Seth’s remains were used to craft a chair.