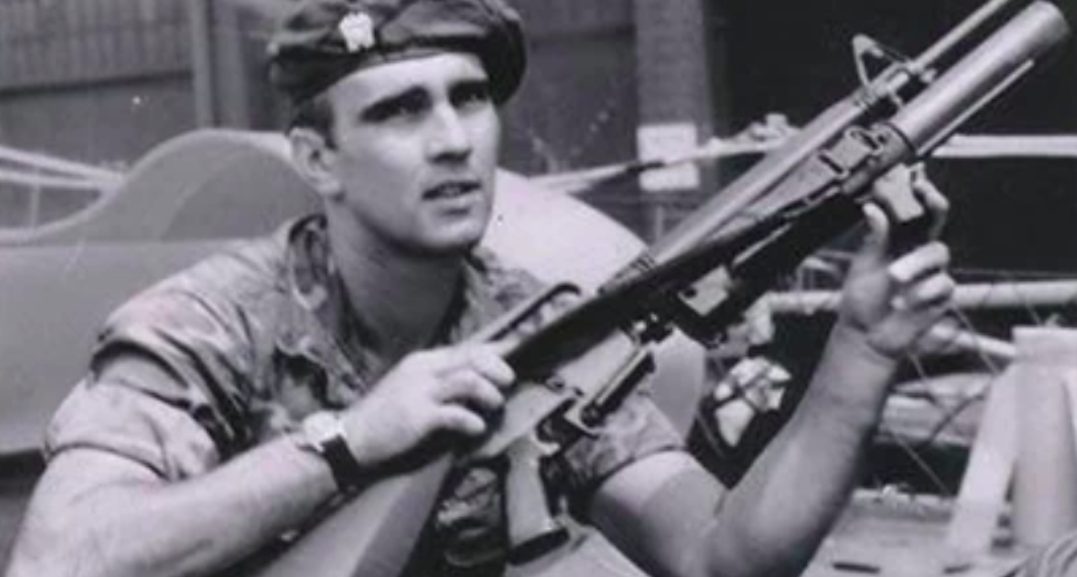 One of the 20th century’s true American badasses, Richard “Demo Dick” Marcinko, passed through the fiery gates of Valhalla on December 25, 2021, no doubt igniting a shape charge and letting himself in if he wasn’t invited. He was 81.

The Pennsylvania-born, highschool-dropout-turned Navy frogman (UDT class 26) fought multiple tours in Vietnam including in the dreaded Mekong Delta and during Tet where he snatched more souls than the devil’s courier. If you’re wondering who the hell Walter from the Big Lebowski was talking about everytime he referenced “the men in the black pajamas,” he was referring to the the guerilla-style Viet Cong soldiers who Marcinko hunted and handily killed on their own punji-spiked turf–while wearing their loose-knit native clothing that he adopted for jungle warfare. For his actions he received more stars than a family of Christmas trees.

After serving two tours and being promoted to Lieutenant Commander attached to the then-infant SEAL Team II, Demo Dick (nicknamed of course for his virtuosity in blowing shit up) spent nearly two years as an attaché in Cambodia before eventually being tapped by Admiral Thomas B. Hayward himself to create the most lethal group of fighting men ever assembled, SPEC OPS warriors that could be dropped from high altitude into the ocean where they’d swim and slither to remote battlefields or plunged low altitude under enemy radar to kill terrorists anywhere in the world without fanfare.

But Marcinko often imploded the rules of government in his single-minded mission to fund and train his beloved SEAL TEAM 6–so named to make the Russians think there were at least six such teams. Seldom did he have nice things to say about the non-combat-experienced, politically appointed paper pushers who often commanded him. (Indeed, he often referred to these suit-wearing folks “cockbreaths” in his book, Rogue Warrior). But that same abrasive, get-shit-done-while-protecting-your-men style was damn effective in laying the foundation for what the Navy SEAL teams have become–i.e. an elite group of self-described knuckle-dragging, door-blowing, beer swilling, hell-raising, commie-crucifying, professional American trash men who take out bad guys by the bushel.

In 1990 however, Marcinko’s penchant for making enemies in high places caught up with him when he was sentenced to 21 months in prison for conspiracy to defraud the federal government, in what appeared to be a military contract/kickback scheme wherein his two-man company made $113,000. He maintained his innocence throughout, but nonetheless he was stripped of his soldier’s honor. After serving his time he was successful as a CEO, a Hollywood consultant, author, frequent news guest and a radio talk show host, among other ventures.

Marcinko’s aforementioned book released in 1992, Rogue Warrior, and later Red Cell, spurred an entire generation of young men to join the Navy and attempt to become a SEAL just so they could try to be half as badass as Demo Dick. If you haven’t read these page-turning classics, oh you must!

Me? I read Rogue Warrior when I was 10, and realizing my limitations as a future SEAL, the very next day bought a veritable shit pile of cherry bombs to blow up a bunch of anthills and few degenerate mailboxes that needed killin’. My goal was to one day shoot a full-auto MP-5SD and … write about it. Turns out I couldn’t do that half as well as Marcinko did, either.

No doubt, if there were more Richard Marcinkos in America, we’d all be better off. For one, the Fourth of July holiday would probably last all year … and commies wouldn’t dare poke their sinister snouts out of their smelly little ratholes.