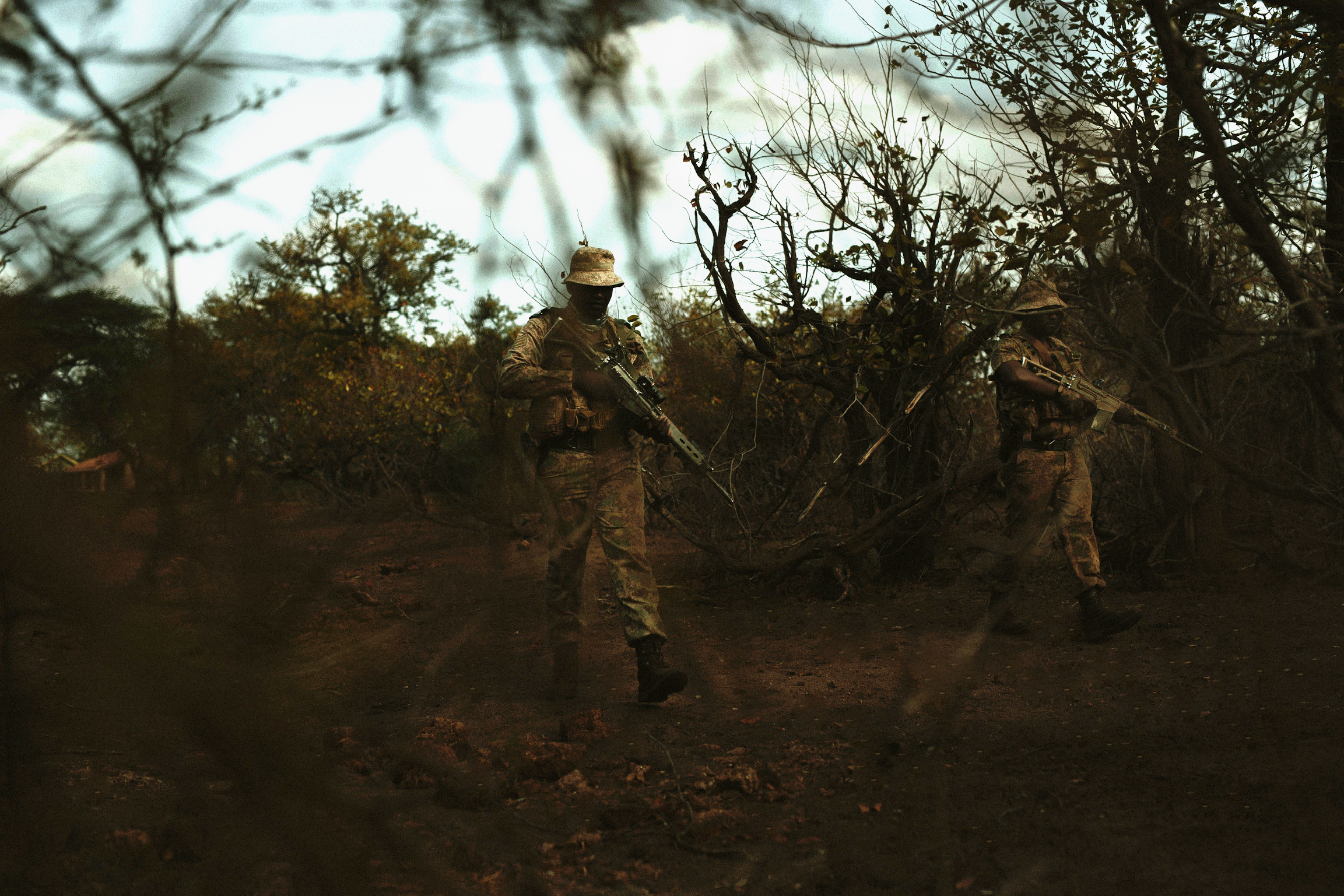 Nathan Edmondson is the president of the non-profit Eco Defense Group. While its work is clandestine in nature, FE has invited Nathan to share moments afield as it trains and equips rangers on the frontlines of Africa’s poaching crisis.

It is February; summer in Southern Africa.  We are above the Tropic of Capricorn and beneath the Congo River. I can’t say exactly where we are, but this is another day of observation deep in a national park, alongside a group of brave rangers who battle tirelessly in the rhino war.  To the outside world the men are faceless; here I have learned every expression and look and know each of them from afar, as most days are spent in near-silence.  Often they go days without verbal communication.  Every day is like today—tracking poachers, following spoor through dense bush.  We spend many miles with the Southern African Park Rangers working out operational needs.  I walk with them, often with our U.S.-based consultants, but today I’m alone, in the rear, quiet on the edge of a war zone. We pass along the fringe of a conflict few know is even happening.  Hopefully we are undetected and unobserved.

Today the track is long and grass seeds cling to my pants exposed socks. Sharp acacia branch ends that seem to be of no mind to the rangers ahead drag harsh lines down my forearms. The grass is knee-high, the brush tall and thick. The air is still and oven-hot. The dog must soon rest; it is past the apex of day by now but the sun is still still over the tambootie trees, and I hope that the path turns and we can soon be in the hanging shade of the figs along the river.  It is not likely that the poachers went that way, but I know also that the cut of the riverbed is cooler and even without wind the air is less stuffed there.  Eventually we must move that way, though, as the river bends north eventually and will cut our path.

The team leader eventually makes the call and we break off.  The rangers relax and seem unaffected by the heat, though each in turn makes some comment about it as if for a report. We will wait until dusk and see what will follow. The radios are quiet; what I think is an occasional buzz off the comms is each time a grasshopper. A woodland kingfisher gives its call; the chirp and the stuttering diminuendo like bouncing down a stair.

I am an observer only here, and even in the respite I watch and listen and do not speak. The jokes are few, the laughter muted or limited to a smirk between the rangers in their native language.

Eventually even they are quiet, and we listen and simply exist for a time in the bush. One ranger naps against a jackalberry, his rifle against the bark.  Another stands with his hands on his barrel in the shadow, watching like a sentry, duty ingrained; what his eyes see in the bush as a home I will never quite know.

There is a bird that gives a haunting call at dusk; it is called a gray-headed bushshrike, but in Afrikaans it is a “spookvoel,” or ‘ghost bird.’  A large carnivore, indeed it calls out a low rolling whistle, a rhythmic call that seems to float in the air and sneak its way through the brush untouched in its passage until it can hang in the open space over the sandy river bed between trees. Overhead the moon appears, and Venus, Mars, Jupiter, Saturn appear in an extraordinary alignment, a single line that is the visible solar system.

Before night falls, a lone female giraffe ventures down to the river bed, looking for moisture on the young green leaves of an acacia with roots sneaking deep under the sand to find the water that remains after the season flow. The giraffe is bolder than her mother, who leans as far from the bank as possible while extending her tongue to forage. Two others are behind them, gray-orange and black and walking away slowly with proud struts and careful steps, elegant always, cautious and strangely curious. What they fixate on, come storm or helicopter, they will not look away from. They are great indicators of danger. Even when they don’t flee, they stare fixedly.

The ghost bird calls again and the giraffes all turn to wander; a small troop of vervet monkeys sit and enjoy the sand, picking at one another and playing with small stones. They look up and study the giraffes as they pass, one species in semi-ignorant observation of the other, no meaningful exchange, but only the observation of mutual purpose and participation in the hostile ecosystem and perennial fecundity.

Bats begin to fly overhead, laser-like squeaks and rapid flapping and then a pair of doves sails down the treeline, seemingly to herald the onset of dusk. The sky is now peach that lines velvet-blue and the parade of planets dominates all.

The op is soon over. We drive from this place and inadvertently divide a herd of elephants; a young bull, not old enough to be bold, shakes his head in frustration at us and stamps the ground.  A cow takes her calf close and watches us with one glinting eye from beneath a heavy brow and a wide skull.  She deems us no threat but pushes her calf away in case. Behind us the bull finds a gap and rejoins the herd.  They move off into darkness; gray into black, ghosts themselves.

The ranger beside me has set his rifle on the floorboard by my legs. I turn off my torch and pull my arm inside the window. I am lulled by the bakkie bouncing over the rough road. We do not speak now; the heat has taken that will from me, and ranger perhaps is silent out of habit.  The headlights are yellow, the road back to our lodging is far.

The night ends without incident; sleep is deserved though work is unfinished. Work is always unfinished here. No day is unearned, no moment of peace and stillness under a tree at dusk without the prior toil of day.  The delirium of near-hydration is almost an intoxicant and its remedy comes too slowly; the fatigue is overwhelming. This is a threshold upon which these rangers live.  Great performance is expected from a scarcity of resources; every calorie must be multiplied to three. I have the luxury of a restful night; if a call comes, they must answer it.  My work for the day is done.

A call indeed wakes me, but of a different sort.  A lion, then two, communicate amid the territory beyond my thatched hut. What alerts me at first soon lulls me asleep, as I am in relative comfort despite the threat of the apex predator, for I am an outsider, a mere observer. The rangers must stay vigilant, the lion will hunger. But I have the luxury of rest.