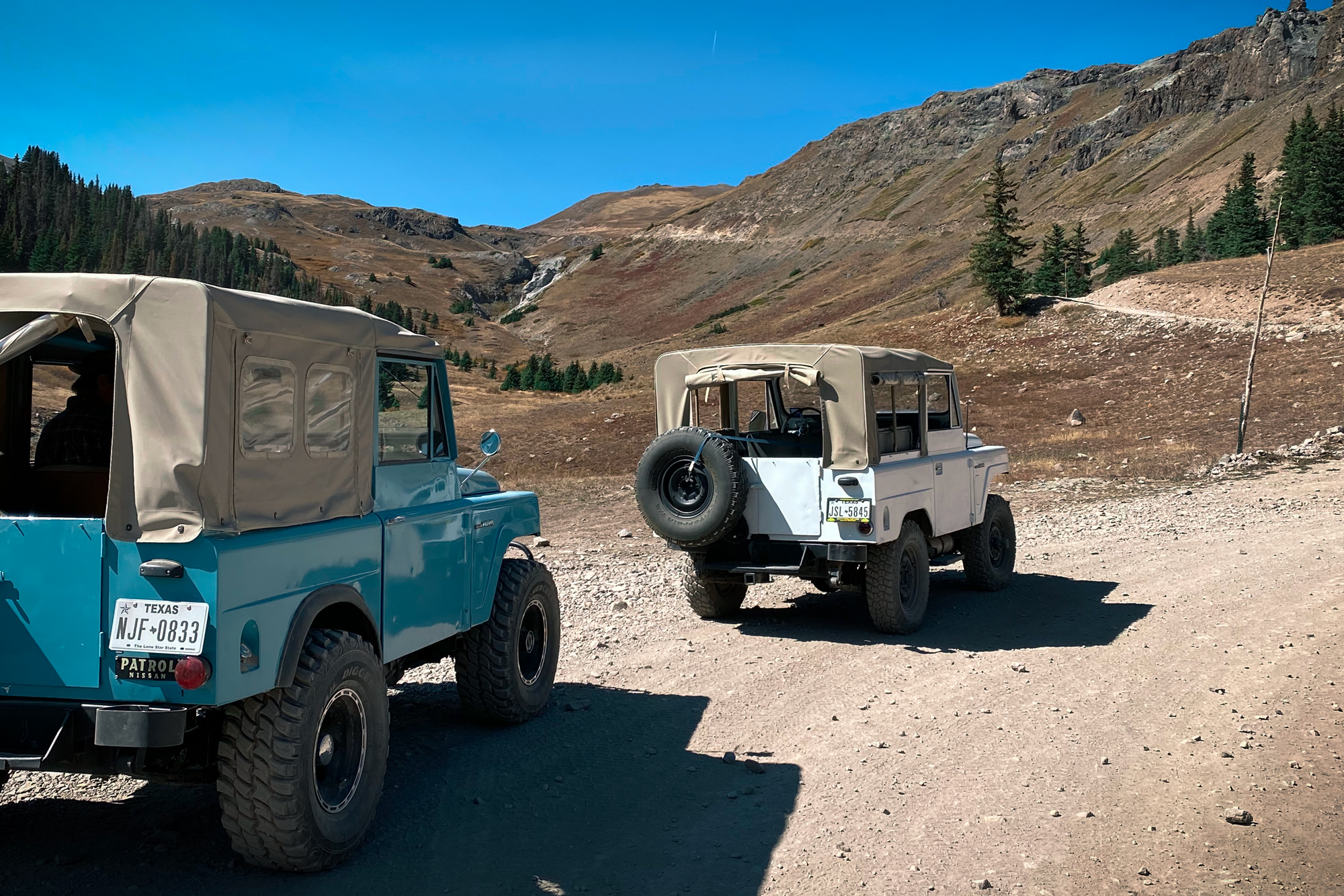 Life is a journey. Within the span of a lifetime, epic journeys take many forms, but they all have one thing in common. Some journeys are arduous like the Phoenician Steps, while others are longer and terminate on an abandoned military dirt airstrip near Crook’s Corner, Zimbabwe. Then again, there are those in between, those that are neither particularly long nor arduous. Their duration is marked with suspense conjured up from within the darkness of the unknown. This journey was simply an opportunity to turn back the hands of time for a day and do it the old way, not the simple or comfortable way, but the way of our fathers. Our journey’s goal was to complete the Alpine Loop in vintage trail rigs. Rigs and road that will leave us with very few interstitial memories, but at the end of the trail, it should deliver that one thing that all epic journeys have in common—they are unforgettable.

The L60 Nissan Patrol is a castoff from a military contract bid whereby the Nissan competed against Toyota’s FJ40 for Japan’s equivalent to our Willy’s M38A1, sometimes known as the Military Jeep II CJ-5. Toyota won that military contract because it was cheaper per unit. The FJ40 has become a legendary vehicle around the world for good reason. However, the Nissan L60 Patrol proved that for just a little more money, you get a lot more capability. The Nissan L60 was the product of the heavy truck division of Nissan. Though never very numerous in any country, it left its mark in Australia as the only vehicle to make it across the Simpson Desert while achieving cult-like followings in South America and Africa. The Nissan Patrol is still an honored badge to this day, with new Nissan Patrols for sale just about everywhere on the globe except the USA.

The United States received approximately 2,700 Generation-2 Patrols between 1961 and 1969; it’s the most collectible and featured in this trip as it offers classic 1960’s style and utilitarian ruggedness. After 1969, with many mechanical but few cosmetic revisions, Nissan pulled the Patrol out of the US market to focus on their Z model sports cars. Today the vintage Patrol lives on and strong, thanks to a handful of enthusiasts that help each other fix and tune their Patrols while bringing ever so few more back from the hands of ol’ Father Time.

The high country requires the proper gear. For this journey, we packed a few spare parts for the Patrols like tire patches, an air compressor, tow straps, and basic tools. The plan was to rally together the day before to ready each rig before the ascent on the next. COVID-related challenges reduced our planned ascent to 13,000 feet to just a few patrollers for the Oct 1 loop. Chris Lakin, an accomplished engineer from Montrose, joined me for the “Loop.” Chris is a great field mechanic with a deep understanding of the mechanical aspects of the L60 Patrol. In preparation for this event, I had both of my Patrols in good shape. The need for a pre-ascent mechanical survey was not needed, so he arrived on the morning of October 1, ready for the road up through the canyons then over the top of the Rockies.

Chris preferred to drive the blue 66 Patrol, known as Phoenix Patrol, while I was more than happy to drive my white ’63. Both sport the same 4.0L P engine with a two-speed transfer case and winches that receive their power from the motor, aka PTO, rather than the battery. One really unique feature that we have yet to see in use is the rear PTO option. The base transmission was offered with the potential to attach additional drive shafts to power front and rear implements. As reported, both Patrols have this feature to power the front winches, but a rear driveshaft could be added to power a water pump or saw for cutting lumber. We have heard distant stories of the Patrol used in both of the applications in South Africa, Australia, and South America, where the Gen 2 was much more common.

The Alpine Loop gets its name from a circular high mountain trail that begins and ends in Lake City. The Alpine Loop is an interlocking group of trails that connects the relatively close cities of Lake City, Silverton, and Ouray; Telluride can be tacked on farther to the west through Ouray (pronounced Uray after Chief Ouray of the Ute tribe). It is one of the highest trails in Colorado. Along the way, we will pass many a ghost town, not the least of which will be Capitol City. The Loop is actually the combination of high mountain county roads that meet above the once-thriving mining town of Animas Forks. The two county roads added together to run for 56 miles through God’s Country above Lake City. This area is well known for peaks over 14,000 feet or “fourteeners.” The lower forty-eight states boast 96 peaks in excess of 14,000 feet, all of which are west of the Mississippi. Of those 96 peaks, 58 reside in Colorado. Of those 58 Colorado peaks, five are in the immediate vicinity of Lake City. Scaling fourteeners is a common bucket list item for hikers. They are a test of stamina and should be fully respected. Sadly, a young, experienced hiker fell to his death in the area a few days after we passed through. The same fate awaits careless drivers with poorly maintained vehicles as sheer cliffs wheelside follow you from start to end like campfire smoke.

Lake City was our jumping-off point, and it was time to jump off. From Lake City’s base elevation of 8,861 feet, we chugged up the dusty gravel road leading us through Henson Creek Canyon on CR 20, passing deserted mines and abandoned charcoal and lime kilns that served those with gold and silver in their veins as we followed the snowmelt-fed stream upward. We were on a mission with untold memories lying in our path, so we did not take time to stop for the brief hike down to Whitmore Falls, but we should have. We climbed farther, both Patrols serving us well. The fall colors amongst the aspen and sycamore trees were magical as the midday sun radiated through their translucent yellow, gold, and crimson leaves. We passed several modern trail rigs and more than a few UTVs. The vintage Patrols received a “thumbs up” from young and old, men and women alike. Interestingly, we did get more big smiles from the younger of the drivers.

As we approached 11,500 feet, Chris reported via our hand-held radios that the Rochester carburetor was performing better as we gained elevation, which was a welcome mechanical report since our 145 HP P 40 engines were losing 3 percent of their herd every thousand feet from sea level they climbed. The single barrel Rochester was the only question mark as the Patrol Club leader, Leslie Brown (with many miles under her Patrol axles on Big Bear Mountain outside Los Angeles) warned in the weeks leading up to the ascent. She felt the Rochester might leave the motor fuel-starved at the worst possible time. Well, the trail offered many opportunities for that, so trepidation replaced the oxygen that once filled our lungs at lower elevations. My white 63 Patrol, known to some as Command and Control Vehicle 5 (CCV5), sported the venerable Hitachi VC 42 carburetor, and it had already performed perfectly on a test run to Engineer’s Pass last year. Phoenix Patrol will get a VC 42 within the next several months, so that it will be better prepared for the next traverse.

The ascent required us to shift into ever-lower gears to maintain proper motor compression in our P 40 engines. After passing a milestone named Palmetto House, we shifted into our lowest gear in low range for the final leg up to Engineer’s Pass. The final leg was generally gradual while punctuated by what seemed like near-vertical switchbacks that could scare the yellow off cheddar cheese. It was important at these times that our engines performed perfectly, and they did. We reached Engineer’s Pass at 12,800 feet within a couple of hours. Though the official sign is posted at 12,800 feet, the loop still requires a climb of several hundred more feet to attain our first true resting spot, Odom Point. At Odom Point, a prominent precipice with a great view of distant peaks in most directions, off-road car clubs gather there to celebrate their partial accomplishment. We saluted our partial victory too, with Glenmorangie 18, naturally.

After collecting our senses and further searching our souls and Patrols, we agreed that mechanically, we had no reason to double back into the known. We fired up the remaining one hundred horses left at 13,000 feet in our engines and set course for Animas Forks, then Cinnamon Pass. This leg of the trail included a descent down to 11,000 feet while passing through several steep descending switchbacks before starting the long slow slog up to Cinnamon Pass. Thirty minutes into this leg, we arrived at Animas Forks, where I refilled my water bottle and started the slog on CR 30. The ascent will get your attention as passing spots on the climb out of Animas Forks on the mostly one-lane trail are littered with football-sized loose rocks and offers few bulges of earth wide enough for passing. Once through that gauntlet, a couple of switchbacks left our eyes looking skyward as if we were astronauts strapping in for a moon shot. Once past those heart stoppers, this slog spans many high-altitude miles that taxed our engines and cooling systems as we rumbled along in low range first gear. The pristine cloudless October day added to our drama. Just prior to the Cinnamon Pass summit, I experienced our only mechanical event. CCV5 experienced a brief vapor lock in its VC 42 carburetor. After less than five minutes, the cool mountain air reliquefied the fuel, and we were back in action. Minutes later, we were at Cinnamon Pass at 12,784 feet.

After briefly stopping atop the windswept pass to rest our machines, we catapulted off the pass descending through many switchbacks that pointed our front bumpers to Dante’s Inferno. This was a place we surely didn’t want to stop, so we coasted downward with the gears controlling our speed. While heading back to Lake City on CR 30, we passed American Basin and Handies Peak. I had hiked to the summit of Handies Peak the month before atop fresh snow with my nieces. Still, lower down, we dug our hillside tires into the granite walls as a sheer drop of several hundred feet haunted us from less than the length of a child’s ruler from our passenger side tires. I always try to get my passengers to look down as we pass this area, but they rarely do. Miles downslope from the tight walk along the granite cliffs, we pass the four-mile mountain trail leading up to the ghost town of Carson which sits just under the Continental Divide. Passing this exit, we entered a more scenic panorama of bright yellow aspens as the Lake Fork Creek opens up into the meadow country just above Lake San Cristobal, the largest natural lake in Colorado. Now we were on the home stretch.

After several more dirt-track maneuvers to avoid rocks and holes in the county road that would make Billy Moyer from my home state of Arkansas proud, we completed our journey, passing Lake San Cristobal on our way to Highway 149 back to Lake City. Chris described it as an epic adventure. I could not agree more. Next year we look forward to more Patrols and more of the unforgettable.

This article by David Bartlett first appeared on Expedition Portal.