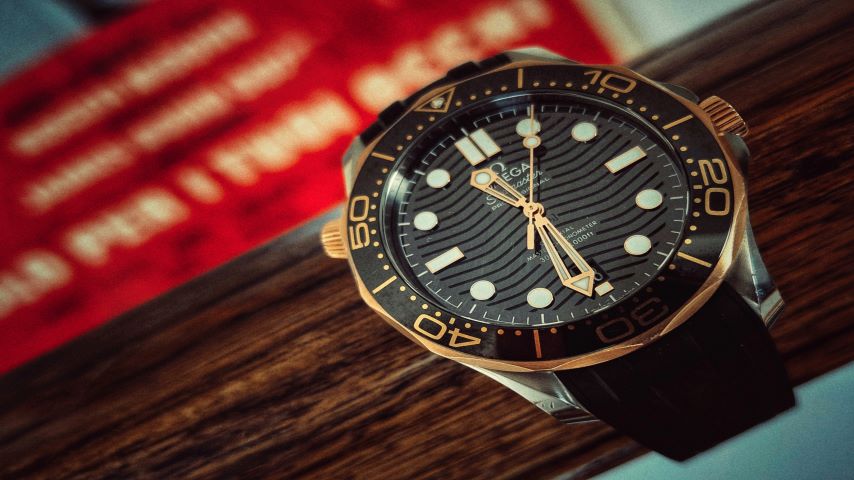 Now, it’s time for full disclosure, I’m the proud owner of a SMP. It all started in college. My roommate, the consummate Mexico City Playboy, had one and I remember wishing I could afford an Omega of my own.

After school I sort of forgot about them because paying rent and buying a futon took priority. Then in 2018 Omega launched a new SMP. Within a week I was at the Miami Design District Omega boutique paying retail for my Sedna gold two-tone on a tropical rubber strap. It was obvious I was overpaying when they gave me a whole bottle rather than just a glass of champagne with my purchase. But honestly I didn’t fuckng care, I just wanted it.

What drew me so intently to this watch?

Part of it has to be the brand association with James Bond. Author Ian Fleming, as well as his literary character James Bond, consistently wore Rolex. In the 90s, however, Pierce Brosnan was a new Bond for the post-Cold War era. The costume designer for Goldeneye decided that because of Omega’s long-standing history supplying the Royal Navy, the newly released Seamaster Professional was a better choice than a Rolex.

The first 007 film I went to in the theaters was Goldeneye. Still pumped from Pierce Brosnan’s epic bungee jump and his suspension of disbelief while testing accuracy with an AKS-74U, I saw the SMP. In a dark room, with the lume glowing on the dial, the audience hears,  “You’re late 007.”

But let’s talk about the current, most up to date version of the watch I purchased.

There’s a depth of intricate details that don’t show well in photographs, features that you get to slowly discover in your first weeks of ownership. First thing you find is the thick, laser-engraved waves on the 42mm watch’s high-gloss ceramic dial. I also love the skeletonized hands and the helium release valve that even the most serious divers will never need.

Like any expensive mechanical luxury good, the power plant is as important as the appearance. Alongside most modern Omegas, the SMP is powered by a co-axial movement designed by horological visionary George Daniels. The Co-Axial escapement’s key element is the almost total elimination of sliding friction, producing greater accuracy and longer service intervals. This is truly a step up from what other manufacturers offer.

Don’t worry, you can see this glorious movement through the watch’s clear sapphire crystal case back. It’s a feature not available from Rolex.

The first Seamaster appeared in the ‘40s in the form of what today we would consider a dress watch. In the 1950s SCUBA was the action sport fad, and Omega obliged with a rotating bezel timepiece that took on the class-defining Rolex Submariner. To prove its toughness Omega strapped the watch to a plane and flew it over the North Pole. Jacques Cousteau wore one during a dive in the Red Sea. All in all, it was a hard working tool-watch.

Let’s look at it like a family with the original Seamaster dive watch as the greatest generation patriarch. The oldest grandkid, who looks most like his pop, is the entirely retro Omega Seamaster 300m. The practical but over-achieving middle child is the Planet Ocean. The SMP is the trust fund party boy. Born in the 90s, it’s an almost unnecessarily luxurious take on a dive watch.

Peers of the SMP in the watch world include the AP Royal Oak Offshore, the Patek Aquanaut and the Rolex Yacht Master. They’re all definitely more at home in South Beach than diving in the Keys. That’s not to say these watches are not capable, but honestly they are as much a status symbol as a tool. Cousteau’s grandsons still scuba dive but they also live in L.A., date models, and give Ted talks.

Not that I really have a problem with that; just because it helps you pull THOTs at the club doesn’t mean it won’t work out in the field. Just do me this favor: Once you have it, don’t be afraid to get it wet.