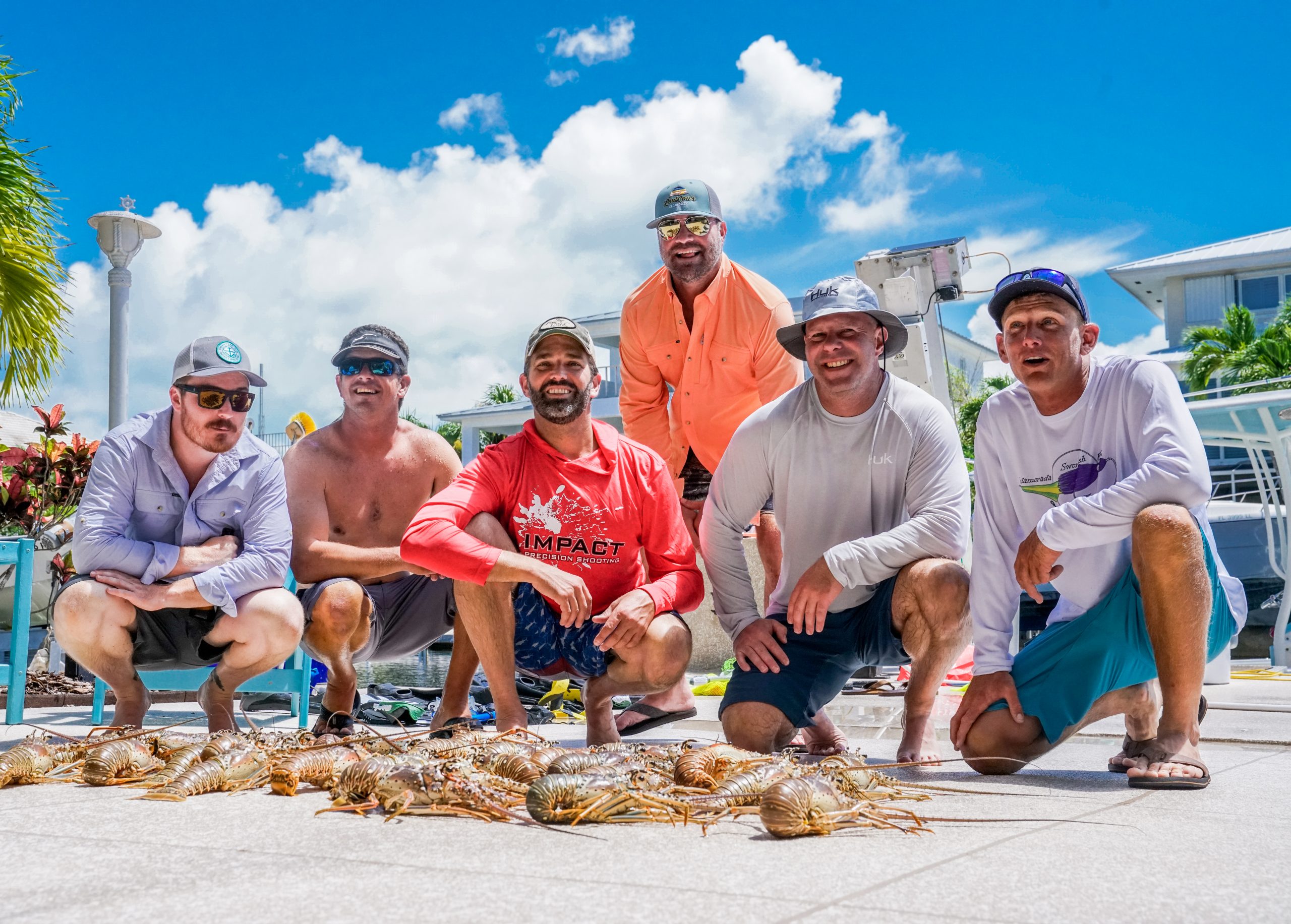 “You’re not worth a shit at diving for lobster but I’ve never seen someone drink so many beers before noon.” -Don Trump Jr. to John Hill

Don, Pat Hemingway Adams, Gary Turner and I get to Islamorada. Earlier in the day, I told John Hill his one job for the day was to make sure our host, Mark Mitchell, didn’t go full-send party mode before we arrive.

Not his fault as Mark is a legendary party animal. Mark loud talks our whole group as he fills his Yeti tumbler with a handle of Buffalo Trace bourbon. He “goes to sleep” shortly thereafter but not before passing the torch to John who tries unsuccessfully to keep the party going.

We all go to bed.

I get blamed for snoring.

We wake up at 6:15 and drop Mark’s 25’ Pathfinder boat in the water behind his house. We load up the gear and meet local conch, Sean O’Donnell, who has some dive spots he wants to take us to. We leave the dock, and everyone enjoys a breakfast beer. Don drinks coffee and shakes his head at our crew. Thirty minutes later, Don, Sean, and I are in the water diving. Don and Sean are the breath-hold experts of the group, so they quickly grab a pile of lobsters. I grab what I can between filming with the GoPro. We hit several spots between beers and our group manages 36 lobsters for the day. We’re six shy of a limit for our boat but we call it a success and return to Mark’s dock. To my amazement and disbelief, Mark is behaving himself and he cooks a beef tenderloin in the oven while I cook 12 lobster tails on the grill. We feast and then enjoy many more beers with “Cheers Buggers!” being shouted by someone every 10 minutes. Pat seems to really be unwinding and we all agree he’s an amazing addition to our group. We go to bed, and I get blamed for snoring again.

We wake up at 6:15 and Don drives us to Brian Cone’s house to load up on his 34’ Freeman. We get the boat loaded with the gear and enjoy breakfast beers. Don does not bother with shaking his head by this point. We head a few miles into the ocean and bail out. We’re in deeper water this time but Don and Sean start cleaning up again. The water is much clearer, and we all manage to grab quite a few lobsters. Don swims back to the boat and he tells John Hill he’s never seen someone drink so many beers before noon. John proudly explains that a person can’t say they drank beer all day if they don’t get started early in the morning. Mark takes a chug of Wild Turkey from the bottle and gobbles at Don. Pat seems to be learning a lot about life from John as we go from spot to spot. We end up with another great haul but, again, we’re a few shy of the limit. We head back to the dock knowing that we still have enough lobster for everyone to take a bag home to their families. I’ve been catching up to John on beers by this point, so Don drives us back to Mark’s house. Don loads up his SUV and heads home to spend time with his kids.

With our chaperone gone, we crank up the music and begin to upset the neighbors. We begin preparations to secede from the homeowner’s association. Brian brings his family by to fry lobster and Mark drunkenly pulls off a miracle by making the best prime rib any of us has ever had. The partying goes to level 11 before we all go to bed.

It’s discovered that Gary Turner has been the snorer all along.