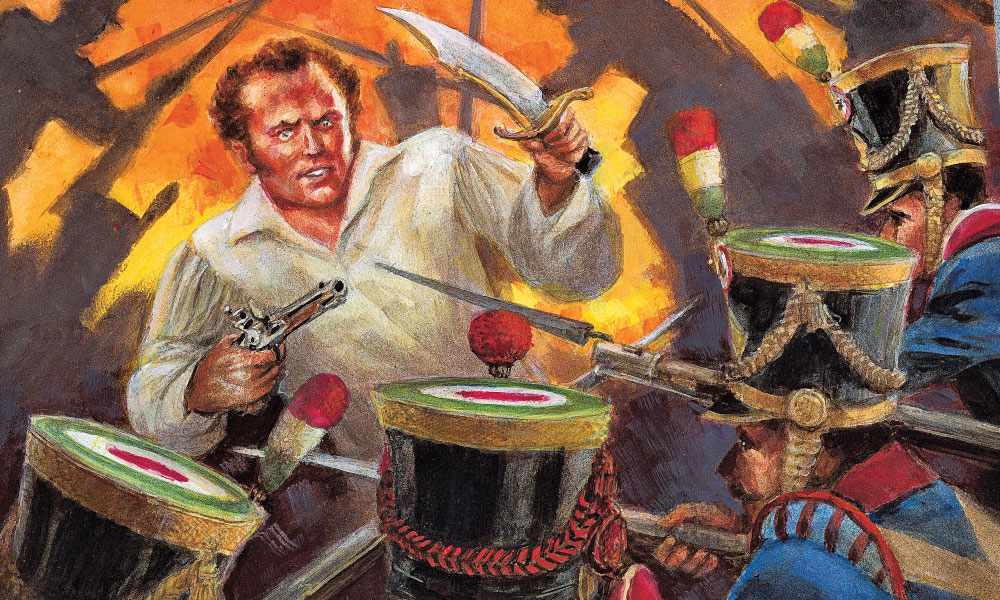 After a friendly duel went sour, Jim Bowie used his oversized knife to kill the sheriff in attendance then cut the arm off another man.

Society was so impressed that they named the big ass knife Bowie used on the sheriff after Bowie himself.

James “Jim” Bowie was born in Logan Country, Kentucky on March 10, 1796. He was the ninth of ten children born to Reason Bowie, a veteran wounded in the American Revolution, and Elve Ap-Catesby Jones Bowie, a gal with about three names too many that nursed Reason back to health. The family moved to what eventually became Missouri in 1800 before settling in Bushley Bayou in Spanish Louisiana in 1802. The family moved yet again in 1809, this time to Bayou Teche, Louisiana before finally settling in Opelousas, Louisiana in 1812 where they ran their farm and plantation.

Jim flourished in the wilds of Louisiana. He hunted, fished, became an expert with the rifle, pistol, and over-sized knife. He learned how to rope and wrestle alligators– a skill that always looks good on a resume. Jim answered Andrew Jackson’s call for volunteers to fight off the British in the War of 1812 by enlisting in the Louisiana militia in…1814. Given that he was two years late to the party, Jim saw no action.

Still itching for a fight though, Jim joined the Long Expedition which sought to liberate Texas from Spanish rule in 1819. The expedition captured Nacogdoches and declared Texas an independent nation. Jim returned to Louisiana before the expedition and its invasion of Texas was quashed by Spanish forces.

Jim Bowie entered into the annals of history – and dare I say historic immortality – on September 19, 1827 when he was either a supporter of or second to Samuel Levi Wells, III, depending on the account given, in what has become known as the Sandbar Fight. What started as a good ol’ fashioned duel on a sandbar north of Natchez, Mississippi on the Mississippi River between Wells and Dr. Thomas Maddox ended in a straight-up brawl when neither party’s bullets hit home.

During the 17-man melee that followed, Jim was shot in the hip and knocked to the ground by a man named Colonel Robert A. Crain. Jim got to his feet, pulled his larger than life knife, and charged his attacker. Crain responded by slamming Jim upside the head with his now empty pistol. Jim collapsed to his knees at the blow. A man named Major Norris Wright shot at Jim but missed.

Undeterred, Wright pulled his sword cane and thrust it into Jim’s chest. The blade was too thin however and was deflected by Jim’s sternum. Wright fought to free his blade from Jim’s flesh but was killed during the effort when Jim grabbed Wright’s shirt and pulled the sword cane-wielding dandy down upon his knife. Jim was then shot and stabbed again by an unknown person in the group.

Now royally pissed off, Jim Bowie stood to only see brothers Alfred and Carey Blanchard holding pistols on him. Both men shot but only one bullet hit Jim. Jim lunged forward and relieved Alfred of his lower arm with his massive knife. Carey reloaded and fired at Jim once more but missed.

The 90-second fight left Jim with, depending on the account, two bullet wounds and seven stab wounds or three bullet wounds and four stab wounds. Regardless of the account, all in attendance agreed that there was no way in hell Jim would survive his injuries. Jim proved everyone wrong by living to fight another day and the nationwide coverage of the brawl made him a hero and representative of the ideal frontier man.

But Jim Bowie’s life of adventure was just getting started.