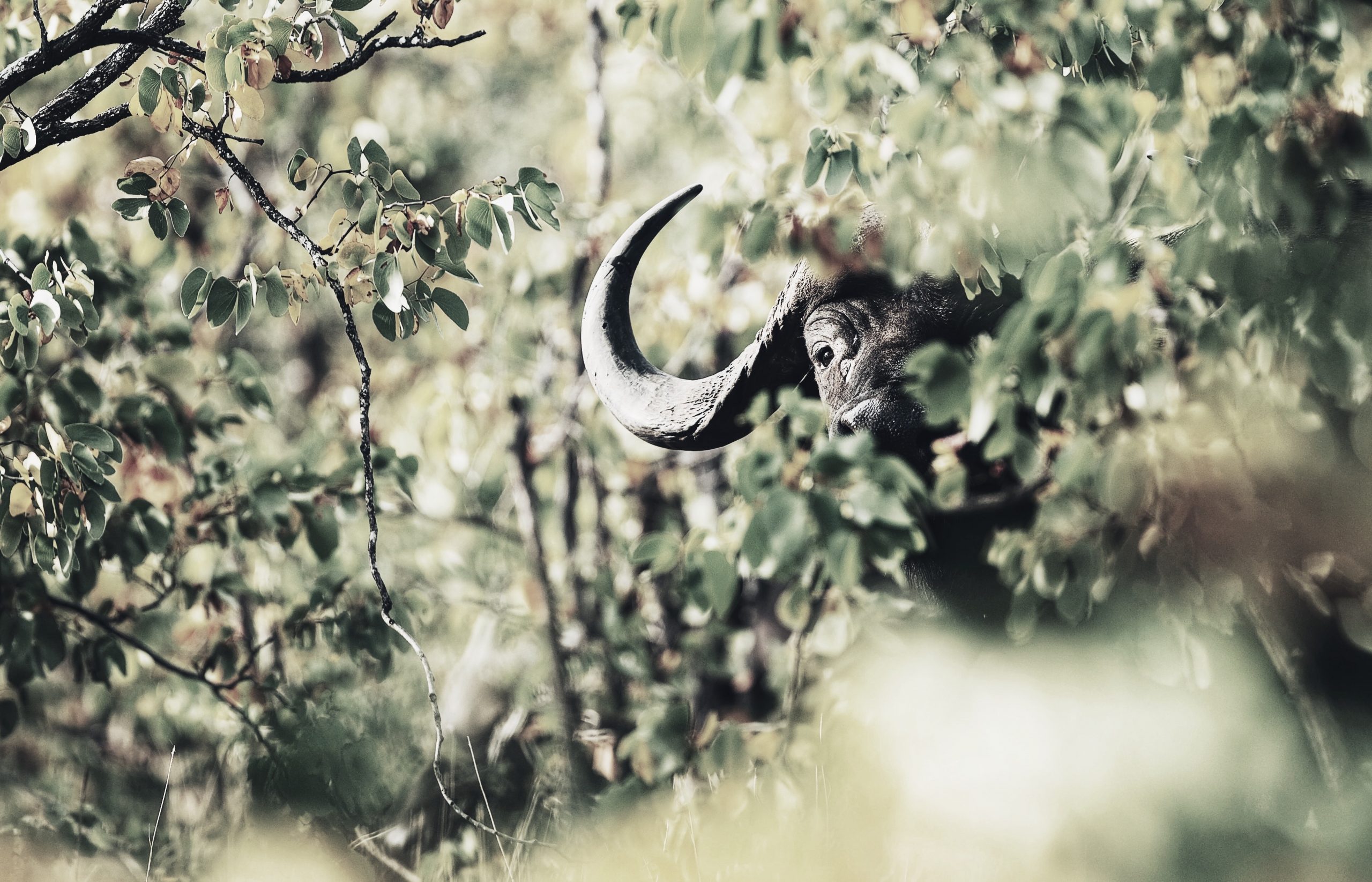 “Jess” is a catch-all phrase for thick, dry, prickly, near-impenetrable gray thornbush, found in low country across southern Africa, but nowhere more common—or infamous—than in the broad, hot, thick Zambezi Valley. We track elephant in it; 15 yards is a long shot. We track buffalo through it, but it’s usually too thick to shoot. We hope to catch them along the edges, or crossing a sand river. Wherever we close, we try to shoot well, because a wounded bull will instinctively head for the nastiest jess it can find. But, even with the best intentions, not all shots are perfect.

This shot was far from perfect.

The bull walked along a korongo, grassy with scattered bushes. He was between bushes, not 40 yards, and I thought the .416 was steady on his shoulder when the trigger broke. At first, you’re always tracking a dead buffalo. Even if the instant replay isn’t perfect, there’s hope. You never know, so the follow-up begins with optimistic caution. The spoor led us quickly to a shallow river, out of our area and into Chete. We had to back off and go to the game guard station and pick up a game scout. Much daylight lost, but maybe the delay was a good thing, because watery blood suggested a poor hit, too far back.

Back on the track in the last hour of daylight, we jumped the buffalo just up from the riverbank, too thick for a shot. Now we knew for certain he was not dead…hours after the shot. We followed for a bit, straight into a huge expanse of jess, and then we lost the light.

It does no good to toss and turn all night, but it’s unavoidable. You rewind the tape countless times, sick for the buffalo, angry at yourself, wondering how you screwed up. Somewhere in the wee hours this pointless exercise subsides, and icy fingers of fear creep in. You’ve seen the jess; you know the buffalo is in there.

We took the track at first light, for me the time when fear is the worst, palms sweating despite the morning cool. I was with Rory Muil, he with his .458. Russ Broom offered me his double .500; I took it gratefully.

The track led us endlessly through the gray thorn, sometimes through scattered openings, where we had a chance. Mostly through stuff too thick for any warning. The trackers, of course, are the courageous ones, doing this unarmed, for little money, because it’s what they do. Hours passed, the rifle heavy, palms constantly wet, more sweat now staining our shirts.

You try to pierce the ominous gray mass, looking for a patch of black that isn’t shadow, a bit of shine that’s probably a ray of sunlight on gray bark…but might be horn. At first you dread the charge, but as the hours pass you hope for it, bring it on and get this over with!

All of us have read too much Capstick and seen too much Mark Sullivan. Charges do occur, but they are rare. The most common outcome of a poorly shot buffalo? That buffalo is never seen again, gone forever. Now five hours into the jess, this was most likely, but Rory’s trackers held the track well. They lost it frequently, giving much-needed standing breaks while they relocated. For a spoor a full day old, it was fairly clear…and led us on. The bull had chosen his ground and was up there ahead of us, in pain and righteous anger, waiting.

The pace was slow and cautious, distance covered nothing to the time expended. We were lucky with the wind that morning; it stayed constant, and the bull moved steadily into it. Inevitably, as morning turned to midday and the heat rose, the breeze became unstable. Timing is everything and luck is more. Perhaps he heard us, more likely a stray eddy, but we caught him in a rare open patch, circling to pinpoint our scent. Whether he was preparing to charge cannot be known. I shot him on the turn with the big .500, ending a very long morning in the jess.