I’m Sure You Wanted a Better Photo… 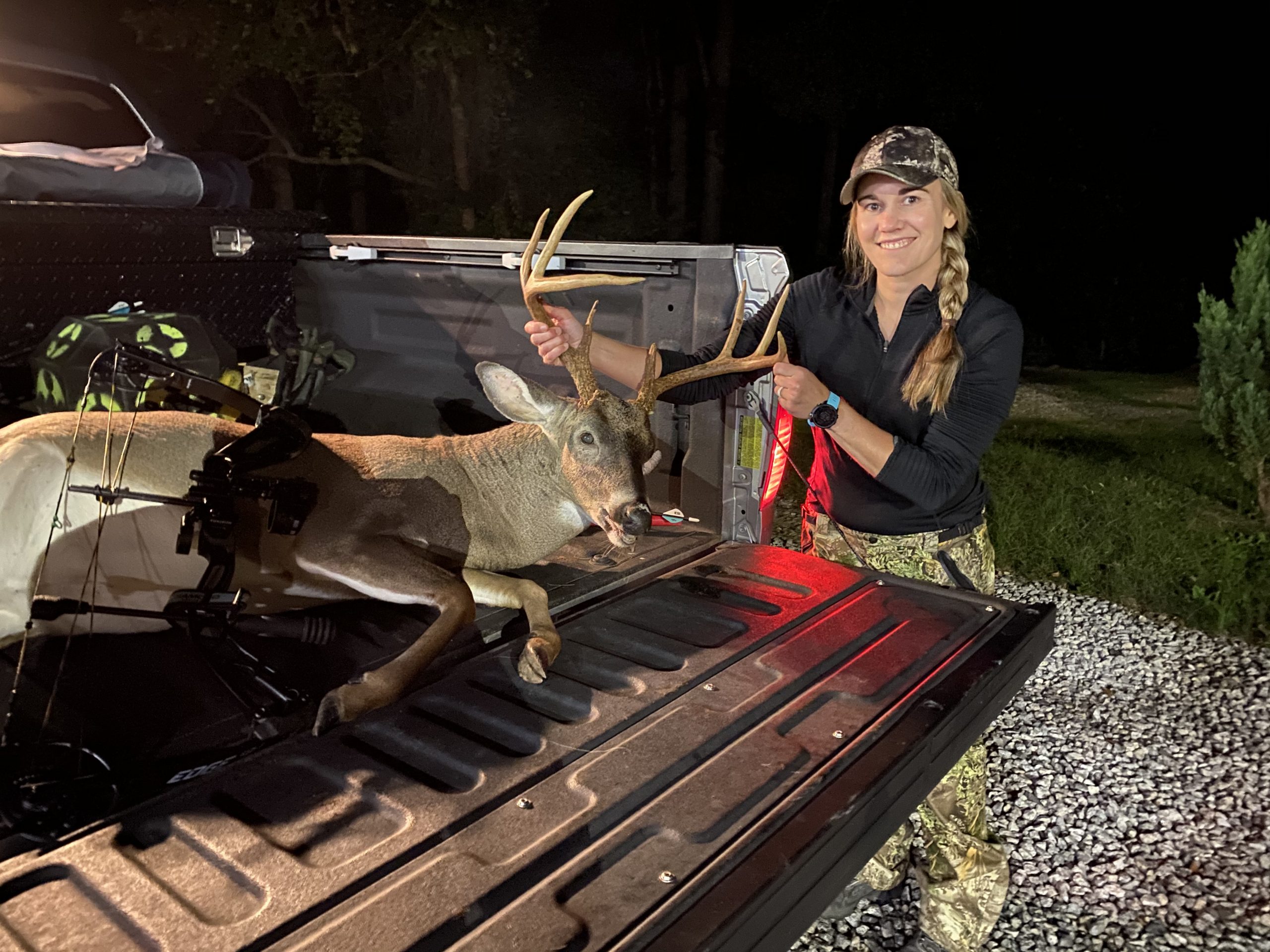 As an outdoor communicator, I daydream of taking photos of big bucks and limits of ducks. When a season ends, I look back at my photos and make a list of what to do better. We are immersed in great photography thanks to social media, but I always want to know the story behind the photo. How was the shot set up? What led up to the shot? Did everything go as planned?

My wife, Corey, is a bowhunter and hunts harder than anyone else I know. She is comfortable climbing trees in the dark and taking the kids fishing. The outdoors isn’t something she does to make me happy. It’s part of her DNA. Some of our babysitters are confused when she answers the door in camouflage and tells the sitter we should be back an hour after sunset.

I dreamed of the day she would shoot a mature buck and the photos I wanted to take. Many posts I’ll see of women with a big whitetail seem unrealistic. The hunter is all “done up” with makeup and look more ready to go on a date rather than spending seven hours in a tree stand and following a blood trail through thick undergrowth for ninety minutes.

I always wondered how Corey’s first archery buck would play out. Every time she left for the property I waited with anticipation, and the kids.

The fateful moment happened at sunset on a perfect October Saturday. I checked my phone every few minutes with the hope that Corey would text that she took a shot. An hour earlier, a group of does blew at her and seemed to alert the whole property that a chick with a braid was hanging out in a tree.

I tried to be encouraging through texts, but I thought she would be coming home empty handed. I had already eyed my bourbon glass and noticed it looked lonely. It would have to wait a few more minutes until the kids were in bed and my wife was out of the stand. As I was cleaning up chicken nuggets and playing Battleship, the text came through. “I took a shot…He was big.”

In half an hour, I had our two kids with headlamps at the base of the tree ready to trail Momma’s big buck. The ride to the property was filled with more instruction than a six- and eight-year-old can handle. Be quiet, don’t walk in front of us, and stay near mom and dad.

We found good blood right away, but it disappeared within a few yards. Our kids are used to tracking rifle shot deer. They were confused at why we hadn’t found the deer yet. Twenty minutes later, we find more blood. It takes another twenty minutes to find the next spot of blood and spirits started to dip in our tracking party.

In an all-star parenting move, we had the kids wait at “last blood” while we went and searched for any more clues. I turned around a few minutes after we left the kids and looked back to see them hugging each other in the cold pitch black with a flashlight that does little to break through the thick darkness.

“Uh, Mom…Dad…it’s getting kind of creepy out here.” My eight-year-old observes. My six-year-old starts to whimper and I realized we were at the wall all parents know and fear.

My wife and I took turns standing with the kids as the other searched further still for any sign of the buck. Dad jokes only help a little when faced with darkness, no snacks, and two hours past normal bedtime.

Then, the tell-tale shine of a whitetail’s antlers on the forest floor illuminated by Corey’s headlamp brought a welcome end to the search. My son’s spirits quickly improved while my daughter started to cry. Not because of the deer, but because she’s tired and wants to go to bed.

We quickly load the buck into the truck and start to head home. Before we leave, I slam on the brakes and think, “We didn’t even get a picture!”

All those hours I planned this shot were a waste. I flipped down the tailgate, had my wife display her trophy, and we were back in the truck before the hurricane of kid emotions went to Category Four.

I’m sure you wanted a better photo of this buck. I could have brought my wife’s makeup kit from home or maybe even staged the shot in the woods with Corey holding the antlers as far from her body to make it look bigger. Maybe I should have had the kids use their headlights to make the lighting dramatic and told them, “Suck it up kiddos, don’t you know it’s all about being Insta-famous.”

As much as we try to capture the feelings of a hunt in a photo, manufacturing something that’s not there is a lie. This photo had plenty of issues.  The barn floodlights washed out the buck. The taillights of the truck. The archery target. The bow in the shadows. Corey trying to smile after a seven-hour rollercoaster of emotions and no food.

I’m sure you wanted a better photo. But I can’t think of a better photo to remember what it’s like for young families to hunt with all its ups and downs.