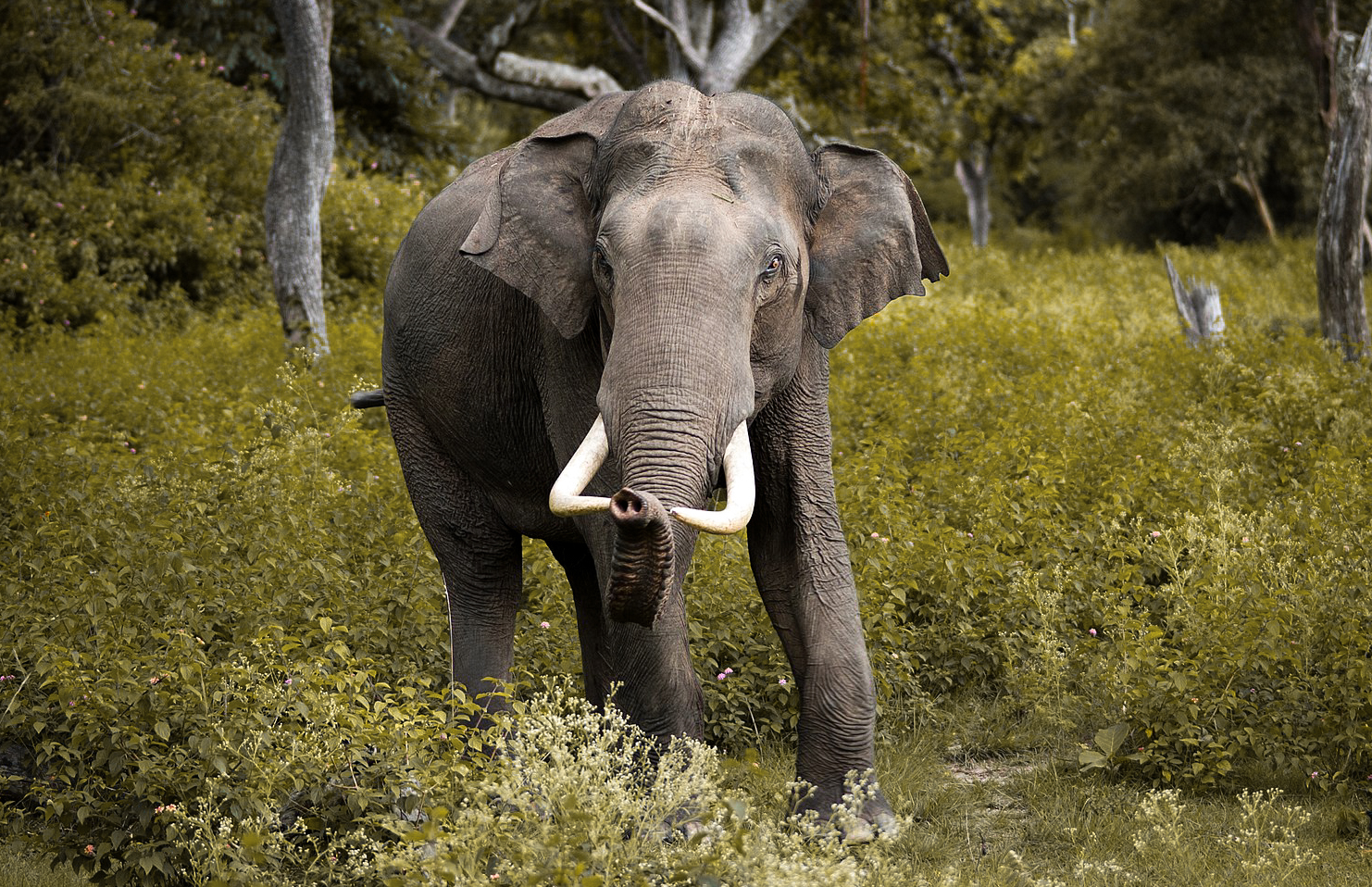 Lieutenant David Wedderburn was given the task of killing the rogue. As the best shot in the 37th Native Infantry and having successfully hunted countless elephants before, Wedderburn felt confident that eliminating the bull would be a matter of ease. This sense of hubris would be his downfall.

Accompanied by Oocha, his well-seasoned tracker and gunbearer, Wedderburn took to the jungle armed only with experience and his Purdey express double rifle. The swath of destruction left by the lumbering behemoth was easy to follow, and it wasn’t long before the men had maneuvered to within shooting range of the animal so feared by local villagers. Studying the animal as Wedderburn prepared to fire, a great sense of unease washed over Oocha. Mucknahs were almost always trouble, and this one was enormous.

Well known for their extraordinary strength and overly aggressive nature, mucknahs were thought to be so endowed because of their lack of tusks. They were also believed to be larger and taller than other elephants, and their trunks considerably longer and more muscled. These traits, combined with their volatile disposition and lack of fear of man, made for an extremely dangerous animal.

Wedderburn maneuvered through the thick underbrush and into firing position. In one swift, almost fluid motion, he stepped from behind a tree, drew a bead on the massive bull’s forehead, and fired both barrels almost simultaneously. The bull collapsed forward at the impact, his bulk and the force behind it sending explosions of sodden jungle growth and soil into the air. Oocha stepped forward and quickly exchanged rifles with Wedderburn, replacing the Purdey with a Westley Richards two-ounce smoothbore rifle. No sooner had the rifles exchanged hands than the bull began to rise, his collapsing apparently the result of only being stunned. Wedderburn fired once more, placing his third shot almost on top of his previous two. The bull fell again, crashing to the ground with the weight of a mountain.

Certain the rogue was now dead, Wedderburn moved closer inspect to his prize. Without warning, the mucknah released an ear shattering scream and charged forward with such speed that Wedderburn was knocked from his feet before he could shoot again. The enraged bull pulled Wedderburn from the ground with his tightly muscled trunk. Wedderburn struggled and twisted to free himself but to no avail. The elephant’s grip crushed his appendages like a hollow egg. In a vain attempt to free himself, Wedderburn fired his rifle, hoping to hit the animal in the head. Instead, the bullet passed through the animal’s ear just to the side of its skull. Further aggravated, the elephant slammed Wedderburn to the ground, breaking several of the hunter’s bones.

Oocha stepped forward and fired both barrels into the side of the pachyderm with no visible affect. Blinded by rage and fueled by adrenaline, the goliath barely registered the shots, choosing instead to concentrate its attention on Wedderburn. Oocha watched in horror as the rogue held Wedderburn to the ground with its trunk as it repeatedly crushed him under his feet and knees. Several minutes later, the bull threw Wedderburn’s nearly liquefied body aside and fled into the jungle.

Stories of elephant hunts gone badly are quite numerous in the annals of African hunting history. Without a doubt, hunting the largest land animal in some of the most inhospitable places on earth is a dangerous endeavor. One mistake can lead to death or maiming. But while most connoisseurs of sporting literature are familiar with the trials and tribulations of hunting the African elephant, few are aware that the same dangers occurred when pursuing the Asian variety. As Wedderburn’s disastrous hunt in India in 1853 proved, the Asian elephant can be just as dangerous as its African cousin.

The misconception that Indian elephants provided a less than stellar hunt probably stems from the fact that so many of them used have been domesticated. While it is true that a vast number of Asian elephants were used for transportation, forestry, and ceremonial purposes during the time that they were legally allowed to be hunted, the majority of the animals remained in the wild, free of man’s domestication. For those who were daring enough to enter the tropical forests of India, Ceylon, and Indochina in search of them, Asian elephants offered a thrilling hunt. This danger was increased exponentially when the hunting was conducted in the darkness of night.

While not his preferred method of hunting, P.D. Stracey took many elephants by moonlight before his retirement from India’s forestry service in 1947. In fact, the largest tusker of his career took place in the hours long before dawn.

Stracey was hunting in his home district of Goalpara when villagers first brought him news of a tremendous elephant that was destroying the community’s rice paddies. After listening to the details of the animal’s habits and mannerisms, Stracey agreed to hunt what would come to be known as the “Gangia Tusker.”

It was a still November evening. Stracey sat at the transition between jungle and paddy, waiting in the damp of night for the elusive crop-raider to show. He didn’t have to wait long.  Exiting the jungle with the stealth of a snake, the giant made his way into the paddy to feed. In the full moon, only the animal’s gleaming white tusks were visible, and soon even they disappeared as the clouds above floated before the moon. No longer able to see his quarry, Stracey was forced to stalk the elephant by sound only. Each time the animal pulled a plant from the mud to eat, Stracey edged toward the noise. The going was tediously slow given the elephant’s sporadic feeding and the paddy’s kneedeep water. Soon, Stracey was soaked to the waist and his legs a living carpet of leeches. Estimating he was to within one hundred yards of the rogue, Stracey readied his rifle and flashlight.

A sudden shift in the clouds brought the enormous tusker into view. Stracey raised his rifle and flashlight just as the bull’s trunk reached skyward, seeking to smell the stranger before him. The air reverbiated with a thunderous scream as the elephant turned to flee. Stracey aimed just behind the animal’s left temple and fired twice. The elephant continued steamrolling toward the jungle, oblivious to the shots that had just befallen him. Stracey fired once more at the rushing target before it disappeared into the darkness of forest.

Stracey found the animal less than a mile from the paddy at first light the next morning. Despite having a broken shoulder, the tusker wasted no time in charging at the sight of his attacker. After two quick brain shots, the elephant fell for the last time. The bull was truly enormous, standing nearly eleven feet at the shoulder and having tusks measuring slightly over seven feet long and weighing seventy-seven pounds each.

Of course, not all Asian elephants were rogues or crop raiders. Most, in fact, lived oblivious to man deep in the jungle. Hunters who took to the jungle in search of them often had to trek for days upon days to find fresh spoor. The extreme difficulties of this method of hunting was put into song by Richard L. Sutton who, along with his friend Leonard “The Judge” Waddell, hunted numerous elephants in Annam (modern day Vietnam) during the 1920s.

For a man who is anxious to do his best,
An elephant trail is the supreme test.
You rise from your slumber ere break of day,
And the first gleam of light finds you on your way.
Spoor at last!  And your spirits rise,
But you quickly are due for a sad surprise.
When your guide informs you, in accents cold,
That the tracks that excite you are four days old.
So you toddle along in the tropical heat,
With throbbing temples and aching feet,
Trying to put up a manly fight,
And hugging both courage and canteen tight.
But all things earthly must end, without fail,
Even an endless elephant trail;
Though you swear Lady Luck is a heartless vamp,
When you crack your old tusker a mile from camp!

While both men were familiar enough with the trials and tribulations of elephant hunting to pen a camp song about them, they also had their share of luck. The best example of the Judge’s brush with good fortune came when he was afield after other game. He was following a narrow jungle trail sided by palmettos and other medium-sized brush when he noticed movement at a wide point on the trail some two hundred yards ahead. Carefully easing forward, he spotted a small band of four elephants, one of them a rather large bull. Although his hunting companions said the distance was too far for open sights, the Judge assured them he could make the shot.

With direct confidence, the Judge raised his .450-.400 double Jeffrey and fired. At the impact of the 400-grain nickel-jacketed bullet, the elephant collapsed into the brush never to move again. It was the perfect side shot and at a measured distance of one hundred forty yards, one that the Judge never let his friends forget.

Unfortunately, like the hunters that took after them during the nineteenth and early twentieth century, the days of hunting Asian elephants are long gone. Today, all four subspecies of Asian elephant (Indian, Sri Lankan, Sumatran and Borneo) are critically endangered due to loss of habitat, making hunts such as the one that took Wedderburn’s life all but history.