Hanging On By a Thread 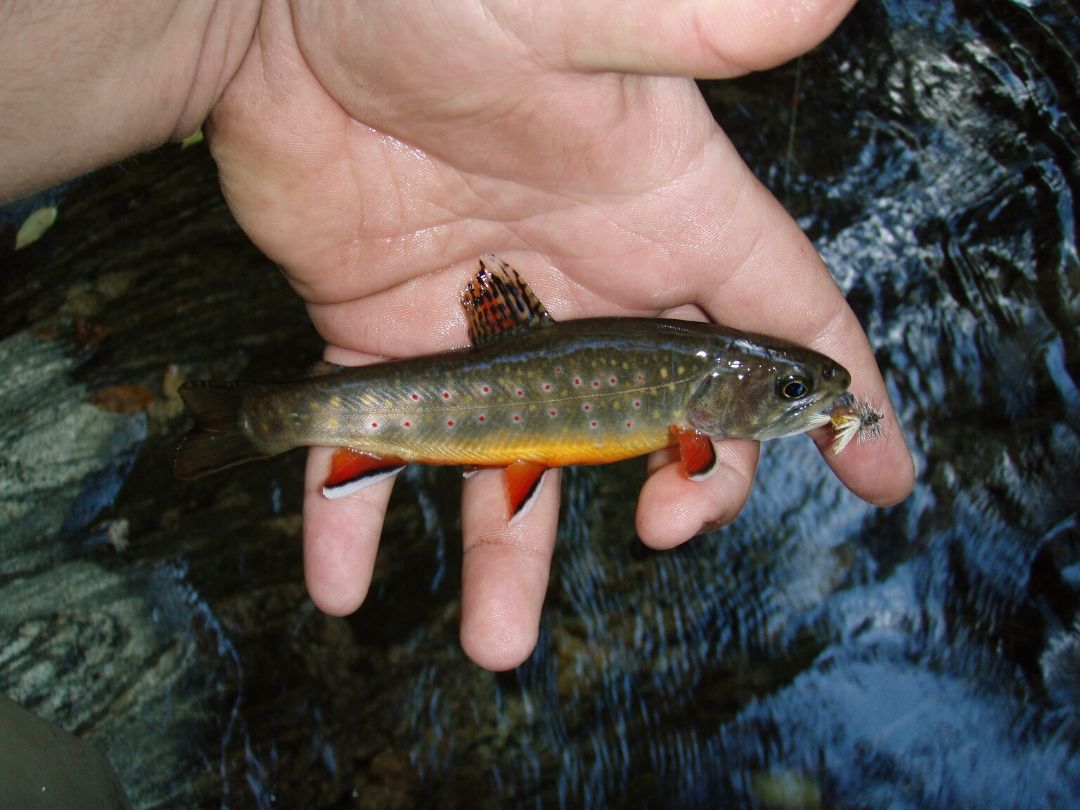 I reached my chosen stretch of backcountry stream for the day just as the sun was starting its descent. This half a billion years old run of water is where brook trout or “specs,” as they are known locally, are found. I approached the first pool and made a cast with my fly rod. I was rewarded to see the white, black, and red fins of a Southern Appalachian Brook Trout rise from the rocks below to my fly. A short, but fierce battle ensued, and I brought one of the most beautiful fish in the world to hand.

An eight-inch brook trout might not put up much of a fight, even on a one-weight fly rod, but the species more than makes up for this lack with its beauty and tenacity. Their backs are dark olive, intertwined with olive worm-like markings known as vermiculations. Brook trout flanks are an amalgamation of deep blue purple parr marks, olive, yellow, and cream. When they spawn in the fall, the cream underside gives way to orange or red. On top of these colors are speckles, or specs, from which their mountain name comes. Some of these markings are yellow and green, while the most noticeable are brilliant red spots encircled by pale blue halos.

Salvelinus Fontinalis, the scientific name for brook trout, translated loosely means “char of the frontier.” When you hook a brook trout, a connection is made to the origins of fishing in America. The first Europeans to arrive in New England ate them. There were so many, these settlers first caught them with nets, then utilized rod and line. The species inspired the first fishing clubs and the first conservation laws in New England. Brook trout range from the Hudson Bay in the north, to the southern headwaters of the Chattahoochee River in Georgia, and west across the upper Midwest. The southern portion of the Appalachian Mountains is home to a unique subspecies known as Southern Appalachian Brook Trout. From the New River drainage in southern Virginia south to Georgia, they differ slightly in appearance from their northern cousins, but their colors and markings are unique to the region. It is believed brook trout traveled down the east coast from northern waters during the last glacial epoch. This allowed them to access the rivers and streams along the way including the Tennessee and Savannah River Basins.

If it weren’t for climate change, we wouldn’t have Southern Appalachian Brook Trout. The glaciers receded and the trout moved upstream, higher and higher, following the cold, clean water they needed to survive. Over time, the species became prisoners in their home waters and soon began to evolve separately from their northern brethren. These relic populations were safe until Europeans arrived and extensive logging began. With the mild climate, logging could be done year-round. Entire mountains were stripped of their timber, down to the creek banks. With no riparian cover and around eighty-five inches of rain annually, the streams were soon choked with silt from massive erosion. This made the water too warm and covered the species’ spawning habitat; all that was left was the high-gradient streams where the water and habitat was suitable. These practices continued for nearly a century.

Some logging companies, local agencies, private clubs, and citizens stocked rainbow, brown, and northern brook trout to replace the depleted native stocks. The rainbows compete for space and food with native brook trout. Brown trout compete for food, space, and also eat smaller brook trout. The ones they don’t out-compete or eat, they spawn with and produce sterile hybrids called tiger trout. This hybridization is extremely rare in the wild. The northern brook trout hybridize with the native southern brook trout, further diluting the relic populations.

Progress was made at a glacial pace, when the Great Smoky Mountains National Parks established in 1934. After the park was formed, studies were done of the streams in the park and it was found that there were differences between the little native specs and the stocked brook trout, just as the local mountaineers had said for years. There was a push to list Southern Appalachian Brook Trout under the Endangered Species Act but this didn’t occur as the scientific data was inconclusive at the time. The park’s studies found that out of a thousand miles of trout streams, roughly one hundred-twenty miles held Southern Appalachian Brook Trout. The park closed hundreds of miles of stream to fishing to remove invasive species and re-introduce native brook trout. There were some failures and some successes, but progress was made, and native specs swim in streams now that haven’t held a native in one hundred years. Reintroduction programs are under way across the historic range of Southern Appalachian Brook Trout. The species still face threats from acid rain to climate change today but are tenaciously hanging on despite the burden placed on them by humans.

The first trout I caught that morning on a dry fly was not the only trout I caught that day. Honestly, I lost count after twenty or so. It doesn’t matter. I go not to keep tally or record length, but to be in a place that is relatively unspoiled given the history of the region. The land is slowly healing. The water is cleaner now than when I first started fly fishing for brook trout and wildlife is abundant. I thank God the fish are there because the angling world would be a little less bright without them. Their remarkable beauty and the places they are found remind me why I fish for the only char native to the eastern U.S.

– If these fish do not inspire you, it’s not too late to get a tee time or catch a game.

They Keep the Place Dancing