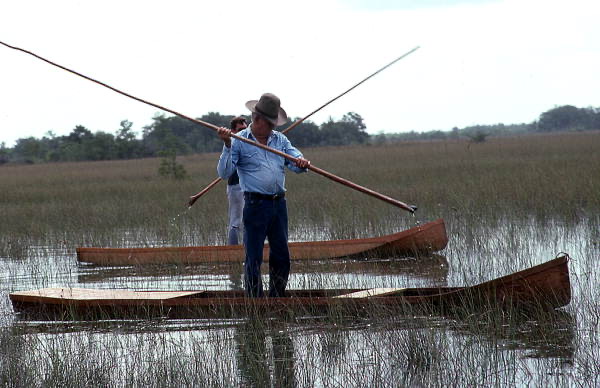 Americans love cowboys. Our collective imagination is whipped into a frenzy by lonesome, gun-swinging riders struggling to master a vast lawless West. What you might not realize, however, is that we have a second great frontier; Florida’s Everglades.

Gladesmen are the cowboys of this sawgrass expanse, traversing the glades in airboats and swamp buggies like their Western counterparts did via horse and wagon.

Make no mistake, the Everglades is one of the toughest environments out there. Crushed under the relentless Florida sun, this endless swamp labyrinth is home to alligators, snakes, and outlaws. Not a place for those with a weak spirit, or sense of direction.

The Galdesmen live a life not that different from when their culture began 150 years ago. They’re some of the first Floridians, men who tamed the state before your grandma retired there.

Their official club house sits off Loop Road in Big Cypress Park pretty much equidistant between Naples and Miami. New members are expected to show up early and often for hunts, property cleaning and socials. Once a year the Gladesmen open their doors to outsiders’ via a big old-fashioned hog roast.

A 2011 Government report on Cracker culture pretty much sums it up, “their rural values have been said to include wasteful hospitality, reckless indulgence in food and drink, a touchy and romantic sense of honor, and a strong tendency toward lawlessness.”

If that’s wrong, I don’t wanna be right.

But these cowboys of the ‘Glades are more than just good BBQ hosts, they serve an important purpose in the local ecosystem. Next time you’re at a cocktail party and someone questions why hunting is good for the environment, bring up the case of the Gladesmen and the Burmese python.

Brought in as pets, this almost biblically demonic species, which can grow up to 20 feet in length and weigh 200 pounds, escaped and has taken over. A 2012 study showed the population of raccoons and opossums dropped by 99 percent, while the famed Florida bobcat dropped 87 percent. To counter, the Gladesmen did what they do best: They went hunting.

The highlight has been the Florida Python Challenge. The 10-day swamp rodeo was inaugurated by Governor DeSantis and has a top prize of $10,000. No firearms are allowed, and the snake must be caught by hand. Easier said than done; grab it wrong and the serpent will spin around your body with crushing force, gripping you with the microscopic razor teeth lining its jaw. At the end of the 10 days usually around 450 snakes have been removed.

While they’re stewards of the environment, the Gladesmen lifestyle is under threat. Originally Gladesmen used skiffs, but they are known for the airboat. A 1989 plan to ban these boats– other than by four government approved contractors–is being implemented.

The plan will grandfather in those who can prove they were at least 16 years old and active air boaters as of 1989. It must be bitter sweet for the G-men, knowing that while they can enjoy these boats a while longer they won’t be able to pass the tradition on to their children.

Most modern Gladesmen have a normal life, selling cars, fixing roofs, and pushing paper in an office, but their home is the Everglades. While it lacks the majesty of the Rockies or elegant minimalism of the desert, the Gladesmen know that this environment has its own seductive wild charm.