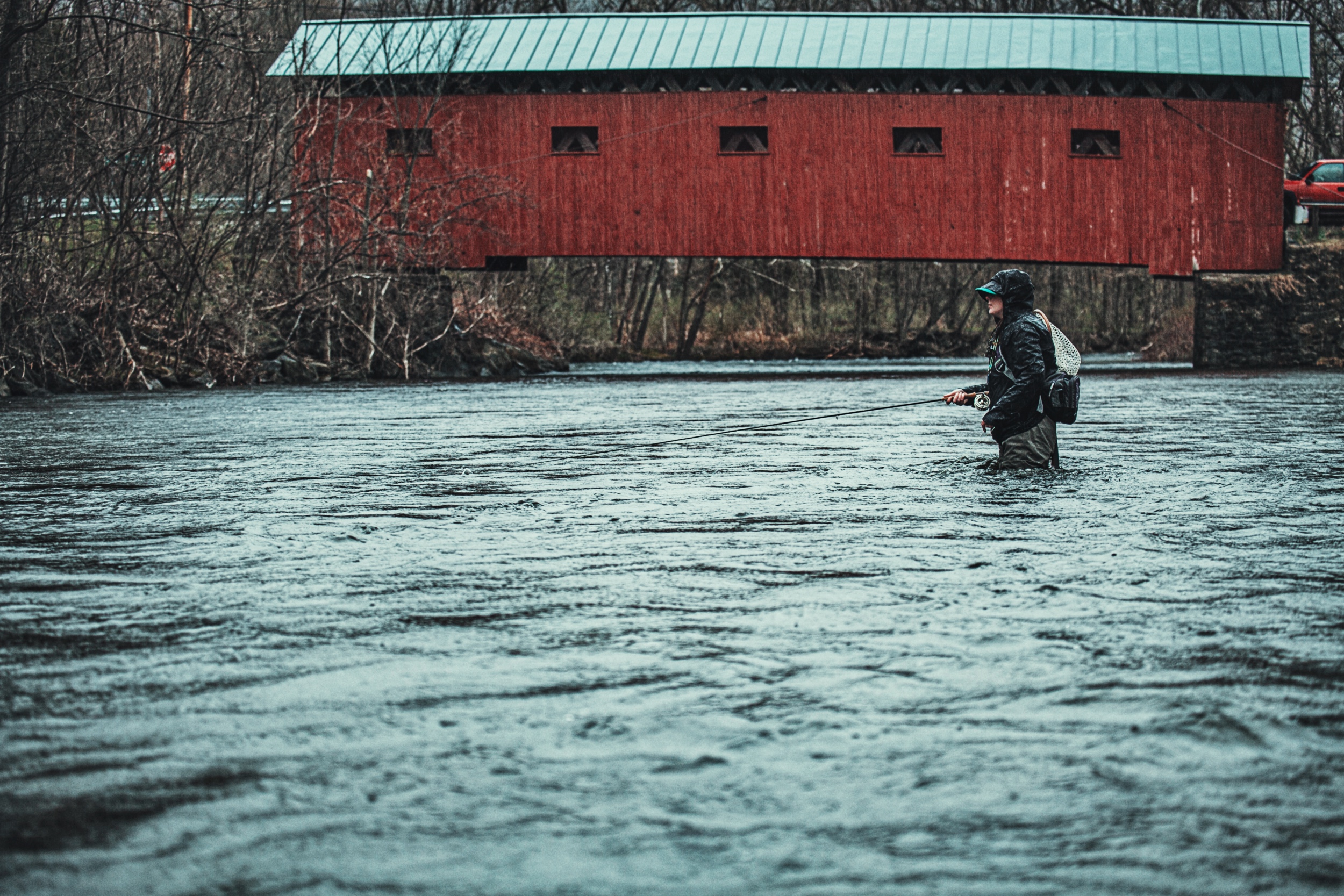 It was April, or so the calendar said. The white-gray wash of the Vermont winter had melted away, unveiling what locals called “stick season.” Back home in Montana we just called it mud season.

The chatter that had pervaded the drive to the Battenkill was now hushed, replaced by the sound of rushing water as it passed under the old covered bridge. But I really didn’t care what month it was. Ducked under the hatch of my friend Callie’s car to avoid the drizzle, stress faded away. Come hell or high water, we were going to fish.

We walked mutely through the mud and muck of what would be a hay field in high summer, then sloshed our way to the turbid waters of this famed Eastern trout stream. We waded warily, buffeting by strong winds that picked up mist from the water and layered it onto our faces in an icy mask for which, in some spa somewhere, women pay hundreds of dollars. There’s a glorious imperviousness when you’re swathed in waders and a good jacket, hood up against the elements, content in being miserable.

Surrounded by roaring wind and swift water both around our legs and falling from the gray skies above, we swung for trout. The earth melded into an amalgamation of liquid and air and the steady rhythm of the cast. The rain changed to sleet. We changed flies. Blew on red, numb fingers. Tried to bury cold noses in the folds of our wet Buffs.

After a few hours we looked at each other, unable to hear spoken words over the wind, and came to a mutual decision. We reeled in, carefully wading through the tumbling waters to the relative safety of the shore. I was shivering hard. We were tired, cold, and couldn’t feel our shriveled fingers.

We made it back to her SUV, only to find a plastic baggie with a piece of paper inside slipped under the wiper. Frowning, Callie plucked it from the windshield and pulled the paper out. Five badly-scribbled words lined the back of a gas station receipt:

We exchanged a look, threw our rods into the car then climbed in, wet waders and all. My Glock suddenly rested a bit heavier against my chest inside my old Simms G3s. No other cars were in the vicinity, but suddenly we weren’t in the mood to linger.

Half an hour later, sitting in the local pizzeria with wet hair and red faces, still clad in wading fleece and soaked jackets, we could finally laugh about it as we drew up a profile of our watcher. Probably sub-five foot six. Ratty clothes. Overgrown beard. Lives either in his parent’s basement or a cabin in the backwoods. Clearly needs a job, an arrest, or a blow to the head. Maybe all three. We toasted and laughed, shrugging it off.

Until two weeks later. There was a news story that police had arrested a pants-less man at that same bridge. He was 5’5”, lived in his mom’s basement in Rutland, and didn’t believe in underwear.

Dammit. We’d missed the fish … and a free show.