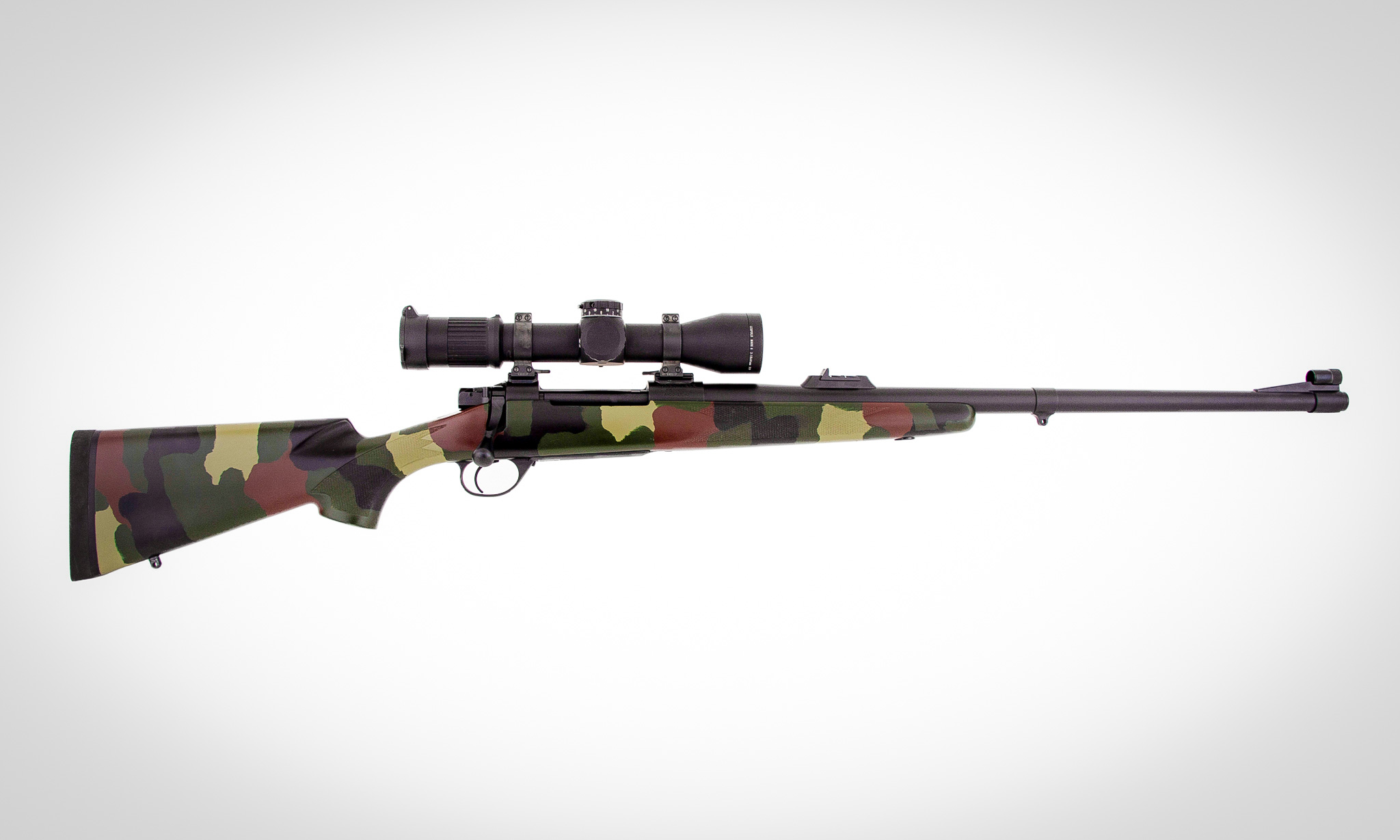 There’s a question I’m asked all the time. Once per week on Instagram at least. Once per month by a friend or acquaintance. Once per year by someone who really knows their shit.

“If you could only hunt with one rifle for the rest of your life, what would it be?”

My most used rifle/cartridge is a .300 Winchester Magnum, but this isn’t the end-all rig for me. It’s great for North American game and for shots out to 1,000 yards, but it lacks horsepower for thick-boned, dangerous game in Africa. Hell, it’s not even legal to use on the Big 5 in certain countries and for good reason. The .300 Win. Mag. may be my favorite cartridge, but I need something different if there can be only one.

Enter the .375 Holland & Holland Magnum, the global Swiss Army knife of chamberings. The true do-it-all round.

The .375 H&H is an old reliable workhorse. You can find it just about everywhere because gun shops, hardware stores and outfitters have had 110 years to place an order for it. It’s a great killer for medium to big game out to 500 yards, and it’s both adequate and legal for killing all things on the Dark Continent.

As an all-purpose cartridge, it’s unbeatable.

So, what about that question? The rifle itself? The perfect killing machine?

It didn’t exist. At least not my version of it.

But I always thought it’d be an easy fix. In fact, I’ve had the design in my head for years. Picking the builder would be the hard part.

Until I visited the actual workshop at Griffin & Howe.

I won’t get too deep into the weeds on G&H, but it’s the most legendary name in the world of custom American hunting rifles. Its top-tier gun making skills have been utilized by some of the most notable adventurers on Earth.

The firm’s wood stocks are finely figured works of art; its metal engraving has no limits; its name has been synonymous with quality for 99 years.

Surely the legendary gunmaker could scrap all that ultra-high-end shit and build me one ugly, all-purpose killing machine.

And do it right.

First I met with the team at G&H and gave them my specs.  This rifle starts with a perfect action. For this, I requested a Defiance Machine custom action with the controlled round feed upgrade. We’re talking premier precision machining with ultimate reliability.

For the stock I chose a McMillan sporter in the old-school forest camo. It’s a bomb proof design, and the classic camo is that special kind of badass ugliness. This rifle needed to be capable of extreme accuracy for shots out to 500 yards. Easy choice. Bartlein barrel. 23 inches. With Iron sights. Nobody does iron sights like Griffin & Howe. They could do this part with their eyes closed. Finally, I ordered a barrel band for a sling.

For long shots a scope would be mounted. For thick brush, tracking and follow-up shots on wounded game a quick-detach option was spec’d out via the use of Talley detachable rings. When reattached, the scope remains perfectly zeroed.

The trigger needed to be top-tier and the mechanism had to be absolutely reliable, so the encased dust/weatherproof TriggerTech made my list.

For good measure I added a flush cup bipod system from Spartan Precision and the Field Ethos Long Haul Sling to the build requirements.

So how did the rifle turn out?

I got my hands on it for a few minutes at the Dallas Safari Club show. The construction, fit and finish were what you’d expect from Griffin & Howe. Perfect.

But on the range?

Mike Murphy, the head rifle instructor for G&H, called me yesterday when he walked off the range to tell me the rifle is shooting ½” groups at 100 yards with factory ammo. Mike is one of the best shooters I know, so when he’s impressed, I’m impressed.

I had Griffin & Howe make 20 of these rifles because I knew others would see them, look at the specs and realize it’s potential. I take delivery of the first one in late May 2022, and I’ll follow up with my own range report soon. Seventeen have already been sold–a large percentage of them to men I know. Real adventurers. Real killers.

The Field Ethos Adventurer Rifle. Get one.