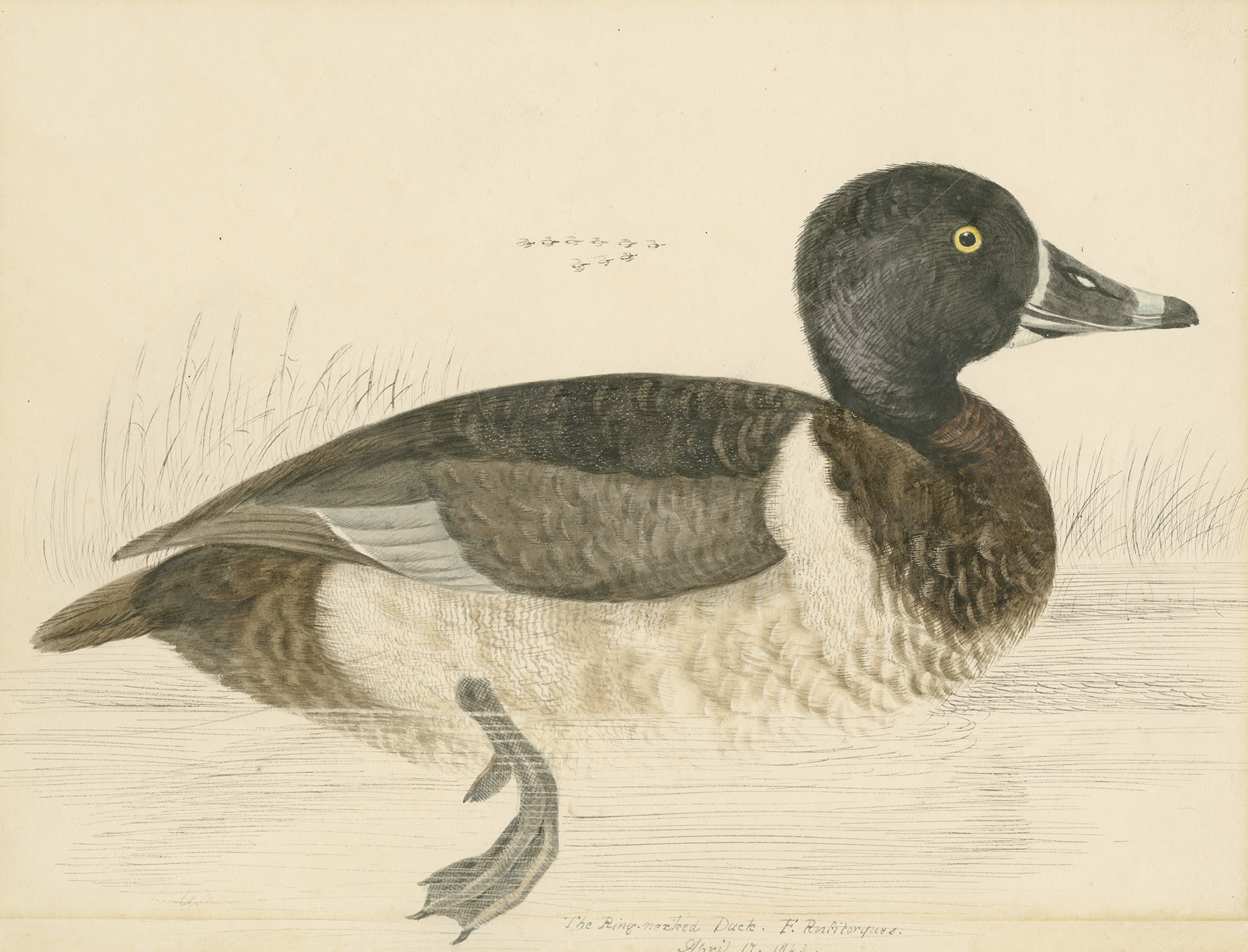 The eagle lit in a lone tamarack on the far side of the bay, eyed the proceedings, me and Leon and Capum Ed, hunkered in the cattails in a fourteen-foot Alumacraft, backs to the wind, a spread of decoys before us, waiting on the first fall flight of ring-necked ducks.

Ringnecks, we called them “ringbills” from the white stripe across the bills of the drakes, good eating. Northwest Minnesota, where the lakes and hills give way to the Dakota prairie, where the trees change from spruce and pine, to maple and birch to finally no trees at all. Big whitetails, bigger bear, the occasional errant moose, grouse of several flavors and a veritable duck factory.  Woodies and puddle-ducks mostly, you know mallards, widgeons and teal.

Season opened mid-October to a great fusillade but in a week or two the young and dumb birds were either shot out or educated, and an eerie quiet settled upon the woods and waters while we waited for the first blizzard to push the divers down from Manitoba, including the bills, both blue and ring, the cans and finally the whistling golden-eyes, the last arrivals, the wind off their wings like ripping canvas, like incoming artillery.  So, there we sat, me and Leon and Capum Ed, hunkered in that vintage Alumacraft, backs to the first skifts of wind-driven snow, while that lonesome bald eagle eyed the proceedings.

There was a warden in those parts we called the Big Swede, who liberally administered the Swedish Massage, a treatment you wished to avoid.  He kept an eagle eye on me, totally without justification, of course.  He carried a big-ass pistol.  He had a bionic ear, a parabolic mike on a pistol grip that could pick up a frog fart at a quarter mile.  Then there was this thingy with suction cups he stuck on the roof of his truck to tell him the direction of a gunshot.  The Big Swede flew his own Piper Cub and could see clean through a tin roof, some folks said.  He tracked me and I tracked him.  He wore a size twelve boot and walked on the outsides of his feet.

It all started by accident, when I bought a 200-pound sheep buck from a couple of bull-dykes who’d taken up farming a few miles down the road.  They tolerated the sheep buck as it bred their ewes, but once that chore was accomplished, they found his continued amorous antics politically incorrect and highly offensive and put him up for sale in the local shopper.  I drove over to load him up and that ordeal burned up most of the afternoon.  I finally shot him, dressed him out and threw him into the pickup, leaving a broad swath of blood down the tailgate.

As wrastling a sheep buck is apt to make a man thirsty, I picked up a flask on the way home.  Pulling onto the highway, I chanced a glance in the rear-view and, lo, a man in a green suit was running down the middle of the road, frantically trying to write down my license number.  I just laughed and shifted gears.

Had I known what I was provoking, I would have happily pulled over and showed him that sheep buck, but alas, I kept on driving.  After a couple of “chance encounters” I made myself a solemn oath—I would read the regs and I would abide by every dot and tittle thereof.  I would go to his retirement dinner and grin at him and never ever give him the chance to write me up, to give me the Swedish Massage.

But back to that duck hunt.  Those Manitoba ringbills had never been shot at, likely never even seen a human up close, but still were a bit skittish, circling and buzzing the blocks two, three, maybe even four times before setting wing and settling.  We hammered away and they kept coming.  Wasn’t long before we had a limit, six birds apiece, a generous plenty come plucking time.  I unloaded and cased my shotgun, a fine old Model 12 Winchester from about 1957.  Leon did the same. Capum’ Ed was about to follow suit when a lone ringbill hen splashed into the spread and Capum’ Ed killed it clean.

Leon kept mum.  He had his quota of the Big Swede too.

As if on cue, the eagle rose from his distant perch, swooped over the downed ringbills, and deftly snatched one from the water.  We watched it go.

Yes, I was mighty satisfied.  Was it a miracle?  Or was it just an eagle stealing a duck as they have been known to do?  Didn’t matter, we were legal again.

I kept that promise to myself.  I never got the Swedish Massage.  But I didn’t get to grin at the Big Swede at his retirement dinner.

It was invitations only.