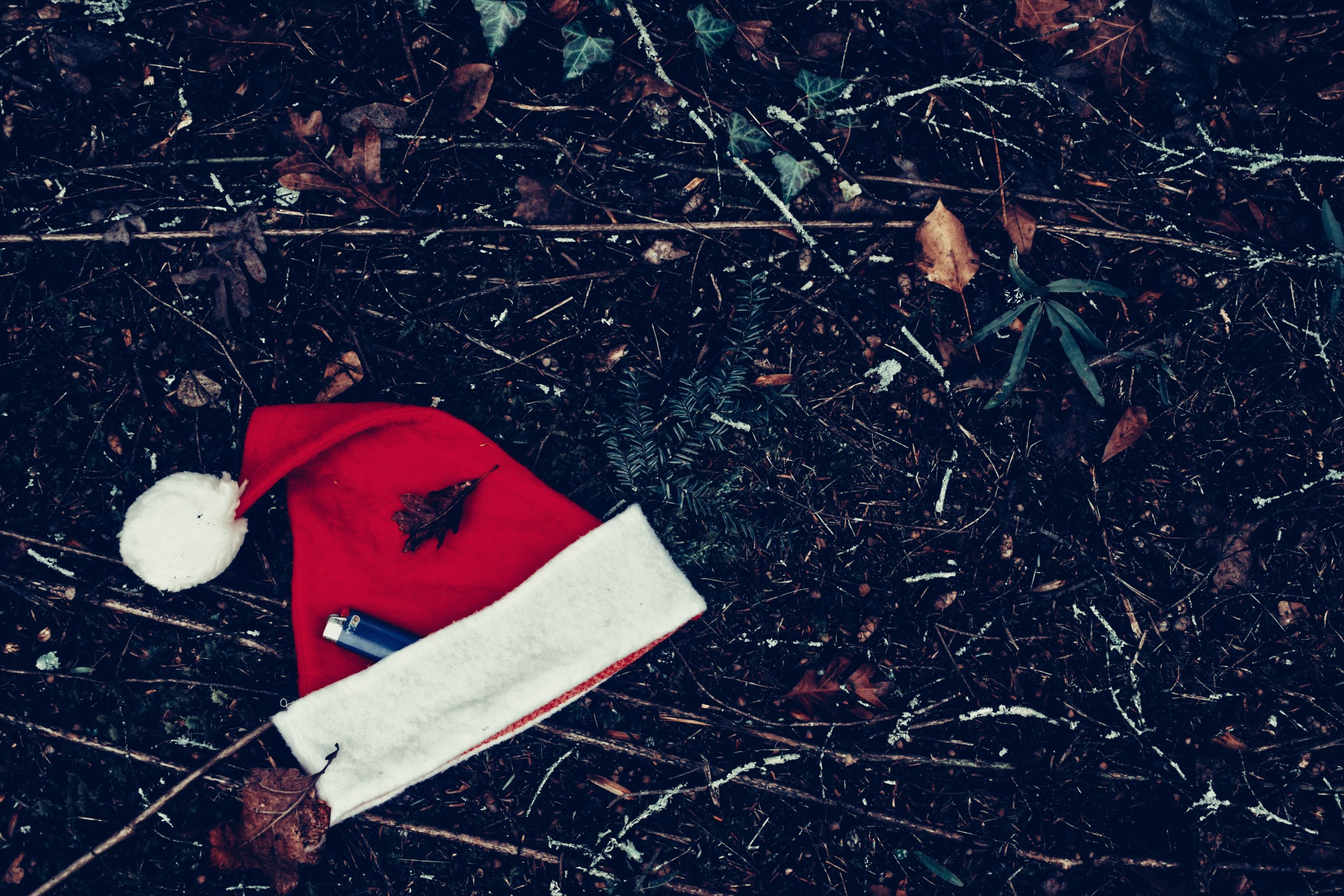 Lee Jack’s bearded face was ruddier than usual when he entered the café that morning wearing a soiled Santa hat. He noticed there was someone sitting in his regular booth situated next to the cricket box that was now decorated with a strand of multicolored Christmas lights. It was his uncle Chev.

Lee Jack also noticed a duck hunter sitting at a table with a little boy who was in his waders. They were the only other folks in the café. It was too early for duck hunters to be at breakfast. The little boy’s cheeks and eyes were red. He had been crying.

Instead of going directly to his booth to order, Lee Jack burst into the kitchen, gave the cook a scruffy peck on the cheek, and fixed himself a large Tupperware bowl of grits in which he plopped three dollops of butter and a link of smoked sausage.

Uncle Chev didn’t look up from his cup of coffee until Lee Jack had squeezed himself into the opposing booth seat.

“Morning, Chev,” Lee Jack said. There were bits of grits clinging to his beard. “You’re in here a might early.”

“Yeah,” Uncle Chev sighed. “I got a call to come talk with that duck hunter.”

“That duck hunter,” Uncle Chev answered, nodding in the direction of the man and his son.

Lee Jack craned his neck over his shoulder to look and was met by a scowling man and whimpering little boy.

“Oh! That fella … Well what did he want?” Lee Jack asked.

“He wanted to know why half of his decoy spread was shot to shit this morning,” Uncle Chev answered. “You know anything about that?”

Lee Jack replied with a mouthful of sausage, “Hell that’s my bad, Chev. I was paddling around in my canoe last night, poppin’ at nutria rats. One must have swam up in the middle of those decoys. My spot light was kinda dim, ya know?” He took another bite of sausage.

“Yeah!” Lee Jack answered and then bellowed loudly, “’Course a real duck hunter wouldn’t leave his goddamn decoys out overnight! Goddamn doctor!” He turned to the hunter and his son, “y’all wouldn’t have shot shit this morning, no way.”

Father and son got up from their breakfast, paid the gal at the counter, and left.

“That was real Christmas-like of you, Lee Jack,” Uncle Chev said.

Lee Jack ignored him, “All these damn doctors leasing up all the good holes around here. Hell you’d think there was a fuckin’ four-story hospital in town.”

Lee Jack perked up. “You did, huh? Well … I might just ease down to that hole tomorrow and try it out.”

“The hell you will,” Uncle Chev said sharply. “Firstly, I said I gave that fella his money back. He and his boy are going to hunt that hole until the end of the season so as to avoid any litigations; secondly, you owe me $300 for the decoys you destroyed that I just paid for.”

“Sonofabitch,” Lee Jack muttered as a dribble of grits fell from his lip. “You’d do that to me? Your own kin?”

“As much headache as you’ve caused? Damn straight.”

Lee Jack set his Tupperware down and looked at his Uncle Chev and said, “Merry fucking Christmas.”  He left the café without paying.

That night the Tropicana was lit up in full yuletide splendor. Flashing red and green bulbs were wrapped around the palm trees and hand railings. Gamblers had scrolled lewd cartoons and obscenities into the fake snow that had been sprayed onto the dark windows. The giant capital letters that spelled the word “TROP” shone like a signaling star above the main entrance.

Lee Jack parked his truck at the top of the levee and donned his dirty Santa hat. When he opened his truck door an empty bottle fell out and clinked its way down the incline of the parking lot playing plinko through car tires until it splashed into the Mississippi.

“Here Comes Santa Claus” in Elvis’ golden vocals resonated from the outdoor speakers as Lee Jack wound his way down through the parking lot and up the stairs of the casino. Lines of sweat glistened on his brow like tinsel, and he had no time for the regular rabble he knew from his frequent visits.

Nope, Lee Jack wasn’t at the Trop to make merry with his buddies and loose women who infested the place; That night he was locked in on the craps table determined to roll up the money he owed Uncle Chev.

Lee Jack loved dice. As a kid he would shoot them with the field hands behind Uncle Chev’s tractor shop when they were supposed to be working.

“I ain’t here to fuck around with y’all,” Lee Jack barked. “Just gimme some damn chips.”

Lee Jack handed over three crinkled $20 bills and set to his task.

In less than an hour, Lee Jack had amassed an impressive heap of chips and a tremendous drunk. The whole table was raucous and jolly. His eyes, like the dice, gleamed a candied red and the dingy white pompom of his Santa hat jingled with every roll.

But at the moment he should have cashed out, Lee Jack heard the dealer exclaim, “Changing $300!”

Through his gummy gaze, Lee Jack could just make out the slender figure raking over a stack of chips. It was the duck hunting doctor.

“What the fuck you doin’ in here?” Lee Jack growled. A trickle of brown liquor seeped through his bushy beard and onto his shirt.

“I wasn’t able to hunt this morning, so I thought I’d hit the town this evening,” the doc replied. “I saw how well y’all were doing at the dice table and decided to put in.”

“Of course you did,” Lee Jack said derisively. “Where’s your boy?”

“He’s back at camp with his grandfather. We’re going hunting in the morning.”

As quickly as Lee Jack had piled his winnings before, his chips fled from him like flaring ducks with each dice roll from the doctor’s skillful hands. And after being tossed out by security for charging at the doc like a rabid reindeer when his last chip was taken, Lee Jack sat in his truck at the top of the levee and slurred to himself, “fucking doctors.”

It was a silent night save for the tinkling of Lee Jack’s Santa hat and the crackle and pop of the fire. He felt the flames radiate on his rosy cheeks and in the depths of his spirit. He remembered the Sunday school story about Moses up on the mount and that burning bush talking at him and how Moses was happy. Lee Jack was happy, too.

But it wasn’t just the blaze itself that brought him joy. It was its reflection dancing on the ripples of the water as he skulled his canoe from decoy to decoy. He plucked each one from the spread, wrapped the weighted cords around their keels, and tossed them into the inferno.

When the last decoy had flown through the darkness to its fiery demise, Lee Jack laid himself in the bottom of the canoe and gazed at the stars as the fire glowed over the gunnel.

The next morning the duck blind smoldered like a charred shopping cart. Flocks of black birds crossed through the cypress slough. Lee Jack was peacefully asleep in his canoe which had drifted into a stand of cattails when the game warden found him. He was swaddled in his hunting coat with an empty gas can and liquor bottle at his feet.

Uncle Chev, the doctor and his boy, and a police officer stood mute as the game warden walked Lee Jack up the turn row. The chemical scent of melted plastic and smoke wisped through the air.

Before he was handcuffed, Lee Jack vomited behind the squad car using the bumper to brace himself. The pompom of his Santa hat jingled merrily as he daubed the bile from his beard.

The little boy began to cry.