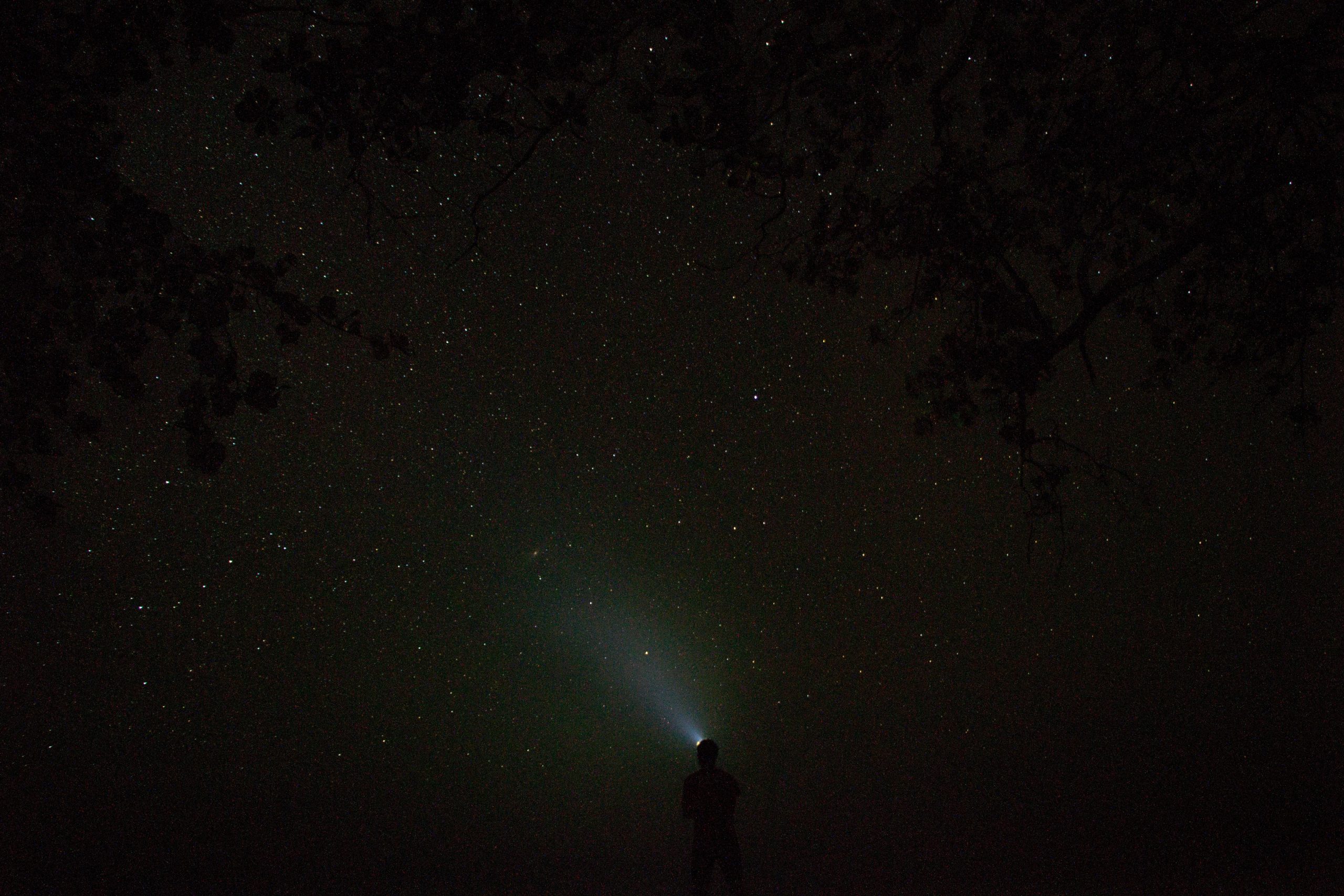 There was a story in the paper the day before I left detailing a wolf encounter in Eastern Oregon. A Rancher was out inspecting calves on foot when a few wolves began running laps around him. He was unarmed and thought it was going to be it for him. I’m not sure how the story ended though, because I didn’t read all of it, but now I sure wish I had as I crashed aimlessly through the pines, unarmed, in the dark, with the hind leg of an elk on my back. Not too far from where that rancher lives. And I’m alone.

It was the end of day 1 of archery elk season, and everything had been uneventful up until now. I’d accepted an invitation to a very secretive, tight-knit elk camp that had been going on every year since the late 60s. It being an invitation-only club, and having to swear to secrecy was enough to pique my interests–even accepting my role as the FNG. Being one of the younger people in camp and unrelated to anyone else in camp was quite a bit of pressure, but as long as I kept my head down and mouth shut, I figured all would be ok.

The camp was overseen by the son of the original leader; he ran things much as a war lord. My first night in camp was filled with liquor and stories of past members who had their invitations revoked. Every kind from poachers to perverts and drunkards to dickheads had cruised through camp, wore out their welcome and were dispatched faster than a rogue Clinton staffer. “Just don’t piss him, or anyone else off, and you’ll be fine,” a veteran member said to me. I took that to heart as I realized the elk quarter I carried belonged to the camp warlord. Whoops.

In fact, he was the only one to have shot, or even had seen, a bull that day. Keeping with the tradition of respecting one’s elders, every member of the group canceled their plans of pulling the cork or heading to bed early, and instead trudged into the woods in search of the downed bull. It was a good looking 5×6, which for this area is fantastic. As an army of knives and headlamps descended upon the carcass, meat was loaded onto pack frames as guys would pack the two miles back to the trucks in pairs, so–you know– no one would get lost.

I had other plans.

Wanting to prove my worth, I volunteered to carry a hind quarter out, to which no one argued. I loaded up the 75-pound leg and, instead of standing around like I was on vacation, decided to head back up toward the truck. Alone.

After following a series of trail markers, I began to realize that all the trees looked the same. After about 20 minutes, I realized I was lost not only mentally but geographically. After another 30 minutes, the guys at the trucks started counting and realized they were one hind quarter short.

Staying put when lost is a decent rule, but not when you are trying to impress a group of guys 40 years your senior. I kept moving, thinking the wolves would soon be on me and I didn’t want to die sitting down. That’s about when a red-haired Air Force SERE instructor came running downhill toward me. He was from our camp, and somehow he’d sized me up and figured which way I would head.

A few days later and after the ribbing (somewhat) subsided, I said my goodbyes to everyone, thanking them for the opportunity. The last hand I shook was that of the warlord who asked if I would be back next year. I told him I would.