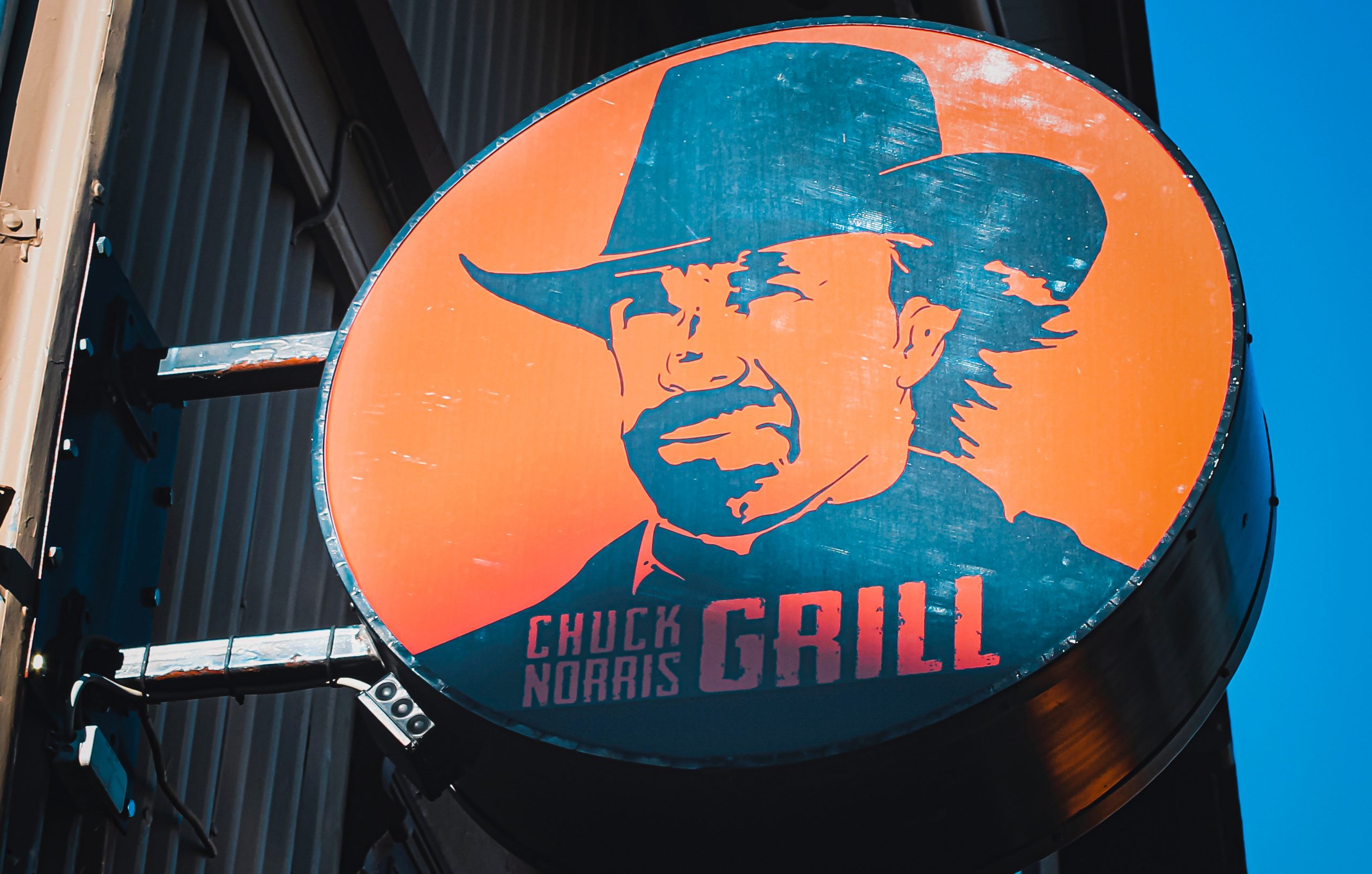 Chuck Norris is the archetypical American badass, both on-screen and in real life.  MacGyver, on the other hand, was an 80s gimmick character whose contrived anti-gun views made the entire premise of the show as ridiculous as one of Nancy Pelosi’s press conferences. I’m gonna be honest, this isn’t going to be much of a battle. Still, like an SEC football team taking on a non-conference opponent, we must go through the motions before we get to the playoffs. So let’s kick it off and get this over with.

Let’s start with a category that is remotely competitive. Both of these guys believed in the “business upfront, party in the rear” hairstyle that Mr. Black himself sported during his misguided teenage years. These locks, feathered and flowing, epitomize this amazing time period in human history. Mac loses points for his overuse of gel and his frosted tips while Norris’ current hair looks to be augmented a bit, possibly using a marmot pelt.

Chuck Norris has wielded every firearm imaginable during his long career on both the silver and small screens. If we had to pick one, though, Field Ethos endorses the dual micro UZI on a Desantis leather shoulder rig setup that a sleeveless Chuck used to hose down commies in 1985’s Invasion U.S.A. Does it get any more ‘Merica? No effing way.

MacGyver was famously anti-gun, carrying only a Swiss Army knife as a weapon. You read that correctly; a “secret agent” with nothing but a three-inch blade. Norris could put two full magazines of nine-milly into Mac before he got that can opener out of his pocket.

Chuck Norris is a black belt in judo, tang soo do, and Brazilian jiu-jitsu. He even founded his own discipline, called Chun Kuk Do. Real-life Chuck held numerous karate titles including the All-American Karate Championship and the International Karate Championship. Word is that they waited to start the UFC until Chuck was retired from martial arts to keep it fair.

Since MacGyver is scared of guns, he must be a stud with his hands and feet, right? Well, as part of my research I watched an episode where a fistfight ensues. He was getting his ass handed to him before he slung sand in his opponent’s eye. He also seemed very vulnerable to head kicks, an area where Chuck excels.

Where do we start? The real-life Norris served as an Air Policeman in the U.S. Air Force, no doubt roundhouse kicking drunken airmen on weekend nights to keep the peace. In film and tv, Norris has played a Delta Force commando, a Texas ranger, a CIA Officer, and a Vietnam POW. If you haven’t seen Norris pop out of a Vietnamese river with his belt-fed M-60 going to town, I don’t know what to say to you.

In the show, there is some talk of MacGyver being a bomb-disposal technician in Vietnam. With no disrespect intended to real-life EOD heroes, this can’t measure up to Norris because Norris once defused a bomb by yelling at it sternly.

Going back in the 80s, Norris has been a proud and patriotic American. “I am a conservative, a real flag-waver, a big Ronald Reagan fan,” he said without fear of being canceled. Years later, when the Obama Administration made its move against the Second Amendment, Norris didn’t mince words, “It is imperative that we take action now, lest we doom … our posterity’s right to bear arms only to a constitutional piece of paper that sits under glass at the National Archives.”

Richard Dean Anderson, the actor who played MacGyver, bragged about how much of a cuck he was after finding his show in the NRA’s crosshairs. “I couldn’t have been prouder than to be on the NRA’s hit list … there’s some pretty despicable attitudes coming out of that organization.”

His views weren’t just part of his television character, either. While Norris was standing up to Obama, Anderson was contributing to his reelection campaign.

Going back to Invasion U.S.A, Norris sports a double-denim look that would make a trucker proud, with a sleeveless shirt unbuttoned to show off his impressive chest hair. No matter how tight the jeans (he actually wore his own brand of “Action Jeans” that had an elastic crotch) Chuck was ever-ready to kick an SOB in the face at a moment’s notice. Cowboy boots? Yes, please.

My problem with MacGyver’s attire isn’t the look or function, it’s the hypocrisy. You see, Mac is a “Save the Whales” kind of guy who doesn’t eat meat. That’s right, our lefty hero was a vegetarian before it was cool. If you want to eat lettuce, be my guest, but when you do it while wearing a leather jacket, I call bullshit and knock you off your moral high horse. One other thing: He wears white sneakers.

Chuck has so many, but for me it will always be the climactic scene in The Delta Force when he races his armed dirt bike down the runway to hitch a ride with the rest of his squadron on a moving airliner, popping wheelies while playing chicken with armed terrorists. After laying waste to the enemy, Chuck stands on the seat of the moving motorcycle, grabbing onto a rope lowered from the aircraft. His mates pull him on board just before the plane takes off to leave Beirut. I think “Colonel, it’s the major!” every time I see a guy with a mullet on a motorcycle. (A bit of trivia here: the actor who is piloting the plane at that moment is none other than former Marine Bo Svenson, who played “Ivan” in Magnum, p.i. He is the first individual in Hero vs. Hero history to appear in two “finest moments.”)

Remember that scene in Raiders of the Lost Ark when Indiana Jones shoots the sword-wielding bad guy and the epic fight lasts about a second? That’s what I’m picturing here, though with lots more hot brass flying. Even if Chuck leaves his guns in the truck and decides to hand out a Texas bare-knuckled ass-beating, Mac doesn’t have a chance.