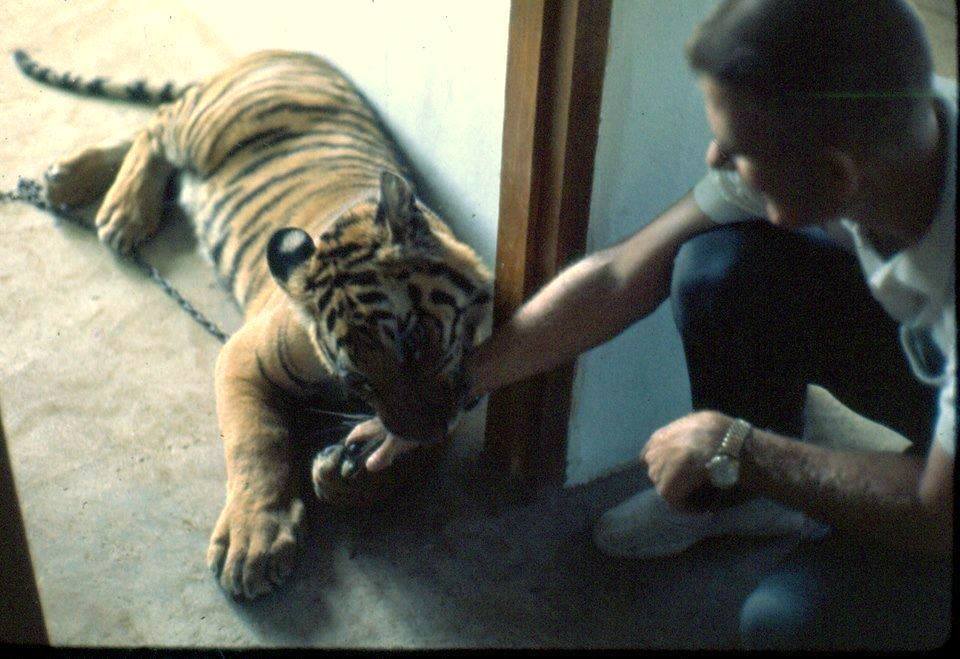 All other tigers suck!

You know Tony the cereal pitchman…

The one who plays golf, cheats on his wife with strippers, and wrecks cars…

And the one from Oklahoma who sports a mullet, married two men at once, and now resides in prison for animal abuse and for putting a contract out on Carol Baskin…

But do you know Bubba?

Yes, Bubba the Tiger, the most epic tiger of them all.

Bubba was discovered by Warren Castaneira and a few fellow soldiers after the little tiger’s mom went to that big jungle in the sky via some explosives.

“We lived with and flew in support of these Green Berets out of Forward Operating Base (FOB)-2 in Kontum Vietnam 1967-1968,” Castaneira recalled. “In August of 1968, we heard an explosion and found a mommy tiger tramped on a land mine and was killed. She had a week-old cub that I scooped up and got him to accept some liquid. Well, he not only survived to grow up into a full-grown big boy who was the most spoiled baby ever. He loved an occasional bowl of beer and ate most anything put in front of him. He was loved by all the Special Forces guys who came near him. If Bubba wanted to crawl in your bunk, he did. He loved…the attention he always received.”

Yes, Castaneira and his men found a tiger while fighting in Vietnam, adopted him, and let him roam free where they lived. They fed him, gave him upwards of two cans of beer a day, and occasionally used him in interrogations.

“The coats and ties back in Langley, VA couldn’t understand how our intel was so accurate. Picture an NVA prisoner strapped into a chair and being questioned. Also, picture the prisoner telling us in multiple languages to go F— ourselves. So, a hood goes back on and the prisoner was told to spill the beans or we were going to feed the zip to our tiger. They all laughed their asses off and said we were crazy. Enter the Bubster and we’d have his head about two feet from the prisoner, pull the hood off– at the same time, I would pinch the back of Bubba’s neck. He roared in the dink’s face with his extremely nasty tiger breath and the prisoner usually pissed his pants or worse while he sang like the Mormon Tabernacle Choir.”

Despite Castaneira’s and his fellow soldiers’ love for Bubba, the group was faced with a major problem when the Vietnam War came to an end.

What to do with a monstrous tiger?

“When we cycled out, the question was, what the hell to do with Bubba? He couldn’t survive because he only knew SOG, Special Forces, Seals, etc. Here is where we got creative. We had access to things normal military didn’t. So, we got creative and a phone call went to a research zoo in Sydney, Australia and we asked if they wanted a ‘free tiger?’ When the lady at the other end realized we were for real she pissed her pants and said, ‘Yes, but how do we get him?’

“I don’t want to reference Air America, but we flew the Bubster to his new home and I got off the airplane with him walking beside me like a dog on a leash. They all went nuts when he walked to the lady and heeled by her side looking at her for instructions. He must have had a very good time and life there because he sired tons of babies.”

“When I was back in Sydney in 87, I saw a bronze plaque telling about the SF Tiger that came to them in 1969 and made lots of great baby tigers.”

You were far better than all those other tigers the media worships!

In case you didn’t get the first few lines…

Mike the Tiger from LSU.