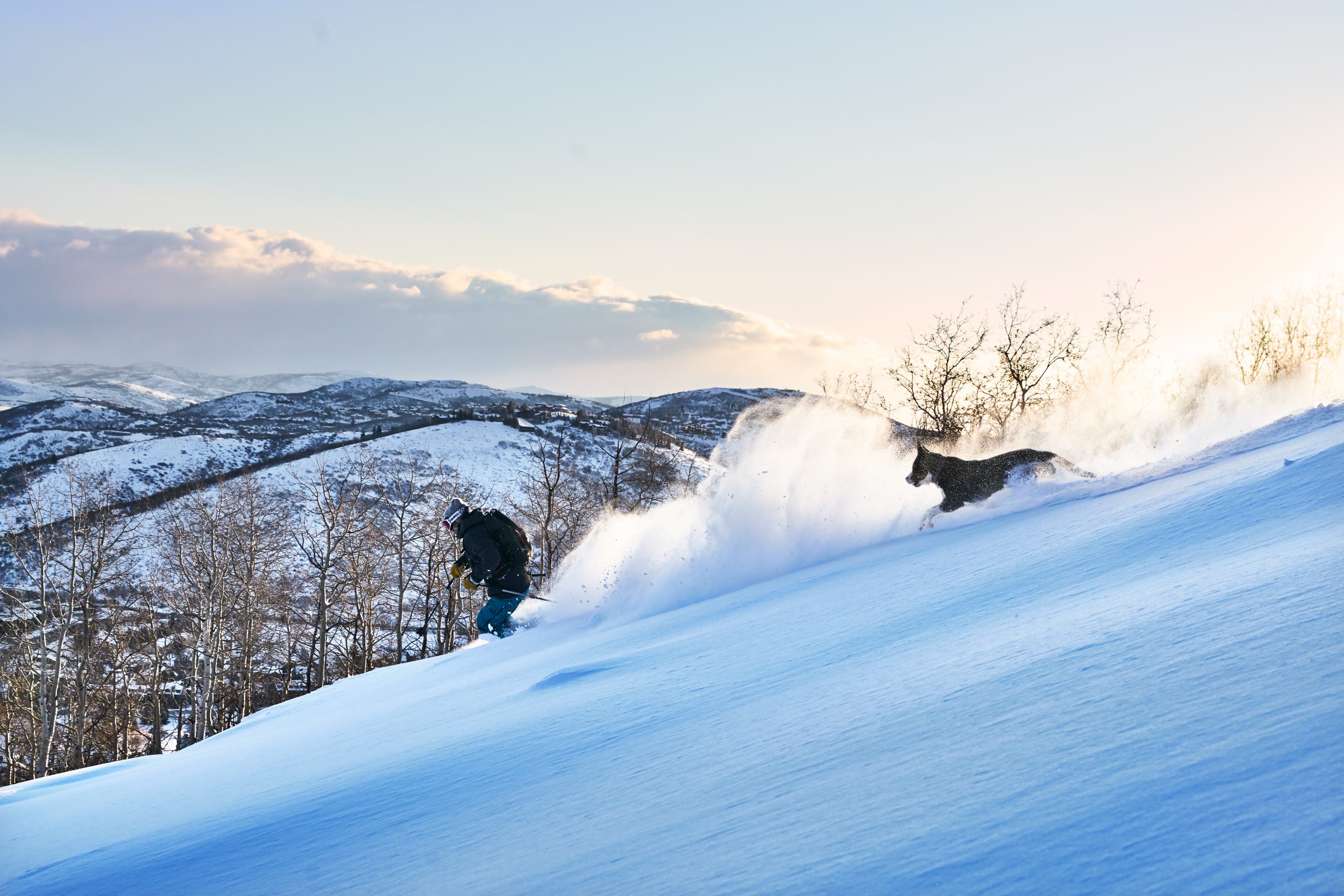 I clipped out of my skis, stepped out into waist deep snow, and started hiking back uphill toward the commotion. Barron, my 4-year-old Swiss Mountain Dog, limped toward me on three legs, eyes wide with terror.  His front right leg hung limp. From 30 yards I could see that it was peeled open, revealing bone, tendon and some major arteries which were now spraying blood all over the previously pristine mountainside.

My friend Evan, having recovered from the collision, pulled up and lifted his goggles.

“Dude … he jumped right in front of me.”

“I know. Not your fault. We just have to get him out of here.”

The mountains are my gym. And my dog is my constant training partner. Nearly every day you can find us skiing, biking, running, or scouting for elk and mule deer in the mountains around our home in Park City, UT.  We’ve faced off against protective mother moose, skirted avalanches, and outrun lighting storms more than once. Yet in our years of adventures we’d never sustained more damage than a few porcupine quills.

But that’s the thing about adventures. Shit can happen anytime, anywhere.

And today was a shit sandwich.

We were in a race against time, and at 3pm on a Saturday, professional help would be limited-to-non-existent. I checked my cell phone for service.

Remembering the ping of incoming text messages just a few minutes earlier at the peak, I tossed my phone to my friend Jaclyn.

“Climb back up until you get service. There are three or four vet offices in Park City. Find one that’s open, tell them what happened and that we are an hour out and to please stay open for us.”

We were 15 miles from town: three to four miles on skis, four miles by snowmobile and seven by truck. I don’t think we’d ever done it in under two hours before. Now I had to do it faster–while carrying a human-sized dog.

I looked at Evan, a California guy who’d never swung a leg over a snowmobile in his life. “Make sure the walkie I gave you is on; ski down to the Polaris and call me. I’ll walk you through how to start it. Drive up the road as far as you can or until you meet me. Don’t leave the groomed road or you’ll get stuck, and we won’t make it.”

Turning my attention back to my dog, I pulled my Uncharted Triage Kit from my chest pocket and removed two zip ties, gauze and duct tape. Breaking a small branch from a pine tree, I went to work on my dog. He flinched and whined as I re-assembled his loose muscle and skin, wrapped it in gauze and then made a tourniquet from the zip ties. I twisted the branch, now a windlass rod, cinching down the zip ties and slowing the loss of blood, then duct taped it all in place.

My frozen, crusty, blood red hands shook as I threw everything back into my pack and clipped back into my skis. I laid my right side into the mountain, shoved my head under my dog’s stomach, grabbed both sets of legs, and somehow got upright. His 115 pounds sunk my skis further into the snow.

I pointed downhill and prayed for strong legs. If we could just get to the snowmobile… .

Roughly an hour later, we pulled into the vet’s office in my truck.  Evan drove as I sat in the backseat, trying to keep blood loss to a minimum. Barron nodded in and out of consciousness.  Four nurses approached with some sort of dog gurney, put a muzzle over Barron’s mouth, sedated him and quickly disappeared behind swinging doors.

There was nothing left for me to do, and a wave of emotion hit me.  My bloody hands left red streaks across my face as I wiped tears from my eyes. My blood-soaked ski gear stiffened with the dropping temperature.  I sat on the curb, holding Barron’s collar, and watched the sun slowly pass behind the same distant peak from where we’d come. I wondered if I’d see my buddy alive again.

An hour later the vet stepped out.

“He’ll be ok, but he lost a lot of blood, so we’re going to keep him overnight.” The vet continued: “I don’t know how you got him here so quickly, but you literally had a few minutes to spare before we wouldn’t have been able to save him.”

A few days later, Barron came home, cast and all. Despite the deep ski cut, all tendons were intact. He made a full recovery after a few weeks of forced rest.

This morning, Barron and I completed our daily run along a ridgeline trail overlooking a basin that holds elk, deer, and an occasional moose. His slight limp and a six-inch scar are all that remain from that fateful day last winter.

As I crest the last big climb, I stop to catch my breath and re-adjust my weight vest.  A cow elk and her calf cross the trail ahead of us. Barron pops to attention, but doesn’t chase.

“Good boy.” I tell him as he relaxes his gaze, trots ahead a few steps and lifts his leg over a pile of fresh coyote scat.