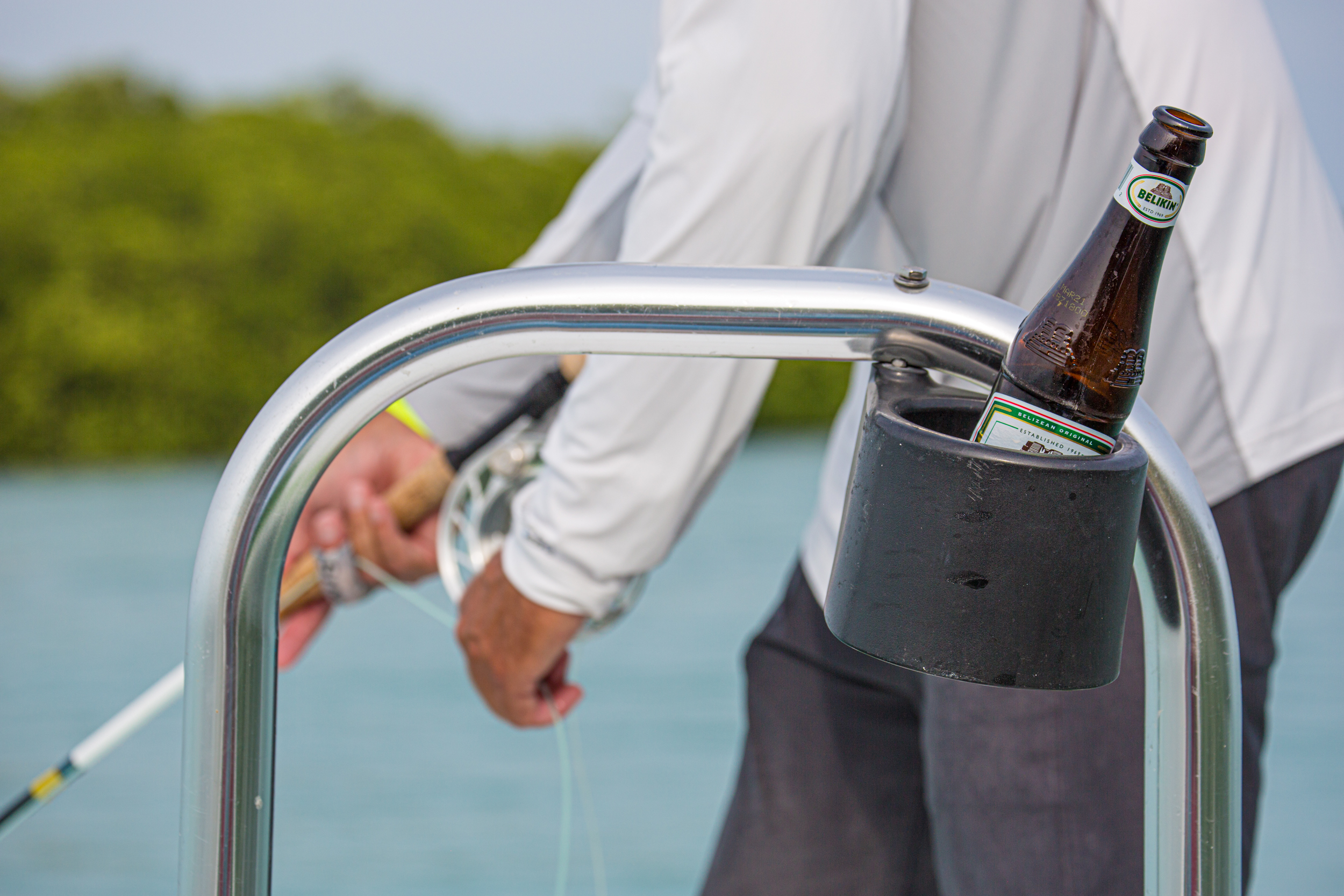 We’d left the dock before dawn, the first of 16 boats to hit the water for the day. Bryan and I had been waiting in the darkness for Cesar, paper cups of coffee balanced with rods and cameras.

Coffee doesn’t steam in the tropics. It’s something that always strikes me as strange but makes perfect sense when the overnight temperature lingers somewhere around 81F with 8,000- percent humidity.

The lodge security guards, burly Belizeans who lurked in the shadows with flashlights and radios, had given us friendly nods as we passed on the way to the dock. They knew enough of me to understand I ran around with cameras at all hours. The fact I’d acquired a new early-hour fishing friend was apparently unsurprising.

It was also readily apparent he had either mad skills or a stupid amount of good karma.

In the four days he’d been in Belize, he’d landed nine tarpon. For a trout angler from Colorado, he was putting in a fine showing.

Hence our early-morning coffee on the dock.

The hum of Cesar’s panga sounded above the lulling waves crashing on the nearby reef, and we spotted his running lights zipping in from town.

Time to get to work.

Armed with coffee and breakfast burritos we climbed aboard, stowed the rods, and headed south. The short channel cutting through the heart of San Pedro which led to the inland side of the island—and the good tarpon channels south of town—was dead quiet as the light grew from periwinkle to a milky orange.

We wolfed down our breakfast, made a game of who could spot the most bamboo chickens (aka iguanas) in the mangroves, and shared lodge gossip from the night at the bar.

Tarpon were on our collective brains.

Before the sun fully crested the horizon, we were posted up on a channel looking for rolling tarpon. Bryan on the bow, Cesar on the poling platform, and me standing on the cooler. All eyes on the water.

There’s a magic hour for tarpon in northern Belize. It’s the same reason the serious anglers and guides meet up at 0430h before the rest of the world is awake. If you can be at the right spot, in the right dawn light, you’re pretty damn likely to see rolling fish. And the sight of rolling tarpon is enough to make you forget how much you wanted to throw your phone into the wall when the alarm went off that (night?) morning.

We all spotted the rollers at the same time. Ten o’clock, sixty feet. An easy cast for Bryan.

The purple tarpon toad launched into space, dropping into the water just up and across from where the fish had last rolled. Strip—strip—strip.

Bryan yanked violently with his left hand, the rod remaining low to the water.

A nice tarpon—maybe 45 pounds…nothing to write home about, but a tarpon nonetheless—jumped out of the water and Bryan bowed, pushing his hands forward to release tension on the line while the fish was out of the water. As soon as the fish was submerged and fighting again, he had it back on the reel.

Cesar appeared at my side, grinning in the orange-red dawn. These are the good days for a guide; a relaxed, skilled angler and a few friends in the boat. Bryan knew what to do. I was busy shooting images. Cesar was orchestrating it all with the skill of a Vienna concertmaster.

Daylight grew. A morning shower passed overhead. None of us really noticed or cared.

Less than 20 minutes later, the fish was at the boat. A few pictures, a few laughs, and it swam off again.

Bryan and I looked at each other, and then glanced at our watches.

It was 0727h, not too early for a celebratory boat beer. Bryan grabbed a Belikin and popped it into the lean-bar drink holder, barely pausing before he was casting again, plumbing the depths for the tarpon’s big brother. Cesar and I exchanged a smirk. Our newfound trout friend was well and thoroughly into the saltwater obsession now. We settled back to watch, shifting into familiar battle positions before the next fish to come along.

And Bryan? He’d go on to finish the week with 14 tarpon, including one topping 100 pounds. We still reminisce about it at the lodge, and he’s trekked back several times with his young son Trevor, who gives his dad a run for his money on the fly rod.