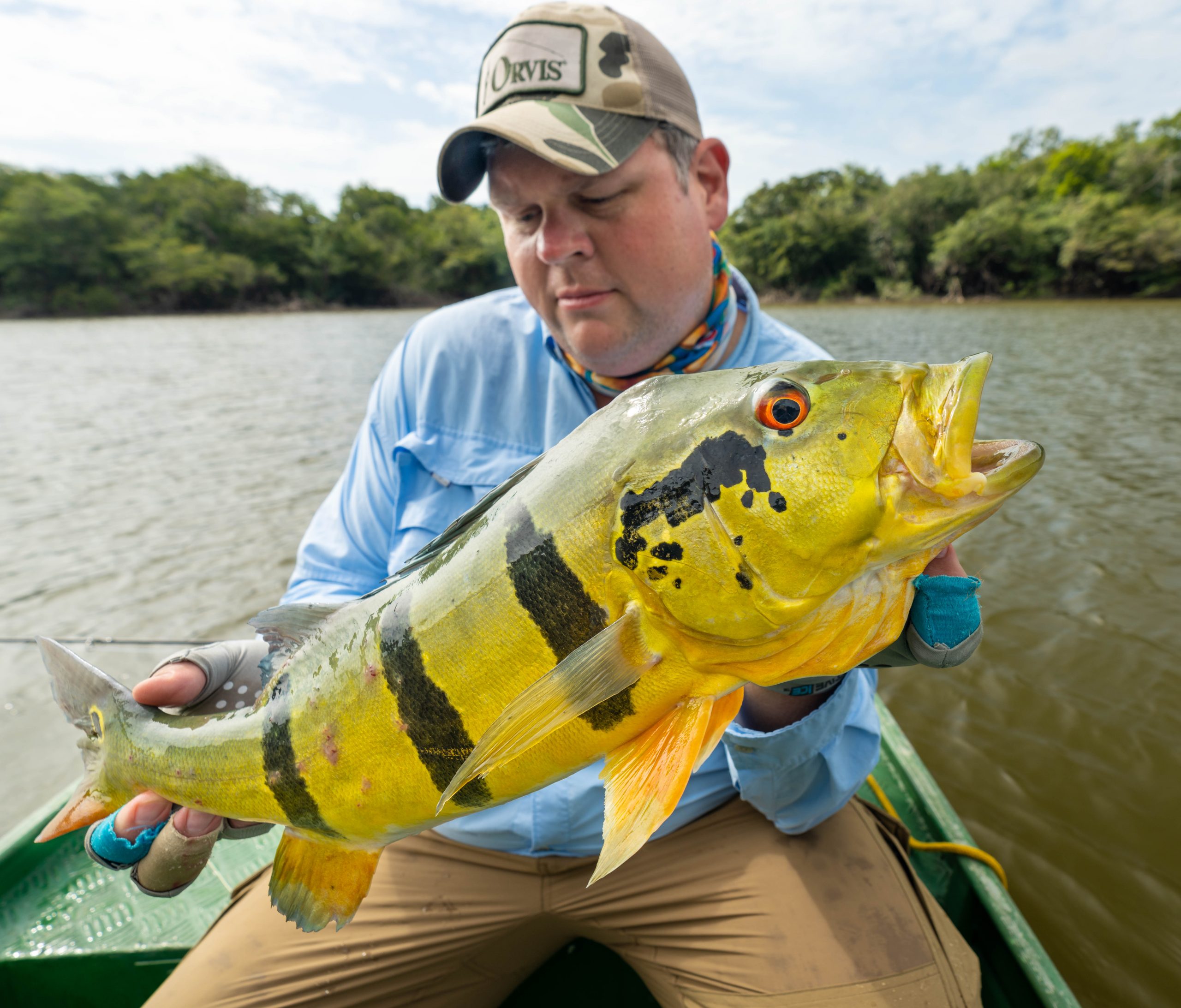 Before planning my trip to fish for Peacock Bass, I was already aware of one thing:

They eat anything they can fit in their mouth and don’t quit chasing their prey until it has been caught; even returning to repeatedly attack. The two-pound baitfish they pursue jump out of the water to avoid the onslaught. They have a better chance with the herons on the bank. It is hazardous to be at the bottom of the food chain in the Amazon Basin, but it’s a hell of a place to fly fish.

After a six-hour flight from Miami to Manaus, followed by a 200-mile charter flight to Agua Boa Amazon Lodge, it’s time to get on the water. On arrival, bags are put away and fly rods are made ready for the first encounter with neon. The first peacock slams my streamer and feels like it weighs eight pounds judging by the fight, but might tip the scales at only four pounds at the boat. These fish don’t give up and their brethren chase them to the boat, trying to steal their food. Peacocks are not bass, but cichlids, a completely separate family of fish. The fish shakes its head and it sounds like rocks hitting the bottom of the boat, but it’s just parasitic gill lice being shaken free. The lice are about the size of your thumb and look like cicada larva. Everything eats everything in the Amazon.

It isn’t often you find a place where catching three to five-pound fish is routine. When a peacock eight pounds and up is caught, it’s a “good fish.” In a week’s time, it’s very likely to land a double-digit fish, with a big fish approaching 20 pounds for the week out a group of 10-12 anglers. Of course, when you think about the fact that in a week, you will fish 70 miles of river and several lagos, the odds are in your favor it will be a good week.

The Agua Boa and the várzea forest surrounding it abounds with life. The river is home to peacock, butterfly peacock, arowana, arapaima, payara, piranha, oscar, bicuda, jacunda, redtail catfish, stingray, giant river otter, and pink river dolphin. These species are surprisingly easy to catch or see while fishing. The jet boat ride each day alone offers innumerable opportunities to see a multitude of avian life including five-foot-tall jabiru storks, toucan, muscovy duck, blue and yellow macaw, curassow, parrots, shorebirds, and herons. Caiman are very common; so much so that every sandbar has a caiman on it.

If you’re lucky, one might follow your catch to the boat for a close-up view. If you’re really lucky, you may catch a glimpse of a jaguar on a sandbar as you’re riding along the river. Unlike other big cats, jaguars are active day and night; they are always looking for a caiman or a capybara to munch on. There is never a shortage of wildlife to see while on the river.

The Agua Boa is best fished during low water in the dry season in February or early March. As part of the Rio Negro River system, the Agua Boa flows south out of northern Brazil and is moderately sized to its confluence with the Rio Branco. Although a blackwater river, the Agua Boa gets clear enough to sight fish for peacock bass. With clear water and plentiful peacock bass, the Agua Boa is one of the premiere clearwater peacock bass fisheries in the world. It is exhilarating to see a 16-pound peacock bass come up to the surface and destroy a popper fly. It looks like a stick of dynamite exploded on the surface.

All that fish fighting and heat can only be remedied with a cold caipirinha at the dock on arrival at the lodge. Drop your gear at your cabana, take a dip in the pool (with more caipirinhas at the pool bar), and get ready for a lovely meal in the main lodge featuring local cuisine. After dinner, walk outside and look for foxes that hang around the lodge grounds on your way back to your cabana. If it’s a clear night, look up after most of the lights have been turned off to see an amazing night sky with views of the Milky Way and too many stars to count. Rinse and repeat for the remainder of the week and the memories will last a lifetime.

Lyrics from Jesse Woods’ cover of A Thousand Miles from Nowhere come to mind: “I’m a thousand miles from nowhere – Time don’t matter to me.”

When you’re in a remote corner of the Amazon Basin, time doesn’t matter until the charter plane lands at the end of an utterly amazing week to take you back. If you love wild places, you will be back.