A Dead Pygmy’s A Problem 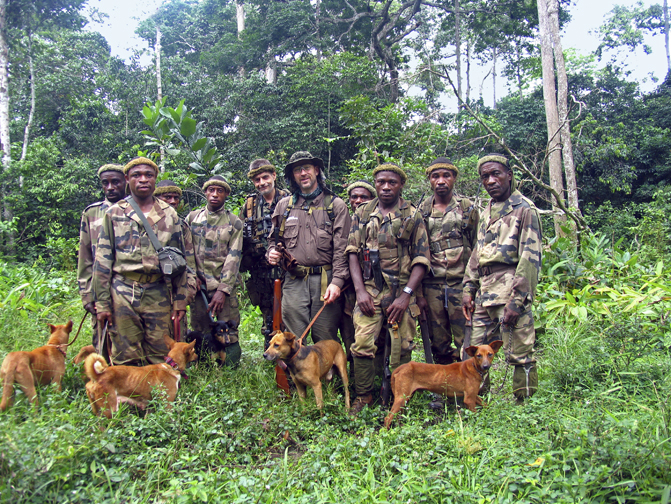 A gut-shot pygmy thrashing in the mud is a problem. He’s fast bleeding out, and when he squirms his last, you better scoot. His brethren will be pouring out of the forest for revenge, all armed with machetes.

Machetes are to pygmies what a swagger stick is to a British sergeant-major—a symbol of your authority, manhood and prestige, all in one. All male pygmies carry a machete. Everyone is personalized, the blade ground on rocks to a unique shape and sporting a custom handle wrapped with strips of inner tube, leather or bark. Toss a dozen in a pile and 12 pygmies will unerringly pick out their own distinctive machete. And if one actually comes at you with his lovingly groomed, two-foot long razor blade, you better fucking run. Or shoot, which is what happens here.

This particular pygmy’s adversary was Geoffroy de Gentille, an African professional hunter working for Mayo Oldiri Safaris in the remote rain forest of Cameroon, close to the border with the Congo. Geoffroy ran a forest camp for hunting bongo, dwarf buffalo, forest elephant and the rarest prize of all, forest sitatunga.

Geoffroy was the son of a French naval officer. Between his upbringing and serving briefly in the French Army, Geoffroy assumed a military bearing in all he did, especially how he ran his camp. Among the other PHs at Mayo Oldiri, he was nicknamed “The Pygmy General.”

When I arrived at his camp, he was standing in front of his men, the entire camp turned out for the parade, all in a straight line standing at attention. His trackers were dressed in woodland camo BDUs with matching olive drab sweat bands around their heads. The uniform of the day never changed, and Geoffroy dressed identically, except he carried a lot more kit—compass, a big knife, several smaller knives, a Glock 10mm in a thigh-rig, a walkie-talkie, pruning shears, first aid kit, canteen, and more. He didn’t rattle when he walked though, everything was snapped or tied securely. Geoffroy was squared away.

But things have a way of going to hell in a handbasket unexpectedly, and that’s what happened on the day Geoffroy was driving to the nearest village for supplies. The only roads in the rain forest are made by timber companies for their logging trucks. Giant mahoganies grow in the forest and the lumber companies transport them on big rigs. When the 18-wheelers are empty, coming to load up a tree, drivers can earn a little extra cash by picking up hitch-hikers. Geoffroy passed just such a truck. Who did he see hitching a ride on the flatbed but three poachers with big sacks of dried bushmeat, and, of all goddamn things, a local policeman.

“Shit!” spat Geoffroy. “Son of a bitch! A policeman with poachers!”

The incensed French professional hunter stomped the brakes, spun his Toyota around and gave chase, quickly pulling over the astonished truck driver. Geoffroy unleashed a torrent of French profanity at the driver, pointed to the sacks of bushmeat, grabbed them and heaved them into the bushes.

Turning on the policeman, Geoffroy spewed forth with Pattonesque-style, chew-ass for riding with three poachers and doing absolutely nothing about their contraband!

By now the three poachers had scrambled from the truck and were recovering their sacks of bushmeat. Geoffroy turned on them and let fly with every vulgarity he could muster, kicked the sacks over and made it very abundantly fucking clear they were not getting their nasty-ass green meat back.

As the realization dawned on the lead poacher that his month of illicit snaring was about to come to naught, he flipped out. He grabbed his machete and waved it angrily at Geoffroy, shouting pygmy curses in defiance. Threatened with a machete, The Pygmy General reacted instinctively: He executed a smooth draw, presented his Glock 10mm at the low-ready, glared back at the poacher. The pygmy saw the gun and instantly lunged. Backpedaling, Geoffroy fired a warning shot into the ground which prompted the pygmy to charge.

Geoffroy shot the little man in his belly with a jacketed hollow point. Pandemonium ensued. The pygmy fell screaming. The other two poachers immediately hightailed it into the forest, the driver jumped in his truck and sped away and the policeman stood there dumbfounded.

Geoffroy loaded the dead poacher and the policeman in the back of his truck and raced to the nearest police station, a checkpoint on the logging road close to the village. Luckily he knew the sergeant in charge and after explaining what happened—which the useless policeman at least corroborated—he made ready to leave.

“No, no!” interjected the sergeant. “The village, they already know. They are waiting for you, they kill you.”

Geoffroy proposed going back to his camp and retrieving his hunting rifle.

“No, no!” warned the sergeant. “They go to your camp, they kill you! You must hide, get away.”

Geoffroy took the advice and hid in the forest for three days while the enraged pygmy population burned his camp, destroying everything, even killing his pet chimp he’d rescued from other poachers.

The pygmies dragged big logs onto the grass landing strip by the village, the only way into the forest other than the logging road. No plane landing now. They had plans for the Frenchman, once they caught him, which they would. It’s their forest.

But don’t count your PHs out until they’re hacked to pieces and stewing. Geoffroy had grabbed his sat phone from his truck when he beat feet. He called the manager of a nearby lumber mill where the massive mahoganies were cut into manageable trunks. The lumber mill had its own landing strip for staff and supplies.

“Hide in the forest tonight. I’ll have a plane here in the morning,” the manager ordered.

The plane came, Geoffroy got out. He immediately reported to the French Embassy in Yaounde, told his story and asked for sanctuary. They got him on the first available Air France flight back to Paris.