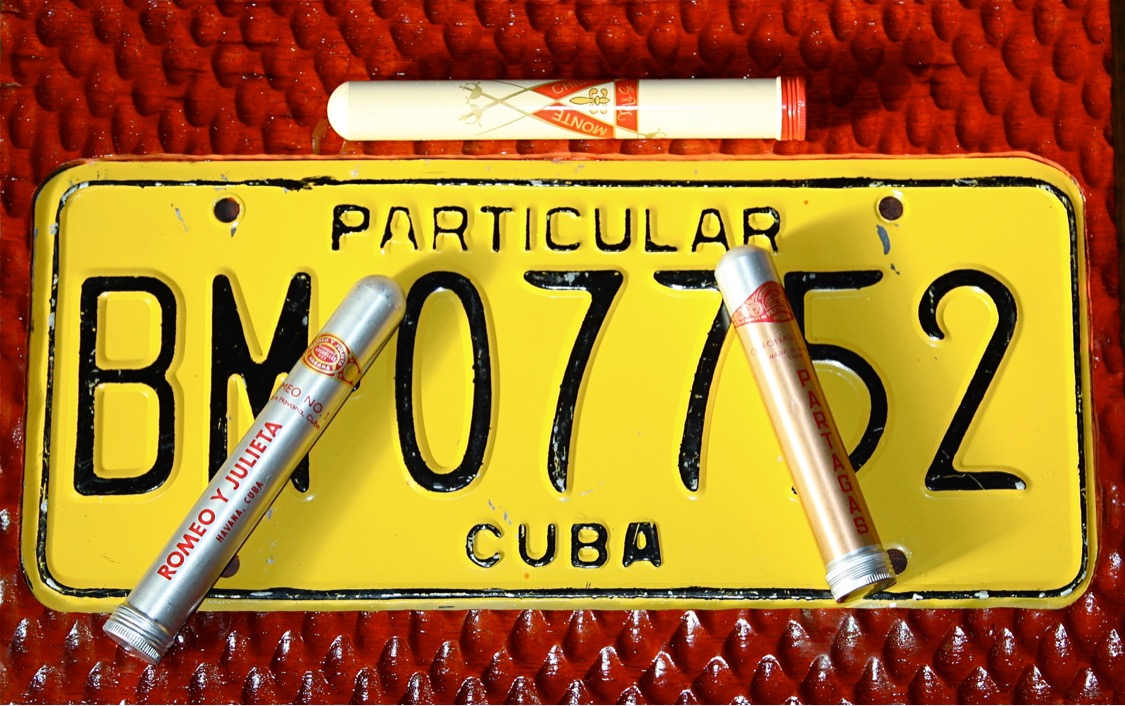 Due to my overzealous generosity, whenever I’m smoking a cigar I often offer one to anyone who happens to be nearby (which explains why I have so many “friends” hanging around). But invariably my golden shrine of goodwill is tarnished by two questions that are almost always asked:

To which I answer, “No, it’s a crappy cigar, the worst one I could find, because I only smoke great cigars, and that’s why I’m giving this crappy one to you, you festering puddle of snail slime.”

They usually get the message and either thank me profusely (realizing their social blunder) or slink away to find a rock to crawl under.

This equally ignorant question requires a more lengthy response, because anyone who knows anything about Cuban cigars wouldn’t be asking it. For one thing, they smell and taste differently than non-Cuban cigars. For another, they are horrifically expensive, often running $100 or more a stick, especially now that Habanos–the marketing arm of Cubatabaco–has ruthlessly raised their prices by 20 percent or more, especially on their more coveted brands, such as Montecristo, Hoyo de Monterrey, Romeo y Julieta, H. Upmann and Partagás. Plus the rarer limited editions, such as Cohiba, Trinidad, Montecristo 1935 and Romeo y Julieta Línea de Oro have been jacked up even more. Why? Because they can.

After all, Cuba has a stranglehold on its cigars because, well, they can only be made in Cuba. And to complicate matters, the worldwide supply has been dramatically shrinking, because Covid has pretty much reduced Cuba’s cigar making workforce by half, as the pandemic is rampant in that island nation. In addition, the supply chain boondoggle that has been emptying shelves of pretty much everything has also affected Cuban cigars. And finally, because there is only so much quality soil on which Cuba’s farms can grow quality cigar tobaccos, there is a physical limitation to the number of Havana’s finest that can be produced–even during the best of times.

Besides, ever since the embargo began in 1962, it has been illegal to sell any Cuban product in the United States–and that, of course, includes Cuban cigars. That means we are now a nation where much of the population has never smoked a genuine Cuban cigar. Yet counterfeits comprise over 90 percent of the “Cubans” that are sold in this country. After all, who would know the difference?

But even those aficionados who are well versed in the genuine article can be fooled. Sometimes these counterfeits sport authentic Havana bands and boxes that have been smuggled out of the factories; other times, the deception is not so clever, but always the tobacco is inferior–it may not even be Cuban leaf–and is probably rolled in some shady character’s apartment or garage.

Which brings us to the problem of quality control. Even with genuine Havanas, there is all-too-often a lack of consistency. I’ve had Cubans that I’ve purchased from legitimate sources (i.e., European tobacconists and in overseas duty free shops) that were so tightly rolled you risked sucking your face in trying to get that first puff. Others were wrapped with tobacco that was under-fermented, and as a result, smoked as bitter as your ex-wife.

That’s not to say all Cuban cigars are bad; when they’re good, they’re great. In fact, one of the most memorable cigars I ever had was firing up a genuine Cohiba Esplendido with my friend Richard Paterson, who was the long-reigning Master Distiller at Dalmore in Scotland. We had just finished attending a gala black tie dinner in Edinburgh and upon returning in the wee small hours to the hotel, were informed that smoking was not permitted inside. Undaunted, and in spite of the fact it was bitter cold, we went outside and sat on the curb by the hotel’s entrance and lit up. But not before Richard produced a bottle of Dalmore King Alexander III and a couple of paper cups. After all, who needs crystal when you’ve got a genuine Cohiba?

But on my first weekend back in the States, I poured a Dalmore 21 Year Old Scotch whisky as I sat on my front porch and fired up a Nicaraguan Padrón 1926. Not a Cuban, to be sure, but with the same meaty flavor, a guaranteed easy draw, and a whole lot cheaper than a Havana.