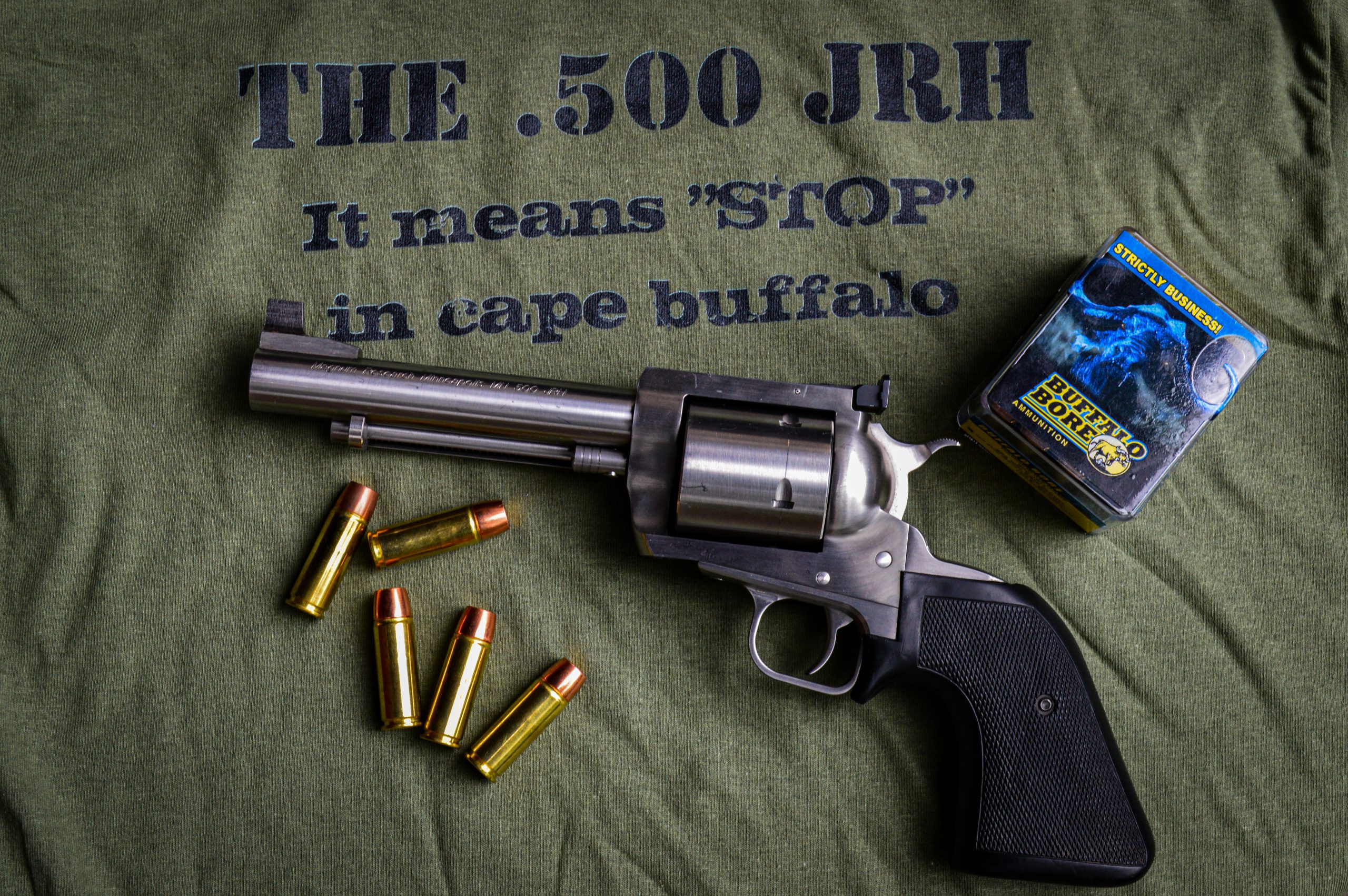 You bet your ass it can.

In recent years the big- and dangerous-game rifle hunters have embraced the concept of the flat-nosed solid for uncompromising straight-line penetration. That’s great, but handgun hunters have known it for decades. We typically get more than adequate penetration by using these flat-nosed bullet profiles at considerably lower velocities than, let’s say, a .458 Lott. While the aforementioned rifle round will certainly impart an immeasurable quantity of shock to the animal, we know for a fact that holes through vitals kill. So, while a large caliber rifle may exhibit more than adequate penetration, a big-bore revolver–loaded correctly–will also exhibit more than enough penetration on even the largest of game.

I hunt big-game with big revolvers that on paper don’t produce enough horsepower to squash a fly at 50 yards–at least that’s the manure the gun media has been peddling for decades. “Fill-in-the-blank foot pounds of muzzle energy is required to cleanly and humanely take fill-in-the-blank game,” they pen. If I hear one more expert say I need 1,000-ft.-lbs. to kill a deer, I’m taking it out on the cat. (That I don’t have a cat is irrelevant.) The point is, it’s bullshit.

Case in point: My “weak-kneed” .500 JRH BFR (single-action revolver) delivered seven feet of penetration on a chest shot on a Cape buffalo including an end-to-end poke through the rumen. In fact, my PH stated that he has never seen a Cape buffalo succumb to gunshots as quickly as mine. … Okay, so maybe he was blowing smoke up my ass, but it was a matter of seconds between my first shot and the buffalo doing a face-plant in that dry South African dirt.

In my humble opinion, these handguns are definitely adequate; the question is whether or not you have the chops to succeed with a short gun. You see, it requires a lot of practice to get good enough and stay good enough. It requires spending less time on the couch, drinking beer, and watching Kardashian reruns while your mid-section expands. Oh, and there is the recoil you’ll need to get past. Well, you never really get past it, but you should grow accustomed to it if you are to be successful. So it comes back to that practice requirement.

You need to be honest with yourself as far as your limitations are concerned. These big-bore revolvers can be very difficult to shoot because they kick like psycho hose beasts. Instead of feeling shame if you can’t handle the biggest of hand-cannons, the prospective handgun hunter should take pride in being able to shoot his/her chosen revolver well and effectively. Confidence and competence will go a long way to filling the freezer.

But the real draw, at least for me, is the challenge. I.e., getting close enough to smell the bad breath of your quarry. Obviously, with practice, you can kill game at reasonably long distances, but that’s not the essence of handgun hunting–for me. In the realm of hunting, bowhunters are true badasses. They get close–real close–out of necessity. Why not incorporate that skillset and “thrillset” into your hunting regimen? It puts field craft front and center, making you become a better hunter. It’s a harder row to hoe for sure, but the level of satisfaction that comes with a successful hunt is colossal.

Is a big-bore revolver big-game medicine? Emphatically yes–if in the right hands. And if you know your hands are right for the handgun, and you accept the challenge of hunting with one, hunt with it! And make no apologies.

The 10mm Was Made for Gunfighting