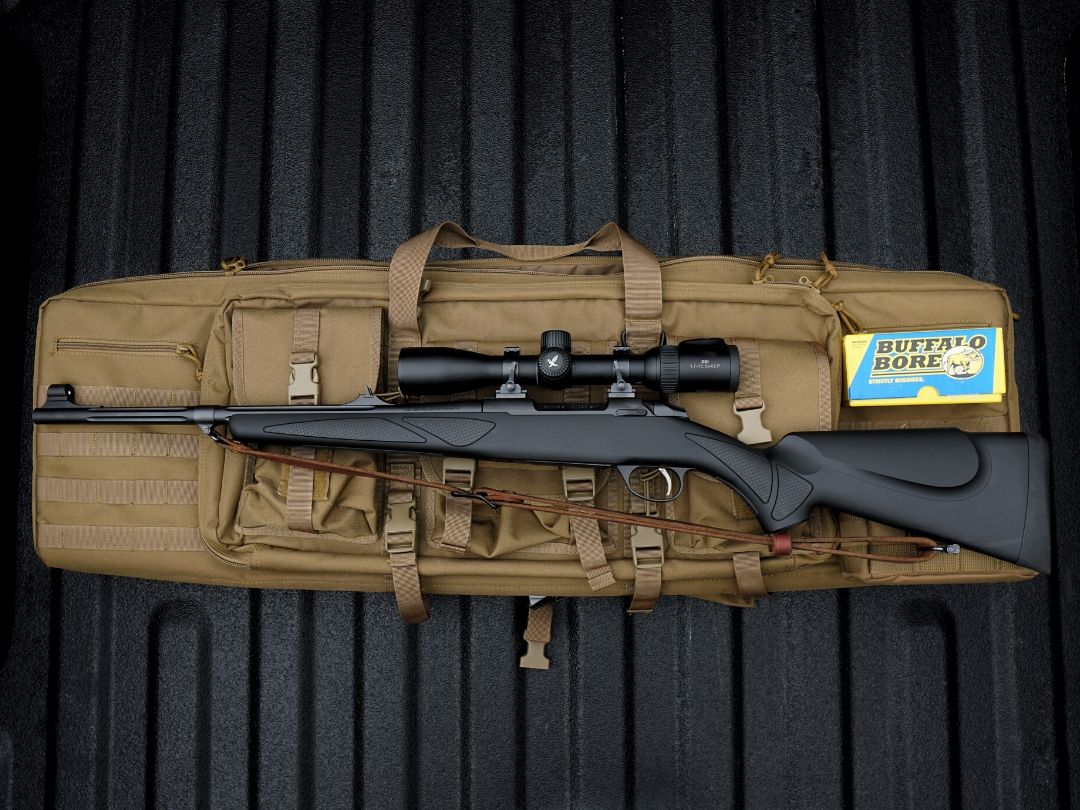 The Sako 85 Black Bear in .308 Win. shoots sub .33 MOA groups with factory ammo -so it falls into the “Extremely Accurate Rifle” category. There, now that’s out of the way.

The Finland made Black Bear was chosen as the second gun in the Tough Times Truck Rifle series for several reasons. First, it has iron sights that set it apart from the Bergara Highlander reviewed in the last truck rifle article. Second, it has a five round detachable magazine so it can be loaded or unloaded very quickly. Lastly, the Sako 85 action has a controlled-ish feed operation -it’s not a controlled feed action in the Mauser sense, but the extractor does engage the case rim before the whole mechanism goes into battery. This is nerd-talk for saying that the feed process is slightly more controlled than a standard push feed Remington 700 style action…which is already pretty damn reliable. Kudos to the Finns for doubling down on dependability for a rifle designed to kill bears and angry European boars.

Since you already know the rifle can shoot, let’s cover the rest with broad strokes -starting with the stock.

The only feature on this rifle that I don’t love is the stock. Nothing about it seems like it should’ve been chosen for a rifle that sells for a street price of $1,798. To be fair, Sako’s synthetic stocks are far nicer than most plastic stocks, but when you pay north of $1,500 for a rifle you should be bumping up to a rigid fiberglass stock design.

The rest of the gun is basically perfect for the task of a Truck Rifle. Remember, we’re looking for a hunting and defense worthy rig of a handy size that can be easily concealed in a truck.

The compact-length medium contour 20” barrel on the Black Bear is fluted -with the exception of the area where Sako mounts a banded sling stud. This option is far more secure than a normal stock mounted stud design so you’ll never have this rifle falling backwards from your shoulder onto its scope because the sling stud popped out of the stock. Yes, I’ve been on a trip where this happened to a friend.

The iron sights on the Sako are very visible and they’re mounted high enough to see over the Talley Bases. This gives you the option to use the Talley Quick Release Steel Rings so you can switch from shooting with a scope to shooting with the open iron sights in less than five seconds. It’s always a plus to have irons as a backup and they’re great to hunt with in thick brush.

The flush mounted detachable magazines on the Sako 85 rifles are perfect. There’s a lot of spring resistance when you insert the magazine into the magwell which accomplishes two things: security and stealth.

To dump the mag you have to press it upwards and simultaneously use the release latch. This two-step operation means the magazine will never drop free from the rifle on accident. Second, the spring pressure also holds the magazine very securely in place so there’s zero noisy rattle between it and the rifle.

The trigger on the Black Bear came set at a clean 3.5lbs and the fit and finish of the rifle is perfect so nothing to dive in to here. Everything on the construction side of the Sako is good to go.

On the range the Black Bear greatly exceeded expectations. I mounted a Swarovski Z8i 1.7-13.3×42 for two reasons. If your truck rifle is ever needed for defense the illuminated 1.7x magnification will allow you to quickly operate at close range while the 13.3x will easily take you out to 500yds in hunting scenarios.

I shot four different Buffalo Bore factory loads on the range. The two standouts were the 175gr Sierra BTHP which averaged .3275 with the smallest group being a cloverleaf .252” cluster. The other load worth mentioning was the 150gr Spitzer which measured .522”.

If you happen to work at EuroOptic.com please tell your boss I’m not sending this rifle back after the review but also thank him for providing the gun for testing. You guys are the tits…now send me the bill.