Thomas Fitzpatrick and the Two Flights to Remember 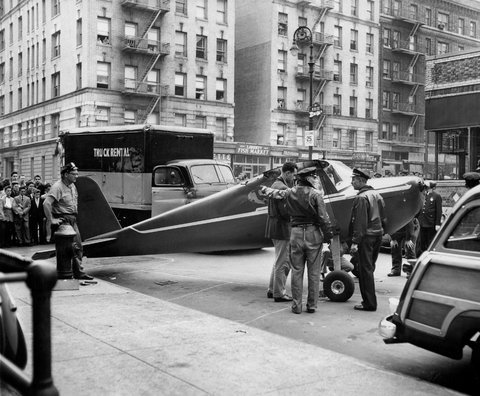 Thomas Edward Fitzpatrick stole an airplane and landed it on a street in New York City while deeply intoxicated and in response to a barroom bet.

He repeated the landing two years later when someone doubted that he did it the first time.

Little is known about Thomas’s life prior to his epic flights other than he was born in Washington Heights, Manhattan, New York on April 24, 1930, and that he lied about his age so he could enlist to fight in World War II. He joined the US Marine Corps at the age of 15 and fought in the Pacific Theater. After being discharged two years later, he joined the US Army and was stationed in Japan. He was on his way home stateside when the Korean War broke out, and he was quickly thrown into combat where he became the first person from New York City to be wounded in the Korean War. According to one report, “he was wounded while driving an ammunition truck to rescue some American soldiers trapped by Communist fire.” For this, he received a Purple Heart.

After serving his country in two different branches of the military and in two different wars, Thomas entered civilian life. He enrolled in flying school at the Teterboro School of Aeronautics in New Jersey and later became an airplane mechanic.

On September 30, 1956, Thomas had a few drinks at a tavern in Washington Heights.

Ok, probably more than a few.

It was during this drinking episode that someone stated that no one could make it to the Heights from New Jersey in 15 minutes. Thomas took the bet and quickly left. He made his way to Teterboro School of Aeronautics, “borrowed” a single engine plane, and flew it without lights or radio before landing on St. Nicholas Avenue near 191st Street at 3:00 am.

Thomas told the authorities he had engine problems and that he wanted to land the plane in a nearby park but that it was too dark. Despite stealing a plane and landing it on a narrow street in New York City, Thomas was fined just $100 after the plane’s owner refused to press charges.

The New York Times called the flight a “feat of aeronautics” and a “fine landing,” especially considering Thomas landed the plane on a narrow street boxed in by high buildings, parked cars, lamp posts, and the occasional mailbox. Sgt. Harold Behrens of the New York City Police Aviation Bureau said the odds against making a landing like that were 100,000-to-1.

And those odds were probably given for a sober pilot!

Thomas repeated his landing two years later when on Oct. 5, 1958, he landed a “borrowed” red-and-cream single-engine Cessna 120 on Amsterdam Ave near 187th Street. This time the flight was made because a patron in the bar where Thomas was drinking – yes, he was drinking again – stated he didn’t believe Thomas had actually made the first flight.

This time, unfortunately, the law came down hard on Thomas. Judge John A. Allen sentenced Thomas to six months in prison, stating, “Had you been properly jolted then, it’s possible this would not have occurred a second time.” Thomas responded to the sentence saying, “it’s the lousy drink” that caused him to the make the flight.

Today, Thomas’ legacy lives on in the story of his two flights and in the cocktail known as the “Late Night Flight.”